Ongoing economic crisis in Lebanon is politic at its core, experts say 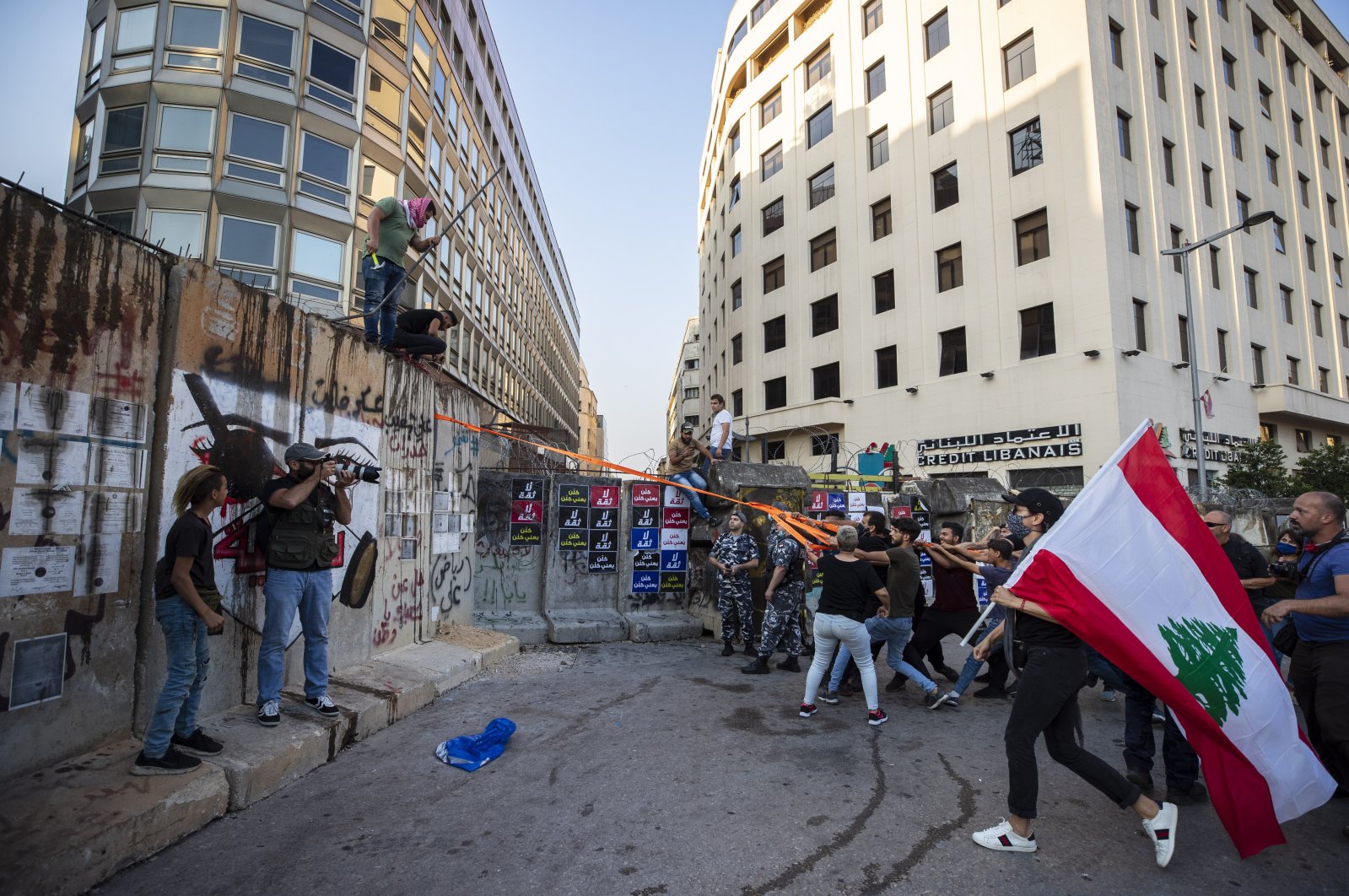 Anti-government protesters try to remove a concrete wall that was installed by security forces to prevent them from reaching the government palace in Beirut, Lebanon, July 2, 2020. (AP Photo)
by DAILY SABAH WITH AA Jul 09, 2020 3:26 pm
RECOMMENDED

The ongoing crisis in Lebanon, which is on the brink of intrastate armed conflict, is not economic as it may seem but is rather political, which hinders serious and swift reforms to ease people's woes, according to Lebanese political experts.

The economy has been devastated even after the incumbent Cabinet, led by Prime Minister Hassan Diab, was formed in late January following the departure of the Saad Hariri government in October, in the face of unprecedented anti-government protests over an economic crisis, described to be the worst since the 1975-1990 civil war.

Despite the coronavirus pandemic, the Lebanese people continued taking to the streets after reports emerged of at least four people committing suicide in June due to economic problems.

"There is an attempt to depict the problem as an economic issue, but it is political with distinction," Makram Rabah, a history professor at the American University of Beirut, told Anadolu Agency (AA).

Lebanon faces a challenge to restore the "state's sovereignty" to initiate a political and economic reform, Rabah argued, referring to the influence of political powers on the government and failure to get over the domestic rift, caused by sectarianism that has shaped the political scene for years.

The country was devastated by a bloody 15-year-long civil war which began on April 13, 1975.

Under the 1989 Taif Accords, which ended the country's civil war, cabinet portfolios are shared between the country's main ethno-religious groupings, with six portfolios reserved for Sunnis, six for Shiites and three for Druze.

"The Lebanese citizens want quick solutions and this economic collapse leads to a state of loss and even potential famine and starvation," Rabah stressed.

The purchasing power of the Lebanese people has drastically dropped as 3,500 Lebanese pounds are officially trading for just $1, but in the black market, $1 is traded for about 9,000 Lebanese pounds, after a sharp decline in the past weeks.

"The main problem was not Hariri's departure, but rather the ruling elites and the existing quota system," the Lebanese academic said.

He added that the application of the quota system, which is involved in administrative and political designations, "affirms that the government is not independent even though it contains experts. This is not enough."

According to Rabah, a transitional and independent government is vital to overcome the current crisis. And during the transitional state, disarming the influential Shiite group, Hezbollah, would be beneficial since Lebanon has been distanced from the Arab World – which used to support it financially but not anymore.

"Lebanon is punished currently due to the policies of Gebran Bassil (former foreign minister) and Hezbollah," he said, stressing that Lebanon needs to maintain good ties with the Arab states and the international community "except for Israel."

However, "for the sake of objectivity, the main problem is not Hezbollah, but the concept that Hezbollah protects corruption."

"Hezbollah was a catalyst that hastened the downfall," he said, adding that such political classes use "Hezbollah's weapons to protect their greed and, in return, give Hezbollah a political cover which led the country to this tragic situation."

For his part, political analyst Moufid Mostafa touched on the lack of independence of the incumbent Lebanese government, calling it "the government of Hezbollah."

"The most prominent challenge the government is facing today is that it is the government of Hezbollah and its allies and therefore the Gulf states do not want to support them," Mostafa told Anadolu Agency.

He pointed out that the government has failed in talks with the International Monetary Fund (IMF) to take a loan, citing "their inability to meet the required reforms."

What is going on?

After the 2008 global economic crisis, Lebanon reconstructed its economy on foreign deposits and investments. It had offered high-interest rates, leading the country to eventually become a center for foreign investors to deposit their fortune.

In other words, the Lebanese economy became dependent on foreign capital.

As the Central Bank of Lebanon tried to control money flow by offering high-interest rates, this policy caused an unsustainable growth of the banking system.

The Lebanese banking system became heavily dependent on loans given to the government and gains from the interest rates. Funds gathered from foreign investors were invested in stocks and bonds.

Eventually, the money flow started to slow down and came to a standstill with the coronavirus pandemic. As the government was not able to pay its debt, banks were not able to pay the gains earned by the customers with high-interest rates.

The result: the economic circulation got into a deadlock.

The Lebanese pound has lost over 70% of its value since October, while around 60% of the nation is expected to drop below the poverty line until the end of the year.

The pandemic has deepened the economic crisis, said Mostafa, as it "greatly affected the money (transfer) of (the Lebanese) expatriates that were flowing from abroad which was a major supporter of the Lebanese economy."

The political expert doubted that efforts by the government including subsidizing commodities and supporting the poor would resolve the crisis.

"All of these solutions are a local anesthetic; unless the crisis is resolved at its foundation, all these steps are temporary and useless," he asserted, saying a political reform is a key to the issue.

"It is very difficult to overcome the crisis in light of the current political components, even impossible," Mostafa said.

According to the expert, forming a new government that could deal with IMF and other donor countries to obtain loans would be a short-term solution as swift solutions are urgent for the Lebanese citizens, including support for the electricity sector "which constitutes the largest deficit in the government budget."

On the other hand, "the second long-term solution is to establish a new Lebanese system that establishes a civil state far from sectarian and political quotas," Mostafa added.