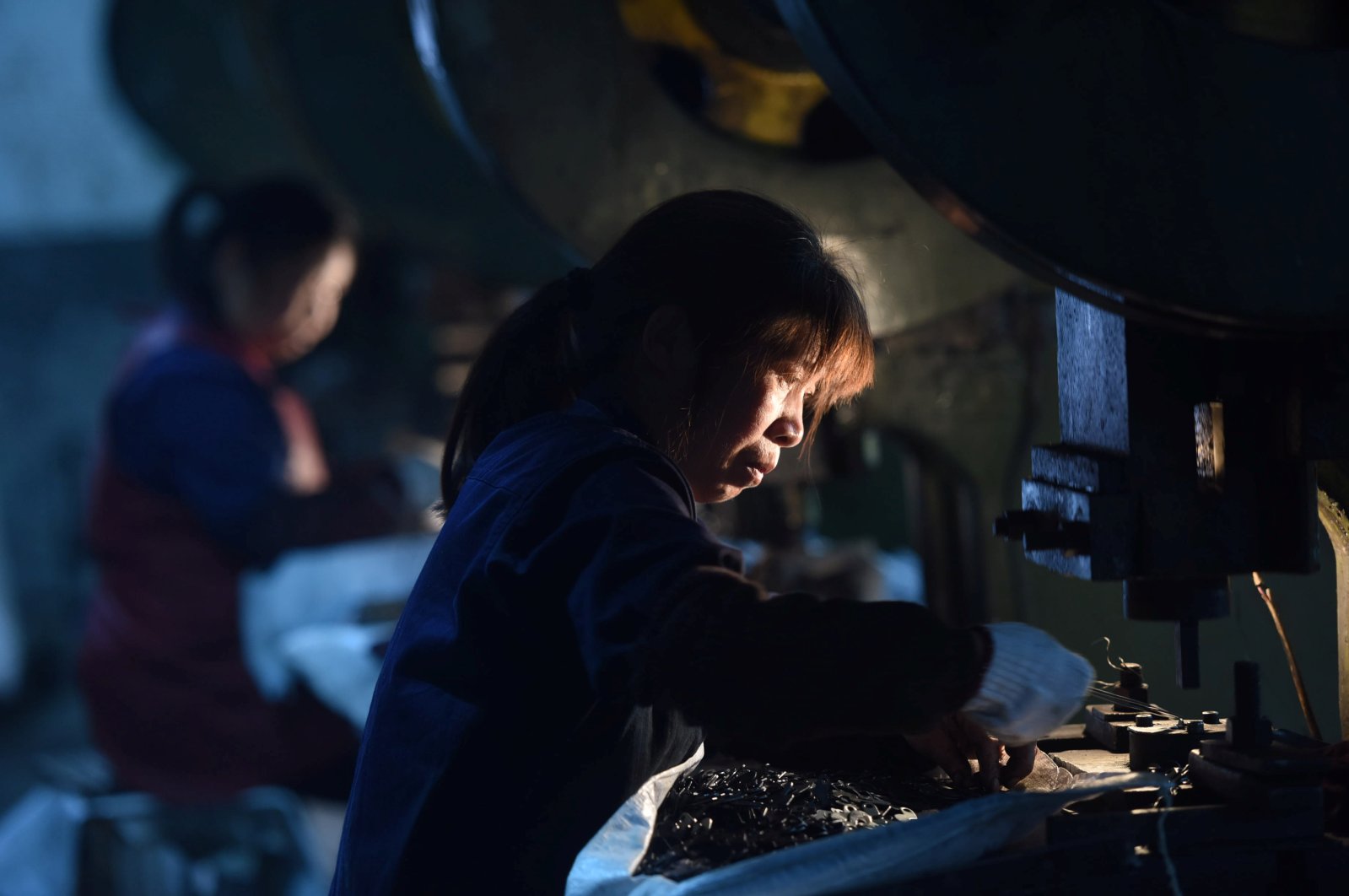 Employees work on a production line manufacturing metal parts for furniture at a factory in Hangzhou, Zhejiang province, China, April 30, 2020. (China Daily via REUTERS)
by REUTERS May 04, 2020 12:39 pm
RECOMMENDED

Factory activity was ravaged across the world in April, business surveys showed, and the outlook looked bleak as government lockdowns to contain the new coronavirus pandemic froze global production and slashed demand.

The coronavirus has infected more than 3.5 million people globally and killed around 247,000. With the public told to stay home in numerous countries, the global economy is expected to suffer its steepest contraction on record this year as supply chains have been massively disrupted.

In a bid to combat the impact of the lockdowns, central banks and governments have unleashed unprecedented levels of fiscal and monetary policy, suggesting that without these conditions could have been even worse.

Still, a series of Purchasing Managers' Indexes (PMIs) from IHS Markit across Europe and Asia fell deeper into contraction last month, with many diving to all-time lows and others hitting levels last not seen since the 2008-2009 global financial crisis.

A gauge from the U.S. published on Friday showed manufacturing activity plunged to an 11-year low in April as the coronavirus wreaked havoc, suggesting the world's largest economy was sinking deeper into recession.

On Monday, IHS Markit's final manufacturing PMI for the eurozone sank to 33.4, its lowest since the survey began in mid-1997 and far beneath the 50-point line dividing growth from contraction.

With shops closed and consumers concerned about their health and employment prospects, demand sank in the bloc to by far the lowest in the survey's history, giving scant hope for an imminent turnaround.

It was a similar story from Britain on Friday when its PMI showed manufacturers there suffered their biggest fall in output and orders for at least three decades.

"This past week saw the amazing coincidence of the publication of the deepest quarterly economic decline in the Western world in almost 100 years and the conclusion to the strongest monthly equity rally in more than 30 years," said Erik Nielsen, chief economist at UniCredit.

But European stock markets and oil prices fell on Monday as a spat between top U.S. officials and China over the origin of the coronavirus fuelled fears of a renewed trade war that might derail or delay a swift rebound.

"Economic data should remind investors of the bleak economic situation ahead even as governments from previous hotspots ready the gradual reopening of their economies."

Last week, China's official PMI showed factory activity still growing in April, albeit more slowly than March, while the private-sector Caixin PMI showed a dip into contraction, although at a much gentler pace than the rest of the world. Significantly, exporters in both surveys were jolted by steep falls in orders.

While China appears to be ahead of others in emerging from the economic paralysis inflicted by the pandemic, any recovery is expected to be gradual and unlikely to fire up an immediate resurgence in global demand.

The PMI for Taiwan, a major producer of high-end technology components, fell to 42.2, its lowest since 2009 and down from an expansionary 50.4 in March.

The declines in South Korea's and Taiwan's PMIs showed the contractions were less severe than those in other economies in the region, with indicators in Malaysia, Indonesia and Vietnam all reporting plunges to record lows.

Capital Economics said while South Korea and Taiwan held up better than their Southeast Asian counterparts, thanks mostly to effective government policies to contain the virus, conditions have nonetheless worsened.

South Korean tech giant Samsung Electronics Co. Ltd. last week said it expected profits to decline in the current quarter due to a slump in sales.

It said while work-from-home orders and growth in online learning would underpin demand for memory chips, the outlook for smartphones and TVs was bleak as consumers put off discretionary spending.

The production slump is of particular concern to policymakers, who are worried about the socially destabilizing effects of massive unemployment as firms in both factory and service sectors slash headcount.

A private-sector survey in Australia on Monday showed job advertisements plunging a record 53.1% in April, a decline almost five times larger than the previous record of 11.3% in January 2009.