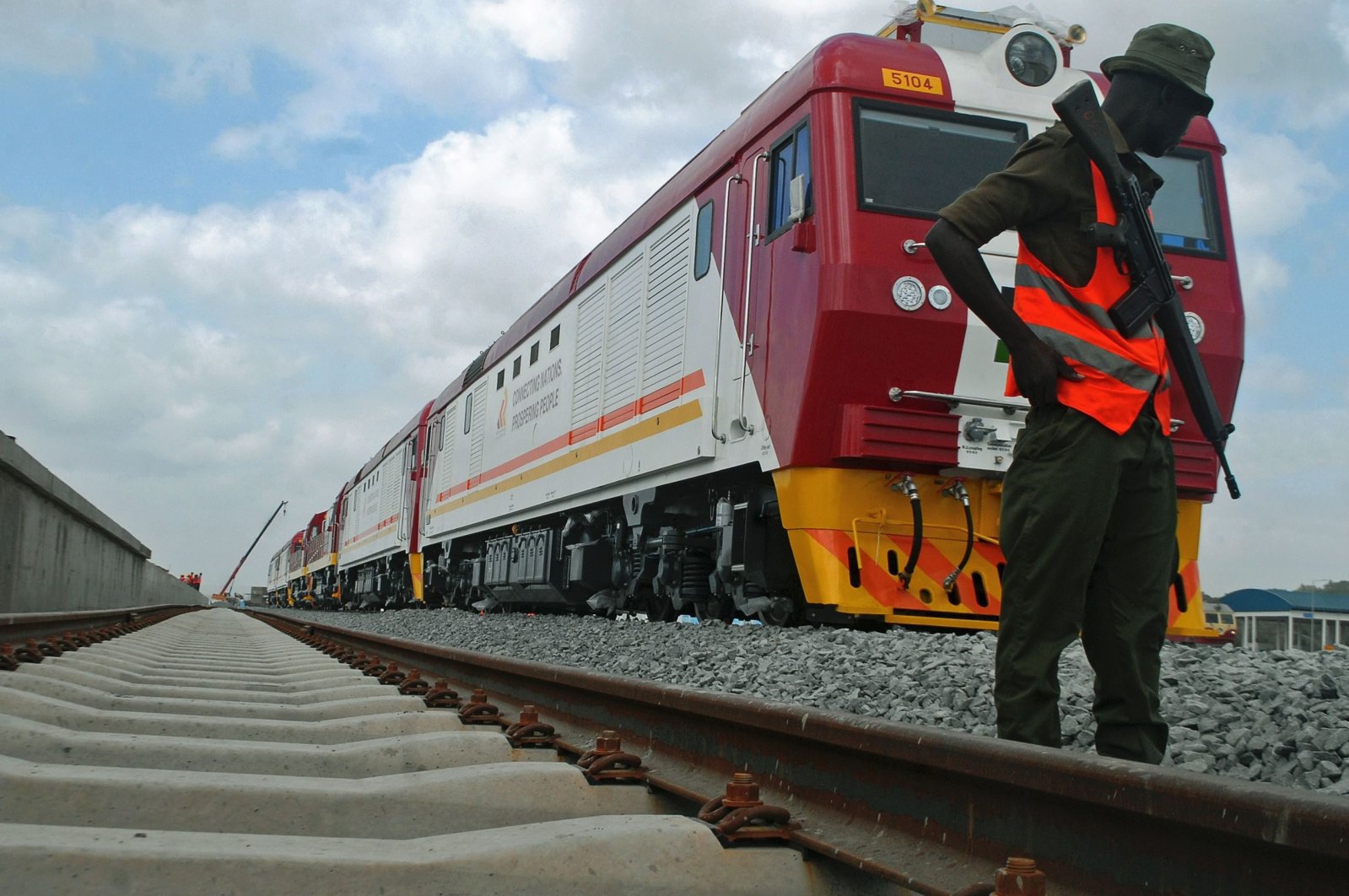 A security guard on patrol during the launch of the first batch of standard gauge railway freight locomotives at the port in Mombasa, Kenya, Jan. 11, 2017. (AFP Photo)
by Anadolu Agency Jul 08, 2021 10:21 am
RECOMMENDED

In their recently adopted annual financial outlays, Kenya, Uganda and Tanzania have also proposed to borrow at least $15.88 billion to fund ambitious projects such as ports, railways, roads and oil pipelines.

Comparing the budgets of East African countries, Fred Muhumuza, Uganda-based analyst and a lecturer of economics at Makerere University, told Anadolu Agency (AA) that all of them reflect growing deficits and debt implications.

The budget statements showed that the countries have retained the regional Common External Tariff (CET) rate of 25% and a duty rate of 10% for buses for rapid transport projects for one year. The governments have also retained application of the regional CET rate of 10% and apply a duty rate of 25% for one year on cotton yarns, and a similar deal for new pneumatic motorcycle rubber tires to protect local manufacturers. Among other measures to protect local industries, a duty rate of 35% has been imposed for one year on peanut butter to promote local small and medium enterprises (SMEs).

"There is pressure to raise taxes in the middle of slow growth due to COVID-19 and global dynamics that may see growth reduce due to unilateralism and tension between the West and the East," Muhumuza said.

Kenya decided to tap into the credit markets to finance the budget deficit which stands at 976.2 billion Kenyan shillings ($9.04 billion), equivalent to 7.5% of the gross domestic product (GDP). Tanzania is also increasing its borrowing up to $201.42 million, about half of which will come from external sources.

According to the International Monetary Fund (IMF) April outlook, the sub-Saharan region's economy is expected to resume expansion at the rate of 3.4% in 2021, weaker than the 6% outlook rate for the rest of the world.

Economists have warned that the rising COVID-19 infections in absence of requisite vaccine supplies will derail the economic rebound. "That has already happened and Uganda has suppressed the budget and we expect others to respond. Tax revenues will be very low and borrowing might increase and derail future trajectory," said Muhumuza.

Additionally, the countries have also proposed to continue with custom taxation measures which include retaining the application of the regional rate of 10% for one year on wires and alloy steel. A CET rate of 25% has also been imposed on milk cans, to provide some relief for the local dairy sub-sector. The import duty on iron and steel was retained at 25%, and for tomatoes, peas and potatoes at 30% for one year. The import of items such as leather, footwear and furniture has also been taxed heavily to protect local industries.

Kenya's public debt stands roughly at $78.5 billion and the government is seeking to borrow an additional $6.18 billion and $2.53 billion from the domestic market and foreign markets, respectively.

Tanzania has given priority to ongoing projects such as developing railway infrastructure and services, construction and rehabilitation of roads linking Tanzania with neighboring countries – with some $3.19 billion allocated on infrastructure.

Tanzania's national debt has reached about $1.2 billion as of April. Its external debt stood at $858.78 million while the domestic debt was at about $341.62 million.

"It is an effort to commend but not comprehensive enough given limitations of budgets, but also institutional failures and poor governance will make the situation a bit worse than it should be," he said.

Muhumuza underlined that all the countries in the region have little room to make choices since budgets are small and needs are plenty.

"The cost of debt repayment compared to revenues is quite high. In some cases, it is more than or about 20%. That comes at the cost of service delivery," he said.

He called for supporting households for livelihood survival and businesses among the interventions needed for the recovery process.