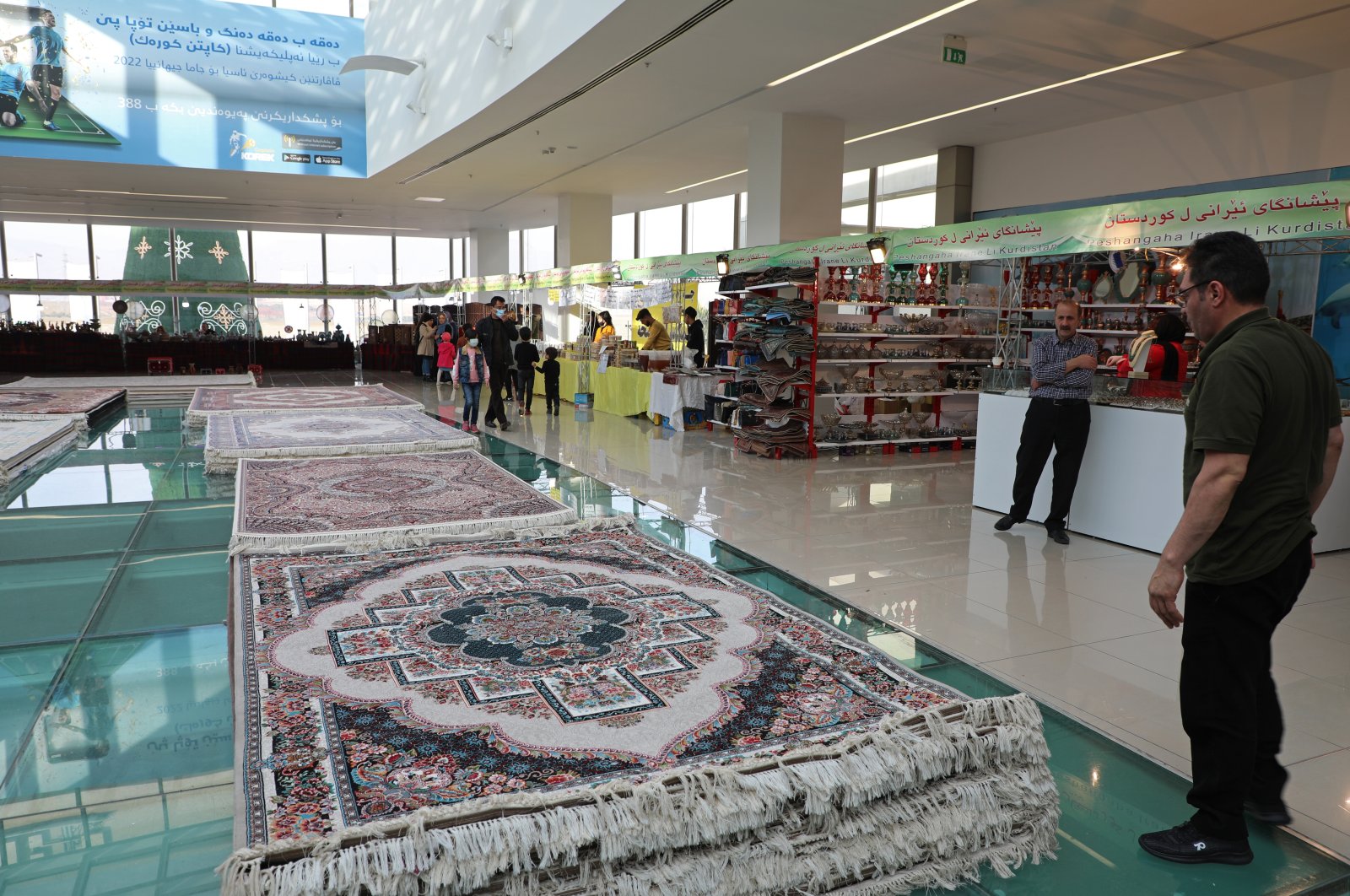 Piles of plush Iranian-made carpets line the floors of a shopping center in northern Iraq, hosting traders from neighboring Iran, in the city of Dohuk, in the Kurdish-run northern region of Iraq, Jan. 20, 2021. (AP Photo)
by ASSOCIATED PRESS Jan 21, 2021 1:00 pm
RECOMMENDED

Piles of plush carpets line the floors of a northern Iraq shopping center hosting traders from neighboring Iran who hope the spangle of their ornate handicrafts might offer a lifeline out of poverty.

In their own country, the economy is in tatters amid crippling United States sanctions.

“Our money is so devalued, so when we come to this side – apart from the cultural exchange that we share – from a financial perspective it’s more profitable for us,” said Iranian Ramiyar Parwiz, the organizer of the exhibition who is originally from Sanandaj. “The money we receive ... whether in dollars or dinars has a higher value on our side and it’s worth a lot."

At least 24 businesses from 15 Iranian cities set up shop this week in the city of Dohuk in the Kurdish-run northern region of Iraq. From Sanandaj to Bijar, they brought luxurious carpets and from Isfahan, Yazd and Hamadan, precious gems, copper and pottery.

Iran is among Iraq’s largest trading partners and this cooperation has deepened since 2018 amid the Trump administration's maximalist policy on Iran that has seen the U.S. pull out of Tehran’s 2015 nuclear deal with world powers and levy punishing sanctions on the country.

The dependence on Iraqi markets has only deepened as economic conditions worsen in Iran. U.S. sanctions bar American companies and foreign firms from dealing with Iran affecting Iran's energy, shipping and financial sectors, causing foreign investment to dry up.

Oil exports have been hardest hit and Iran’s economy contracted with dreary forecasts for the future. Unemployment rose and rural populations were disproportionately affected.

The exhibition of Iranian businesses is typically held every year in the city of Sulaymaniyah, which borders Iran. This is the first year the traders have ventured to Dohuk, which shares closer economic ties to neighboring Turkey, in hopes of enticing new customers and creating greater demand for Iranian goods.

Parwiz said the Dohuk venture was the result of desperation.

“There is huge pressure on people (in Iran), and the cost of living is unimaginably high,” he said. “We can’t afford to buy anything, we cannot even afford to buy medicine.”

Haji Tousi, a businessperson from Mashhad, sells his fine carpets at a lower price than local Iraqi traders. He knows the dollars he takes back home to Iran will keep him afloat.

But, to the dismay of many Iranian traders, the impact of Iraq’s own economic troubles was in plain sight: The exhibition attracts crowds of visitors but many can't afford the marked-down items.

“There are many visitors who have warmly welcomed this expo but economic problems have kept them from (purchasing),” said Maryam Mradi, a businessperson from Sanadaj.

Iraq is grappling with an unprecedented liquidity crisis brought on by low oil prices. That has slashed state coffers in half and led the government to borrow from the central bank’s foreign currency reserves to make salary payments.

Some of the Iranian vendors were skeptical their goods would be well received in Dohuk and other areas of Iraq, where Turkish brands dominate shopping isles.