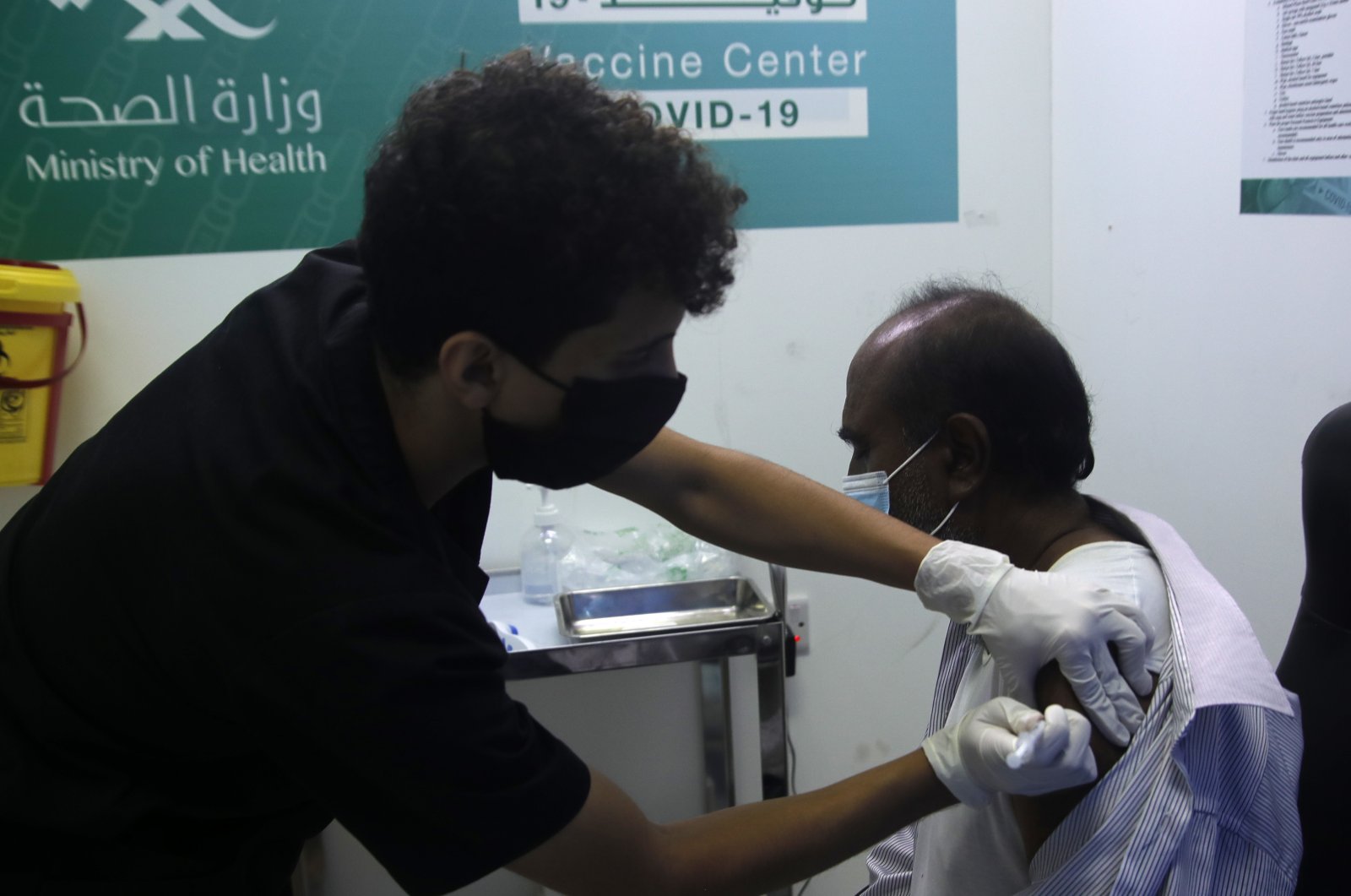 A Saudi physician administers a Pfizer coronavirus vaccine to a man at a vaccination center in the old Jeddah airport, Saudi Arabia, May 18, 2021. (AP Photo)
by French Press Agency - AFP May 24, 2021 1:21 pm
RECOMMENDED

In a contentious effort to boost inoculations, Saudi Arabia has started barring the unvaccinated from pilgrimages and overseas travel as well as blocking their access to universities, malls and offices.

So-called anti-vaxxers threaten to jeopardize global efforts to beat the coronavirus pandemic, health experts say, but Gulf autocracies, including Saudi Arabia, are cranking up the pressure on those refusing to get vaccinated.

Riyadh is accelerating a nationwide vaccination drive as it moves to revive tourism and host sports and entertainment extravaganzas, all pandemic-hit sectors that are a bedrock of the "Vision 2030" program to diversify the oil-reliant economy.

Sparking rumblings of discontent, the kingdom has allowed only vaccinated pilgrims or those who have recovered from COVID-19 within the previous six months to perform the year-round Umrah pilgrimage.

A similar move is expected for the upcoming annual hajj, a key rite of passage for Muslims, sources close to the government say.

This month, only vaccinated or immunized citizens were allowed to travel abroad after the kingdom lifted a ban on overseas trips introduced last year at the start of the pandemic.

Further riling public sentiment, the kingdom has said that from Aug. 1, vaccinations will be mandatory to enter government and private establishments, including educational institutions and entertainment venues, as well as to use public transport.

The sweeping announcement came just days after authorities said only vaccinated public and private sector workers would be allowed to return to the workplace.

The decisions have sparked pushback on social media from vaccine skeptics, with hashtags such as "No to compulsory vaccination" and "My body, my choice" gaining traction.

"You won't be able to do any of the following," wrote one Twitter user.

The measures in the absolute monarchy stand in contrast to incentives offered by liberal democracies like the United States, where cash prizes, baseball tickets and even free beer are being offered to boost vaccinations.

"A monarchy like Saudi Arabia can enforce such principles and this is likely to be effective in urging some who did not want to get vaccinated," Monica Gandhi, a professor of medicine at the University of California, told Agence France-Presse (AFP).

"However, it can be perceived as coercive."

The neighboring emirate of Dubai, one of seven that make up the United Arab Emirates, said this month that only vaccinated people would be allowed to attend sports events and concerts.

Bahrain has announced plans to temporarily restrict entry to malls, restaurants, cinemas and salons to those who have been immunized.

In Qatar, Kuwait and the UAE, which has reported the highest number of infections in the Gulf, citizens have launched social media campaigns against mandatory vaccinations.

But Saudi Arabia, the biggest Arab economy, appears bent on pressing ahead in tandem with efforts to reintroduce high-profile events that help soften its ultra-conservative image.

Saudi Arabia could offer a record fee of over $150 million to stage a boxing clash between Tyson Fury and Anthony Joshua this year, ESPN reported in April.

The kingdom is also set to host a Davos-style investment summit in October and its first-ever Formula One Grand Prix in December.

"Vaccinations are crucial for getting the Saudi economic engine running at full speed again," Robert Mogielnicki, a resident scholar at the Arab Gulf States Institute in Washington, told AFP.

"Higher vaccination rates will support key non-oil industries, such as tourism. Saudi officials want to ensure the show will go on with more concerts, cultural events and entertainment opportunities."

But the kingdom still has a long way to go, and it remains unclear how it will inoculate a bulk of its population before August.

Saudi Arabia's health ministry says it has administered more than 12 million coronavirus vaccine doses, in a country with a population of over 34 million.

Amid apparent supply shortages, the kingdom has delayed the second dose for many residents despite an uptick in infections.

Still, it is unlikely to tolerate vaccine hesitancy, which like other parts of the world is driven by misinformation as well as concerns over long-term side effects of vaccines developed in record time.

"Regarding anti-vaxxers in the kingdom, there is not much room for personal choices that clash with Saudi Vision 2030," said Mogielnicki.