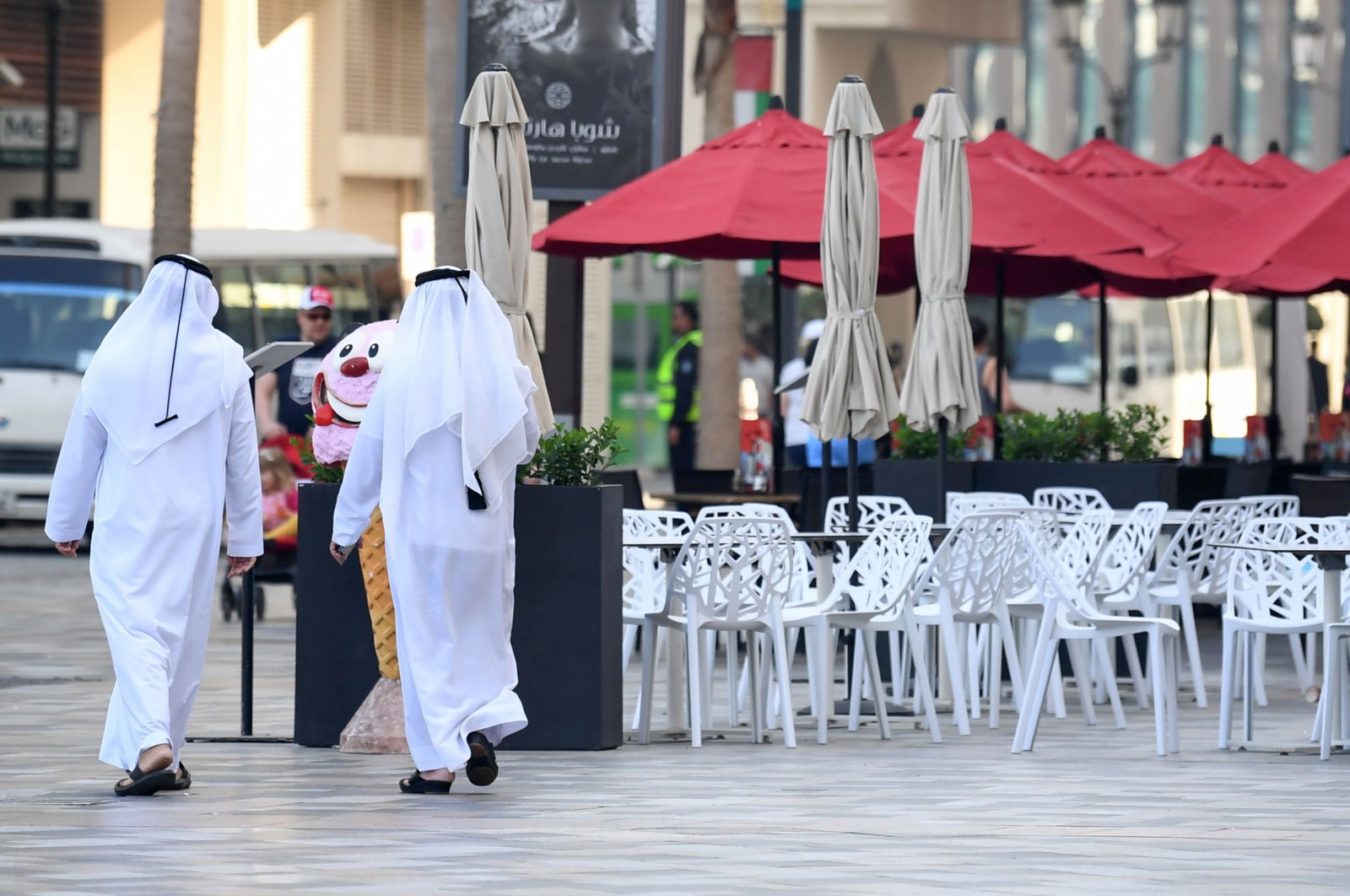 Emirati men walk along the empty beachside boulevard of Jumeirah Beach Residence which is usually crowded, in the Gulf emirate of Dubai on March 12, 2020. (AFP Photo)
by Compiled from Wire Services Mar 14, 2020 9:45 pm
RECOMMENDED

The central banks of Saudi Arabia and the United Arab Emirates (UAE) announced economic packages worth multi-billion dollars Saturday to contain the impact of the coronavirus outbreak.

The funding from the Saudi Arabian Monetary Authority (SAMA) is aimed at granting SMEs six-month deferrals on bank payments, concessional financing and exemptions from the costs of a loan guarantee program.

Meanwhile, the CBUAE (Central Bank of UAE) said it has rolled out a 100 billion dirhams ($27 billion) package to support banks and businesses in the country, where the outbreak is impacting vital economic sectors such as tourism and transportation.

"The CBUAE is allowing banks to free-up their regulatory capital buffers to boost lending capacity and support the UAE economy," it said in a statement.

The move comes after Dubai on Thursday announced a 1.5 billion dirhams stimulus package aimed at supporting the retail, trade, tourism and energy sectors.

Concerts, sporting events and industry conferences have been canceled or postponed in the past few weeks in the UAE to contain the spreading of the new coronavirus.

In Dubai – the Middle East's trade, finance, tourism and transportation hub – some businesses have started to feel the pain from the global travel slowdown caused by the outbreak.

The central bank said the scheme aimed to offer banks relief for up to six months from the payments of principal and interest on outstanding loans for affected private sector companies and retail customers.

Other measures introduced by the regulator include reducing by 15-25% the amount capital banks have to hold for their loans to small and medium enterprises and better terms for first-time home buyers, who will be required to put up less of their own capital for real estate purchases.

Importantly for the local real estate sector – which has been struggling in Dubai for the past decade – banks will be allowed to increase their exposure to real estate loans.

"When the exposure reaches 20% of the banks' loan portfolio (measured by risk-weighted assets), banks will be allowed to increase it to 30%, but will be required to hold more capital," it said.

The Dubai and Abu Dhabi indices dropped last week amid coronavirus concerns and because of an oil price war between Saudi Arabia and Russia, which sent oil prices tumbling.

To contain volatility in the markets, the central bank said it plans to issue guidelines on margin calls, asking banks to always request additional collateral before liquidating pledged stocks in case of a market downfall.

It also reiterated its commitment to maintaining the peg of the dirham to the U.S. dollar and said foreign currency reserves amounting to 405 billion dirhams as of March 10 were "adequate" to safeguard the stability of the currency.

The dirham last week dropped in the forwards market.