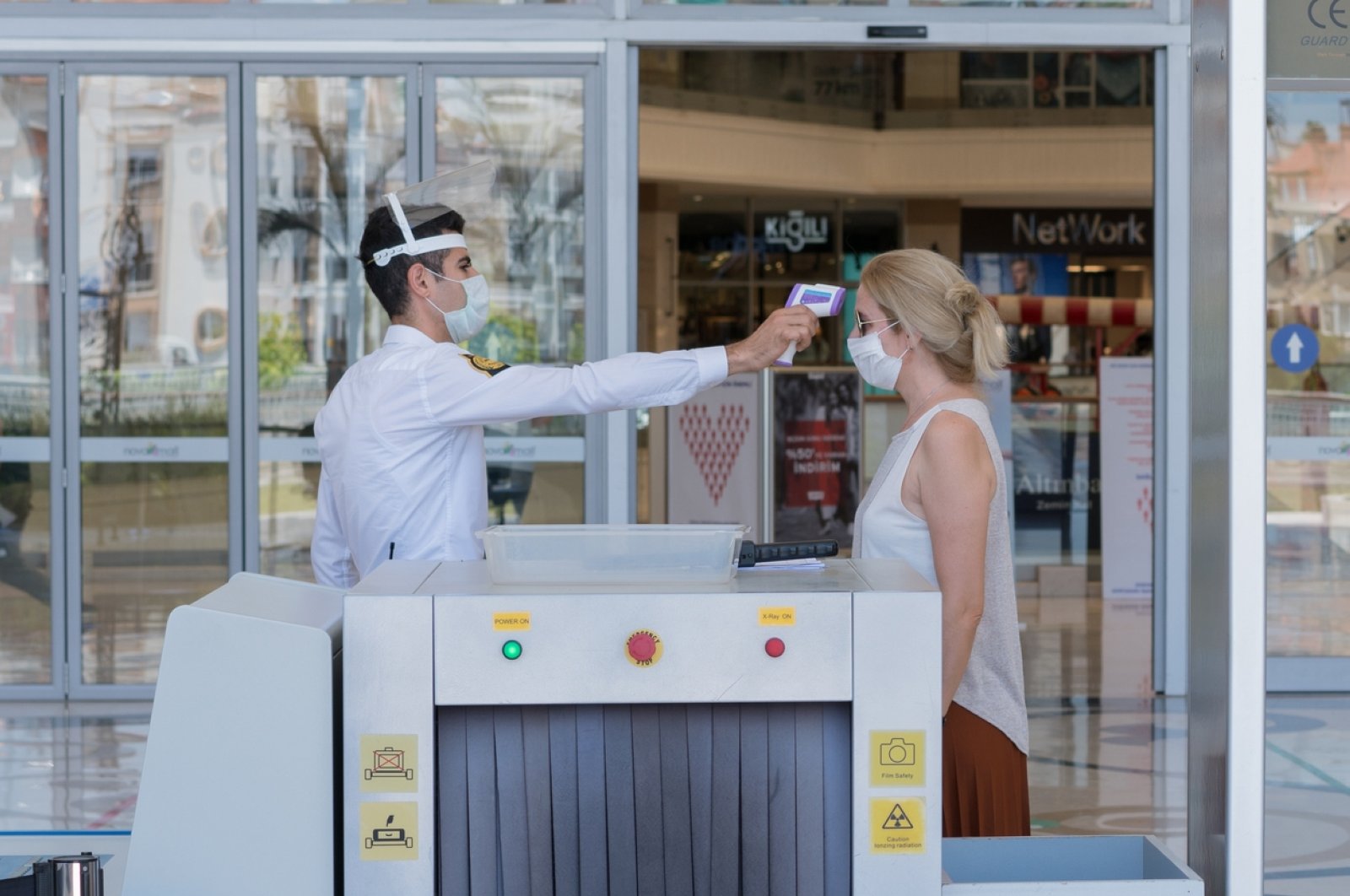 A shopping mall worker checks the temperature of a customer as a precaution against the coronavirus pandemic, Antalya, southern Turkey, June 8, 2020. (iStock Photo by Mustafa Gül)
by Pınar Çelik Sep 02, 2020 12:57 pm
RECOMMENDED

As malls in Turkey gradually reopened their doors to customers as part of the ongoing normalization process, stores have begun to catch up with their usual revenues.

Meanwhile, grocery or supermarket sales, which initially skyrocketed amid the panic-buying during the coronavirus pandemic, have since started to return to normal levels.

Shopping mall owners expect to regain last year’s turnover by the end of the year. Stores have already mainly achieved 75% of last year's turnover, with some stores even reaching 90%.

Murat Izci, the founding partner of shopping mall management and leasing company, KDM, said the remaining 25% loss was due to a lack of tourists. However, Izcı noted that as the tourism sector had seen some positive developments, they forecast achieving last year's turnovers by the end of the year – provided improvements in the tourism sector maintain their current course.

Izci added that investment plans regarding new shopping malls hadn’t changed despite the pandemic and by the end of this year, 11 more shopping malls will open across Turkey, including in Istanbul, the central province of Konya, northwestern Kocaeli, the Black Sea province of Ordu and the capital Ankara, as well as the provinces of Bayburt, Şırnak, Adana and Ağrı.

Explaining that shopping rates per capita had tripled during the pandemic despite a decrease in shoppers, Izci said fears of a second wave still affected customer behavior, however, he noted that shopping malls were more hygienic than most places, with precautions in place at the highest level. "There have been serious investments regarding ventilation systems," he added.

Meanwhile, businesses are also returning to normal in terms of food retail.

Although sales more than doubled for grocery stores during the pandemic, Turkey Retailers Federation Chairman Ömer Düzgün said since the normalization process began in August, sales now were parallel to those of 2019.

"In March, April and May, sales increased over 50% compared to the previous year," he said, noting that the sector had started June with an increase, too. Meanwhile, July sales came to less than the first two weeks of the previous month.

Sales again increased by 30% year-on-year during the four-day Qurban Bayram, or Eid al-Adha.

Düzgün said with the opening of the holiday season, sales fell in metropolitan areas, while an increase was observed in holiday resorts and districts and villages across the country as people left big cities to visit their hometowns.

"The increase came mostly in vegetables, fruits and charcuterie products," he added.

On the furniture side of retail businesses, sales have been on the rise and are tending to maintain their current trajectory, according to sector representatives.

Koray Çalışkan, chairman of the Modoko, a key player in Turkey's $20-billion furniture market said an above-normal sales chart has been formed in June and July and Modoko broke a record by hosting the highest numbers of customers in the last 10 years.

He explained that the biggest factors in this increase came due to the discounts offered by the firms (some as much as 50%), the resumption of the wedding season and various campaigns to speed up housing sales.

"We have seen an increase of around 20% compared to the previous year," he said.

Çalışkan said they aimed to complete the year with an increase in the current rate while setting a $4 billion goal for exports.

The sector has already close to $3 billion with foreign sales made during the first seven months, he added.