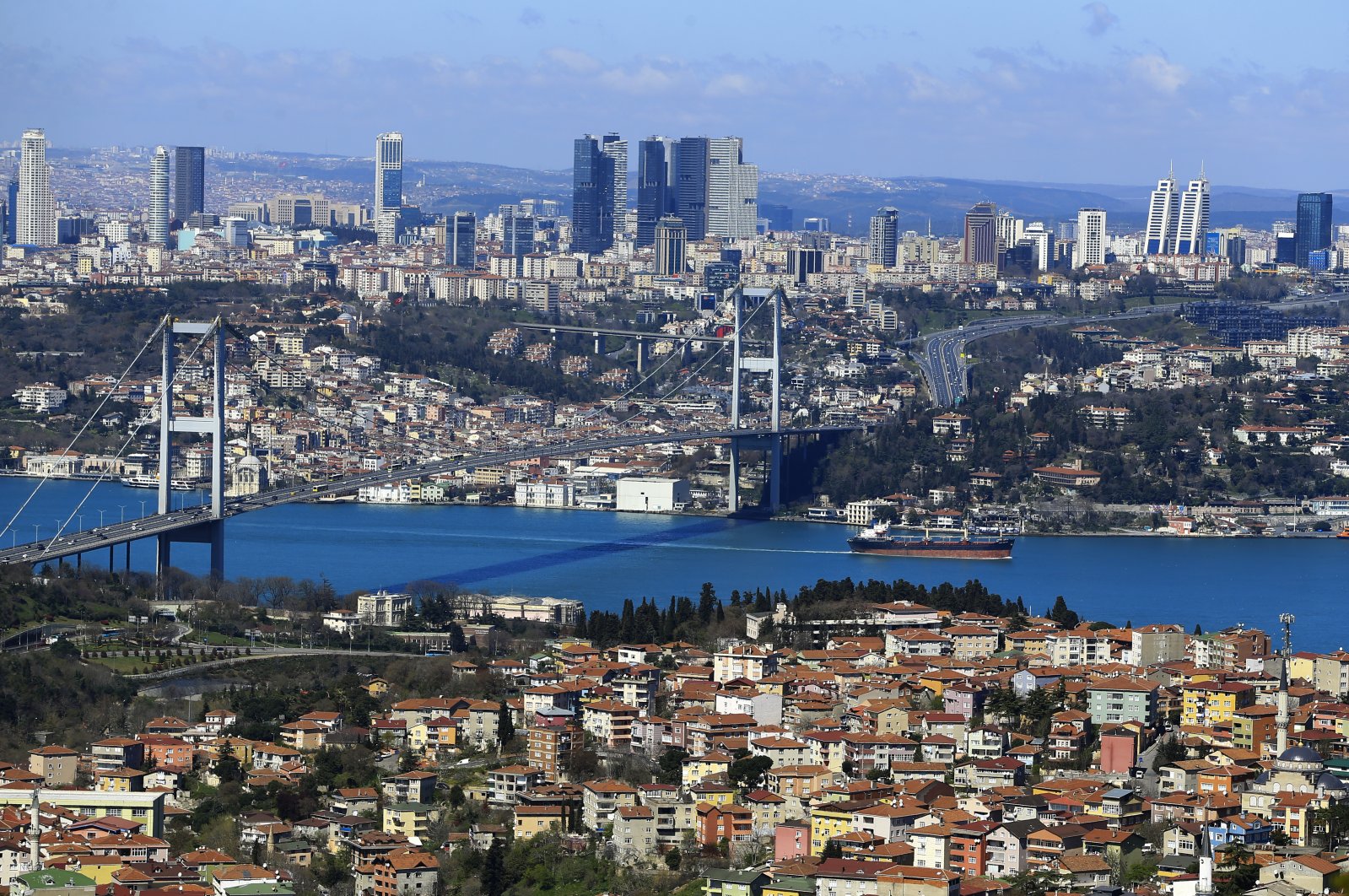 A commercial vessel sails through the Bosporus during the outbreak of the coronavirus, Istanbul, April 9, 2020. (AA Photo)
by Daily Sabah with Agencies Apr 12, 2020 1:32 pm

Aiming to protect markets amid panic from citizens and business over rising pandemic, Turkey has announced it will support salary payments, postpone loans and provide flexibility for taxpayers

Often cited as a model country in its response to the coronavirus pandemic, Turkey has charted its own course to navigate the outbreak in all areas, including the economy.

The country last month introduced a TL 100 billion ($14.93 billion) stimulus package – the Economic Stability Shield – to safeguard individuals and firms against the economic fallout of the pandemic. The country announced it would support salary payments, postpone loans and provide flexibility for taxpayers to protect markets amid the uncertainty caused by the outbreak.

Providing free health care services to all, Turkey is also distributing free face masks to residents between the ages of 20 and 65 and mobilizing its security forces to help the elderly with their shopping and other immediate needs.

Turkey was one of the first to take measures against the coronavirus by closing its border with Iran and halting flights from China and Italy. It has since shut down all international arrivals, restricted domestic flights and set up road checkpoints outside cities to prevent unessential travel.

Authorities have closed schools, cafes, nightclubs and barber shops, and canceled sporting events and prayers at mosques. The government has banned anyone 65 or older – the most vulnerable to the disease – from leaving home and later extended the ban to people under 20 after many falsely believed they were safe from the virus and continued to socialize.

At least 156 towns or villages have been placed under quarantine, with residents unable to leave their homes. Face masks are now compulsory in public places such as supermarkets.

Confirmed infections in Turkey have increased to over 52,000 with more than 1,100 deaths as of Saturday, according to the Health Ministry. Worldwide, at least 1.7 million people have been infected, over 109,000 have died and over 404,000 have recovered from the virus, according to Johns Hopkins University.

On Friday authorities imposed a surprise two-day curfew in 31 cities to reduce mobility over the weekend.

President Recep Tayyip Erdoğan has repeatedly called on citizens to observe their “own state of emergency” by staying at home voluntarily but has also said the country would consider tighter measures if those in place fail to curb the contagion.

“Our most important sensibility is the continuation of the supply of basic needs and ensuring the uninterrupted continuation of production to support exports,” Erdoğan said last week. “Turkey is a country in which in all conditions and circumstances must maintain production and ensure that the wheels (of production) carry on turning.”

Can Selçuki, head of the Istanbul Economics Research think-tank, said the government strategy of gradually limiting mobility aims “to stop the economy from coming to a full stop for as long as possible.”

“But if the curve doesn’t flatten and the numbers keep rising, then (a total lockdown) is definitely in the books,” he told The Associated Press (AP).

The country announced it will continue to provide TL 75 per month for around 7.8 million minimum wage earners for 12 months. Both the public and private sectors have taken measures for working remotely or with flexible hours in an effort to keep more people in their houses.

The government also announced that for three months, it would pay 60% of the salary of those at firms forced out of business due to a force majeure, such as the pandemic. With this short-term employment allowance, the government said it would also make direct transfers – within the range of TL 1,752 to TL 4,381 – to employees' bank accounts.

Treasury and Finance Minister Berat Albayrak Sunday said over 200,000 firms and over 2 million workers had applied for short-term employment allowance, adding that 700,000 of these had been approved.

In a video posted on his Twitter account, Albayrak said the country would provide a monthly stipend of TL 1,170 for three months to citizens forced to take unpaid leave or not benefitting from a short-term employment allowance.

He also said 290,000 tradesmen had applied for TL 25,000 in support financing, noting that the processing of 163,450 applications had been completed and that nearly TL 4.1 billion's worth of financing had been allocated.

“More than 4.2 million citizens have applied for the individual support package. Over TL 1.5 billion has been allocated to over 250,000 of our citizens,” Albayrak said.

To help shield retirees from the outbreak's negative effects, the minimum pension was raised to TL 1,500, with bonus payments moved to earlier dates. Upon request, public banks will also deliver payments to pensioners' homes.

Further, the government has started providing 4.4 million families in need with TL 1,000 as part of the first and second stages of a social aid program, while preparations are underway for the third stage.

In the private sector, employees are now allowed to benefit from compensation work for a total of four months, instead of two, during which they will be able to go on paid leave and repay their hours with extra work later.

For health care personnel, performance payments will be paid for a maximum of three months as the country employs 32,000 additional staff at its medical facilities.

Tax and other payments

The government announced that over 2 million taxpayers' value-added tax (VAT) and premium payments – totaling some TL 53.6 billion – were postponed for six months.

Also postponed were the income taxes of 1.9 million who faced a force majeure, as well as the payments and declarations of taxpayers aged 65 and above.

Accommodations taxes, previously scheduled for this summer, were also delayed until January 2021. Easement and revenue share payments for renting hotel rooms were deferred for six months.

Separately, cuts in municipality budgets were postponed for three months, allowing access to TL 3 billion in additional funding. The government has also provided flexibility for rental payments of properties owned by special provincial administrations, municipalities and their subsidiaries.

State lenders announced a low-interest credit package of up to TL 10,000 for families with monthly incomes under TL 5,000. Millions of citizens applied for this loan and payments will commence next week.

As of Friday, Albayrak said 66,171 companies had applied for "Support to Continue Working" financing backed by the Credit Guarantee Fund (KGF) on the condition that they retain employees.

“The process of 34,858 companies has been concluded and financing of TL 29.558 billion has been allocated. Our SMEs constitute 96% of the firms to whom the financing was allocated,” Albayrak noted.

In a measure to support exporters, banks will provide money for stocks in order to protect their capacity utilization rate.

Another measure to bolster liquidity doubled the limit of the Credit Guarantee Fund, while the maximum credit viability rate for house loans was raised from 80% to 90% to support the construction sector.

Companies failing to meet financial obligations in April, May and June, were included under force majeure conditions. The government-backed credit insurance limit was also raised from TL 25 million to TL 125 million.

Albayrak said the government would help every citizen, firm or factory that needed support.