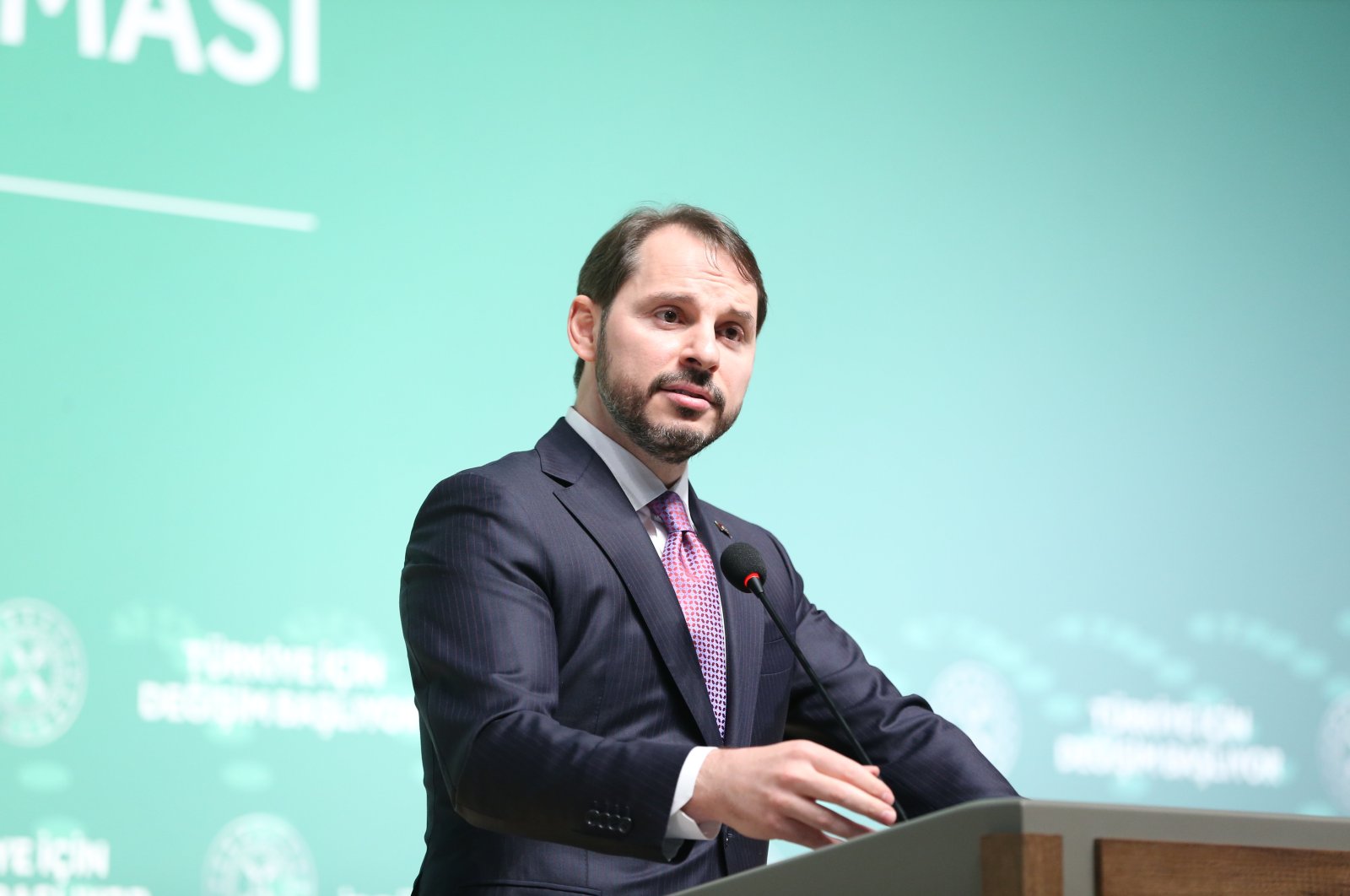 The stimulus package announced to blunt the effects of the coronavirus will provide up to TL 60 billion of liquidity to the market in next three months, relieving the most affected industries, said Finance Minister Albayrak

The multibillion Turkish lira stimulus package Turkey announced to counter the effects of the coronavirus outbreak on economy and businesses will provide liquidity relief for industries most affected by the pandemic, the treasury and finance minister said Thursday.

Berat Albayrak’s remarks came after President Recep Tayyip Erdoğan on Wednesday announced the country would postpone debt payments and reduce tax burdens in various sectors under a TL 100 billion ($15.4 billion) package to support the economy and lessen the impact of the coronavirus pandemic.

“The relief package will provide TL 50 billion to TL 60 billion of liquidity to the market in the next three months,” Albayrak said in a televised interview with Anadolu Agency (AA), while also stating that the government would provide the necessary support to businesses as well as citizens.

Turkey announced its second death related to the coronavirus late Wednesday of a 61-year-old man and said that the number of confirmed cases had nearly doubled to 191 from 98 a day earlier, as it ramped up steps to combat the virus’s spread, closing cafes, banning mass prayers and halting flights to 20 countries.

Erdoğan advised citizens not to leave home unless necessary for three weeks and to minimize social contact until the threat of the coronavirus recedes.

The package Erdoğan announced includes measures for the postponement of tax duties, loans and social insurance payments, as well as several incentives for Turkish businesses and citizens.

The president also called on banks not to restrict loans and for companies not to cut jobs, while also vowing to support the national carrier, Turkish Airlines. Among specific measures, he said Turkey’s accommodation tax was being suspended until November to support the key tourism sector, which accounts for 12% of the economy.

Value-added tax for domestic aviation was cut to 1% from 18% and the limit of the treasury-backed credit guarantee fund – which guarantees loans to small- and medium-sized firms – would be doubled to TL 50 billion.

Albayrak also said he had no concerns about Turkey’s ability to meet its economic growth, budget and inflation targets for 2020 amid expectations of a potentially severe global recession due to the coronavirus.

“January and February went very well. There has been a slight decline in March, but we will end the first quarter with growth above expectations,” he said. “We don’t have concerns regarding our targets. We will achieve a 5% growth in 2020, and inflation will follow a downward trend due to recent global developments."

He noted that uncertainty about the global supply chain generated by the pandemic represented an opportunity for Turkey.

On the other hand, inflation was a pressing issue for the economy in the second half of 2019 when it surged to a 15-year high above 25%. But it has since dropped gradually throughout last year and ended at 11.84% in December.

In response to the hike, the Central Bank of the Republic of Turkey (CBRT) had raised its policy rate to 24%, where it stayed until last July 2019. It has since then significantly slashed rates to boost growth.

The consumer price inflation rose less than expected to 12.37% year-on-year in February. Month-on-month, consumer prices rose 0.35%, according to TurkStat.

As part of efforts to keep the economy on track, the CBRT cut its key interest rate by 100 basis points on Tuesday at an earlier-than-scheduled policy meeting and took steps to support the volatile financial markets amid the outbreak.

The bank cut its benchmark one-week repo rate to 9.75% from 10.75%. The Monetary Policy Committee (MPC) brought forward a meeting originally scheduled for March 19 to discuss the potential economic and financial impact of the coronavirus.

On the other hand, business representatives praised the stimulus package announced by Erdoğan.

Nail Olpak, chairman of the Foreign Economic Relations Board (DEİK), stated that the measures and supports announced after the meeting met almost all demands.

“The Economic Stability Shield package is handled with a holistic approach, aimed at supporting both supply and demand,” Olpak said. “Protecting employment as a prerequisite for benefiting from supports is also very important to us. What matters to all of us is first the human health and then the health of our businesses. We firmly believe that we will work through this difficult process with less damage. I believe this process is well managed with its health and economic aspects.”

Turkish Exporters’ Assembly (TİM) Chairman İsmail Gülle stated that very critical decisions were taken for Turkey and its exports, adding that they consider the package as an important move that will relieve the exporters in the coming period.

Under the package, the government looks to provide inventory financing support to exporters in order to maintain capacity utilization rates during the temporary slowdown in exports.

“We want to use every opportunity that we can to take on a role as a supplier on a regional and global scale with our position as a reliable port supplier to supply problems arising from countries where the virus has spread in international markets. In the upcoming period, we will continue to work intensively on the subject in line with the demands of our exporters, so that our exports are not affected by this negative picture in the world,” Gülle noted.

Maintaining their preparations for the season, the tourism representatives stressed that the package would relieve the industry.

Turkish Hoteliers Federation (TÜROB) Chairman Sururi Çorabatır stated that they had been working with Culture and Tourism Minister Mehmet Nuri Ersoy for a long time. He added that “21 items have been announced, many of which will positively affect the tourism industry. There are also items directly concerning the tourism industry.”

Çorabatır stated that it is important to postpone the loan payments to banks at the beginning of the season, which corresponds to April through May. Noting that the tourism-related part of the Credit Guarantee Fund (CGF) loan will support the sector, he pointed out the importance of continuing the minimum wage support and the introduction of short-time working allowance.

In a written statement, Feyzullah Yetgin, the chairman of Real Estate and Real Estate Investment Trusts Association (GYODER), evaluated the increase of the creditable amount in residences below TL 500,000 from 80% to 90%. “Reducing the minimum down payment to 10% will trigger an important segment that had to postpone the purchase of housing as they could not complete the down payment,” Yetgin stressed. “With support, the real estate sector will also grow stronger from this process.”

“The measures announced regarding uninterrupted cash flow and employment are satisfactory. These measures and supports are vital in terms of spinning the wheels of our industry and production,” Erdal Bahçıvan, chairman of the Istanbul Chamber of Industry (İSO), said. “A resource of TL 100 billion comes into play. We are at the beginning of the process. The sectors that will suffer the most in this challenging process have taken priority. I believe that other sectors will be included in the scope of support in accordance with the course of the developments, by going into the details of this support package in the coming days.”

Ankara Chamber of Commerce (ATO) Chairman Gürsel Baran, on the other hand, stated that the package would ensure the continuity of production, trade and employment without any damage. Baran further stressed the importance for the government to announce a package of measures soon, in consultation with the business community, so that the measures taken against the coronavirus prove to be effective.

Özgür Burak Akkol, the chairman of the Turkish Confederation of Employer Associations (TİSK), underlined the importance and necessity of the package in terms of the continuation of production and exports, the protection of employment and for businesses not to fall behind in international competition. “It is very important at this stage to explain the package before the effects of the coronavirus crisis deepen,” he added.