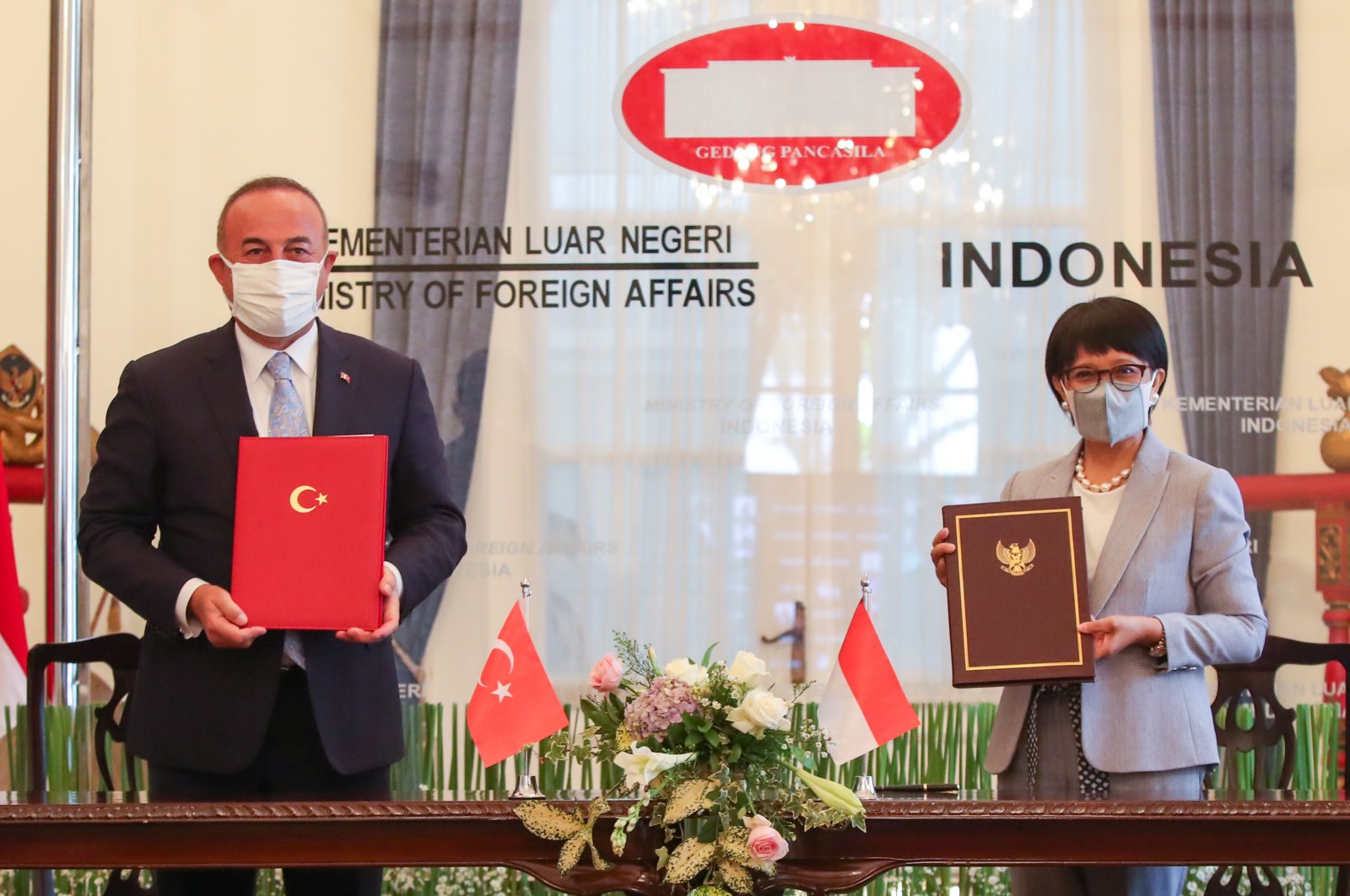 Turkey and Indonesia had agreed to increase their bilateral trade volume to $10 billion (TL 76 billion) from the current $1.5 billion and to boost investments in both nations, Turkish Foreign Minister Mevlüt Çavuşoğlu said Tuesday.

The minister was speaking at a press conference alongside Indonesian counterpart Retno Marsudi in Jakarta.

Çavuşoğlu and Marsudi also inked a memorandum of understanding (MoU) on diplomatic cooperation, as well as diplomat exchanges and training.

He noted that 2020 was the 70th year of the establishment of diplomatic ties between Ankara and Jakarta and the economic ties continue to strengthen, adding that Turkish President Recep Tayyip Erdoğan's Indonesia visit due to take place next year would initiate a High-Level Strategic Cooperation Council between the two countries.

The council would present a ground for businesspeople from both countries to discover business opportunities and fields of cooperation.

Sharing that the council summit was planned for 2020 but was canceled due to the COVID-19 pandemic, Çavuşoğlu expressed that he hopes that the summit turns into an important opportunity for the two countries to strengthen partnerships in a number of sectors.

The minister highlighted that the construction and infrastructure sectors in Turkey particularly have the best services to offer and that the local firms are very interested in the infrastructure projects to move Indonesia’s current capital to the Kalimantan region which is among the Southeast Asian country’s agenda.

Indonesian President Joko Widodo announced last year a $33 billion megaproject to move the nation's capital from Jakarta to the province of East Kalimantan. The move is not only due to the country’s search for a new city to replace the congested capital but also because its current capital continues to sink more every year, accelerating the country’s race against rising sea levels. Construction and infrastructure efforts are set to begin for the new capital in 2021.

Çavuşoğlu added that he and Marsudi also discussed the Public-Private Partnership (PPP) model, particularly in the construction sector.

Highlighting the fact that Turkey is becoming a global model in terms of PPP, Çavuşoğlu said the country is ready to share its experience with Indonesia.

"We have carried out so many major projects in Turkey through the PPP model, and Turkish construction companies are second in the world after Chinese firms," he said.

Stating that the defense industry is one of the sectors that can be strengthened between the two countries, Çavuşoğlu said: “Turkey offers three advantages which are quality, competitive prices and the lack of political obstacles.”

For her part, Marsudi said that the two sides agreed to continue negotiations for a free trade agreement (FTA) in 2021, as authorized by the leaders of both countries.

"The Turkey-Indonesia Comprehensive Economic Partnership Agreement (IT-CEPA) has the potential to increase bilateral trade between the two countries," she said.

Welcoming Turkish investors' rising interest in Indonesia, Marsudi said: "I told Minister Çavuşoğlu about the employment law that was recently approved in Indonesia and encourages foreign investment. I believe this will provide a more favorable environment for Turkish investments here."

On regional and global issues, Marsudi said that they discussed the importance of strengthening multilateralism in the fight against the coronavirus pandemic.

Emphasizing that peace and stability in the Middle East would be essential for a global recovery in the post-pandemic period, she said Indonesia and Turkey agreed to strengthen the Organization of Islamic Cooperation (OIC) to improve the welfare of Muslims.

Çavuşoğlu also said that the two countries should work together to support the Muslim community against anti-Muslim discrimination.

“We should support the (Muslim) community by working together with Indonesia and fight against these,” the minister said.

Çavuşoğlu highlighted the increased threats of Islamophobia and discrimination against the Muslim world and said the two countries should also stand together against attempts to harm their values.

"As two important Muslim countries we must protect the mutual aims and interests of our countries and the (Muslim) community," he said.