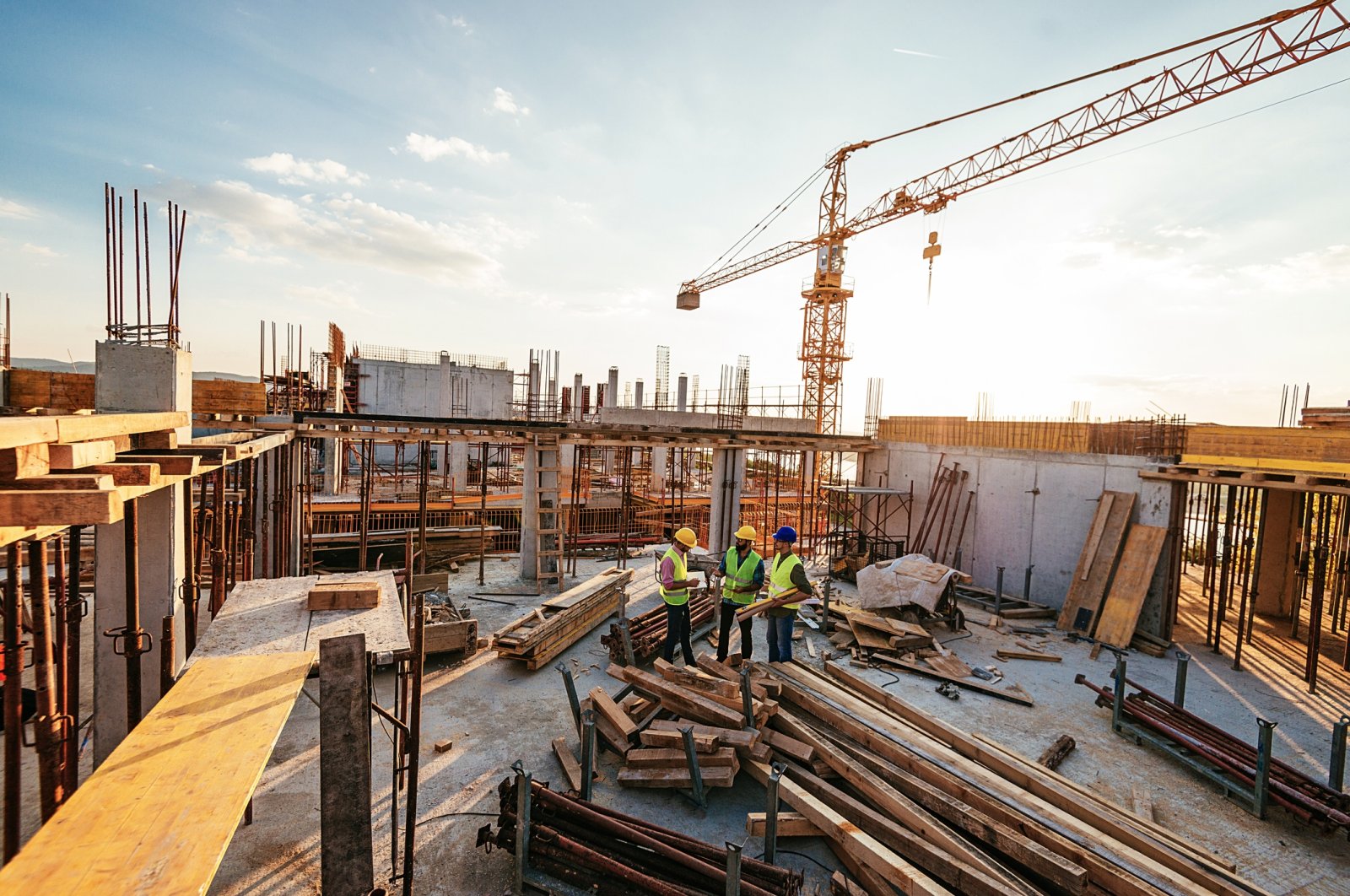 Turkish contracting companies, which have gained an important place in the foreign contracting market with more than 10,000 projects since 1972, have begun to receive invitations to do work in developed markets in Europe and the Americas.

“Our image in our region is pretty good. The work we finish by understanding and showing flexibility and the quality of our work opens new doors for us. For us, they say, ‘They do business at the European standards at the price of China.’ This perception is extremely useful to us,” Mithat Yenigün, chairman of the Turkish Contractors Union (TMB), told Turkish Sabah daily in an interview.

“A delegation from us also went to Canada and made examinations. They want to do these renovation projects with us. They asked us to do it together. When they visited us, they even said that they would grant us the right to immigrate 40,000 workers. A similar offer came from Indonesia,” he said.

“We are a serious brand in our region. While operating as an active player here, we have set our eyes on developed markets, and now we have reached the maturity to evaluate the opportunities there.”

He said Turkish companies are seeking projects in developed markets in Europe and the Americas, noting that some contractors have already undertaken works in the West.

“These projects are currently underway. We also have companies that do housing projects in the U.K. There is also a great need for infrastructure renewal both in Europe and in the United States. The U.S. will have $1.3 trillion in infrastructure renewal business volume over the next 10 years. Of course, we want to get our share of it. Canada is also a market on our radar. There is also an opportunity for $350 billion of infrastructure renovation over the next 10 years, and there have been good developments in this regard," Yenigün added.

$35B potential in Indonesia

Indonesian President Joko Widodo announced last year a megaproject to move the nation's capital from Jakarta to the province of East Kalimantan. The move is not only due to the country’s search for a new city to replace the congested metropolis but also because its current capital continues to sink more every year, accelerating the country’s race against rising sea levels. Construction and infrastructure efforts are set to begin for the new capital in 2021.

Within the scope of the project, Yenigün pointed to the potential of some $35 billion in infrastructure business volume.

“Recently, a webinar was organized with the participation of the Indonesian minister of public works and our Trade Minister Ruhsar Pekcan. There, the Indonesian side invited us to their country to carry out these infrastructure projects. This and many similar developments are happening,” he said.

Turkish contractors have a long history and weighty presence in the Middle East, Africa and particularly in Central Asian countries such as Russia, Turkmenistan and Kazakhstan. They have also overcome economically distressed periods by adopting and showing flexibility in various markets.

“Our president visits countries in the region and touts us very nicely. All of this, of course, gives us a great advantage in terms of new business opportunities,” Yenigün noted. “But we are at a time when trade relations are highly influenced by political developments, and Turkey is very active, especially in its region. For example, we expect our active policy in Libya to create new job opportunities for us. In some countries, our works have decreased compared to the past. Saudi Arabia, for example. But in terms of quality and completion of work, Turkey is inevitably the most preferred country in the region.”

Turkish contractors have no competitors except China if the financing factor is excluded, the TMB chairman said. “But we also see British, French and Italian companies in projects where the contractor itself has to provide financing.”

He further noted the Chinese companies’ presence in Africa, noting that Turkish companies have often been called on by many of the continent's leaders.

"Even some financing-strong nations want to enter Africa and other developing countries with us by making cooperation offers,” Yenigün noted. For instance, he mentioned Japan, which he said seeks to cooperate with Turkish contractors in Africa.

“Last year, we signed a cooperation protocol for the sub-Saharan African market with the Japan Contractors Association. Together with Japanese companies, we are evaluating business opportunities in Africa. They bring finance and technology, and using our entrepreneurship and knowledge in the field, we will do business together. In addition, we also receive cooperation offers from the British,” Yenigün explained.

Since the day they opened abroad in Libya in 1972, Turkish contractors have undertaken over 10,000 projects, worth more than $400 billion, in some 127 countries so far. The nation is second only to China in the number of companies on the Top 250 Global Contractors List for 2020, prepared by the Engineering News Record (ENR), an international construction industry magazine.

Forty-four Turkish contractor firms entered the list, which ranks companies based on contracting revenue from projects outside their home countries. Turkey has maintained its performance and ranked second since 2017.

As of August this year, the number of contractors’ overseas projects had reached 10,500, Yenigün noted, adding that the companies gained $409 billion in turnover. Of this, 20% came from Russia, followed by Turkmenistan and Kazakhstan.

Having reached $19 billion worth of projects in 2019, the contractors had wanted to hit $20 billion this year, but the coronavirus pandemic disrupted their target, said Yenigün.

“As of the end of August this year, we have made a turnover of $8 billion. We'll have $14 billion by the end of the year. It's hard to predict the year ahead. If the pandemic doesn't go in a completely different direction, we've set a target of $20 billion again,” the TMB chairman noted.

He further stressed a target of $50 billion within 10 years. “We, as Turkey, currently receive a 4.5%-5% share of the global market. If the market does not come to a much different point because of the pandemic, there is now an annual overseas contracting business volume of between $500 billion and $550 billion. We anticipate that in 10 years, this will rise to $750 billion. Why? Because urbanization is increasing, infrastructure renovation needs are increasing. Therefore, we aim to increase our market share to 7% and achieve an annual business volume of $50 billion.”

On the other hand, Turkey and Libya in mid-August signed a memorandum of understanding (MoU) to boost trade and economic ties. The deal is said to lay the groundwork for resolving ongoing issues between Turkish firms and Libyan employers, opening paths to new investments and new projects.

Yenigün said the agreement was a document in the form of a guide, defining the path to be followed in cases of dispute.

“With the entry into force of this document, which was also signed by the Cabinet of Ministers of the Libyan Government, our creditor firms will sit at the table with the institutions they are dealing with one by one. They will discuss how payments will be made and how the business will run from now on. I think we'll get some good news on these issues in the coming days. As Turkey, our receivables abroad are not at a level that will create serious problems. We run our business with flexibility. There is no magnitude that we can express as a problem in this regard,” he noted.

Turkish contractors have been operating in the North African for many years; however, there were some construction projects that were interrupted recently due to conflicts in the country.

On the other hand, the TMB chairman also pointed to new tech opportunities, noting that they are working with the Industry and Technology Ministry on a new project to use artificial intelligence in construction.

“There are examples in the world, and we, as Turkish contractors, want to develop 24-hour ‘robot’ construction workers. These robot workers, developed by us, are doing the rough construction work. Then our domestic workers, who produce quality labor, will do the trim works,” Yenigün noted.

Among other partners in the project are the Trade Ministry and the Foreign Economic Relations Board (DEIK).