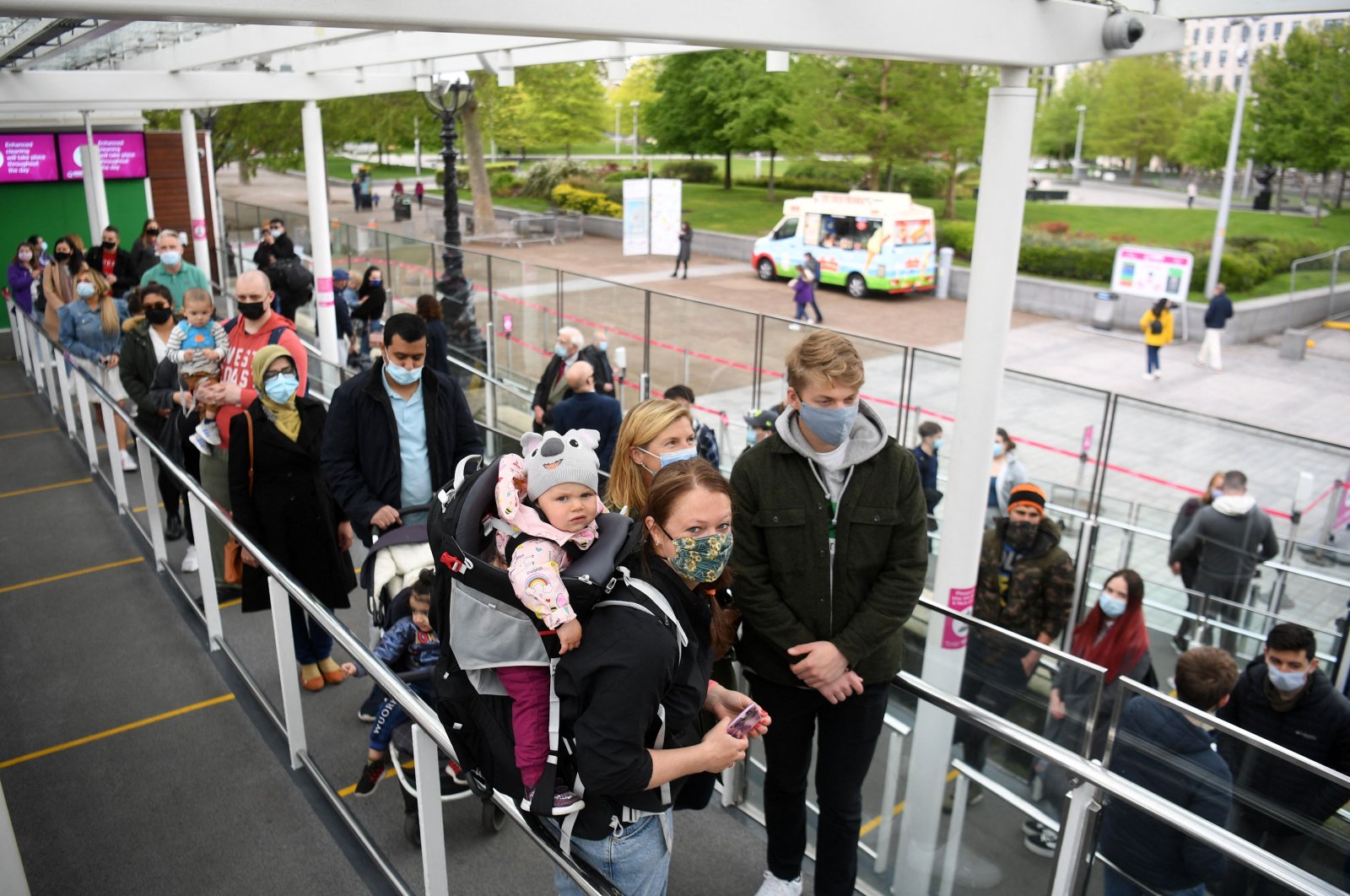 Customers wearing face coverings queue to board a pod on the re-opened London Eye tourist attraction in London as COVID-19 lockdown restrictions ease across the U.K., May 17, 2021. (AFP Photo)
by Agencies May 17, 2021 3:10 pm
RECOMMENDED

Britons streamed into restaurants, museums and other indoor venues on Monday as swathes of the economy reopened, giving 65 million people a measure of freedom after the gloom of a four-month COVID-19 lockdown, despite new fears over a more transmissible Indian variant.

The latest step in the gradual easing of nationwide restrictions imposed on Jan. 4 included the reopening of theaters, sports venues and museums, raising hopes that the economy may soon start to recover from the devastating effects of the pandemic.

The government also relaxed guidance on close personal contact, such as hugging, and permitting international travel, though only 12 countries and territories are on the list of “safe” destinations.

But the rapid spread of a variant, first discovered in India, is tempering the optimism for the businesses and hugs amid memories of how another variant swept across the country in December, triggering England’s third national lockdown.

Public health officials and the government urged people to continue to observe social distancing and hygiene guidance, even though they say the situation is different now because almost 70% of the adult population has received at least one dose of vaccine.

“Please, be cautious about the risks to your loved ones,’’ Prime Minister Boris Johnson said in a video posted on Twitter. “Remember that close contact such as hugging is a direct way of transmitting this disease, so you should think about the risks.”

Monday’s reopening allowed people to go out for a drink or a meal without shivering in outdoor gardens or huddling around sidewalk tables, as only outdoor service was permitted after the rules were initially eased last month.

The next phase in Britain's reopening is scheduled for June 21, when all of the remaining restrictions are set to be removed. Johnson has said a big surge in COVID-19 cases could scuttle those plans.

The threat looms particularly due to rising cases of the more transmissible new variant.

"We are keeping the spread of the variant first identified in India under close observation and taking swift action where infection rates are rising," Johnson said.

Both confirmed new cases and coronavirus-related deaths have risen over the past week, though they remain well below the peak reported in late December and early January.

New infections averaged about 2,300 per day over the past seven days compared with nearly 70,000 a day during the winter peak, according to government statistics. Deaths averaged just over 10 a day during the same period, down from a peak of 1,820 on Jan. 20.

More than 36.5 million people have had at least one dose of a COVID-19 vaccine and 20 million two doses, but ministers want a greater take-up to prevent further delays to the full reopening.

The British economy last year had its worst decline in three centuries while the government spent hundreds of billions of pounds to save jobs and companies, and the Bank of England (BoE) doubled its bond-buying program.

"Don't blow it, Britain," the Daily Mail said in a front-page headline.

Despite concern about the new variant, people ventured out. Some pubs opened at midnight, ready to scoop up any trade.

Ian Snowball, owner of the Showtime Bar in Huddersfield, northern England, said it was nice to be inside again, rather than facing the island nation's unpredictable weather.

“I don’t have to have a hoodie or a coat on anymore – it’s great,’’ he said. “And hopefully we don’t have to go back outside again, hopefully, this is the end of it now.”

Other Britons could not wait to leave altogether. Holidaymakers got up early to check-in for the first flights to green-list destinations such as Portugal.

Keith and Janice Tomsett, a retired couple in their 70s, were on their way to the Portuguese island of Madeira. They booked their holiday in October "on the offchance” it could go ahead. They had followed all the testing guidelines and were fully vaccinated.

“After 15 months of being locked up this is unbelievably good,'' Keith Tomsett told The Associated Press (AP). “It was even worth getting up at 3 o’clock this morning.”

"I’m American, my kids are American, my husband's British, we live in the U.K. so it’s really nice that we can travel again today," said Julie, 42, who was flying to Austin, Texas from Heathrow.

"My family haven’t met my youngest child so we’re happy to be allowed to travel," she told Reuters.

Most anticipated, though, was the removal of social distancing within private homes, allowing family members forced apart during the pandemic to hug again.

"I actually feel a wee bit emotional saying this ... you can hug your loved ones again," said Scotland's First Minister Nicola Sturgeon.

"I shall be hugging literally everyone I can get my hands on," British actress Joanna Lumley told The Telegraph newspaper. "I shall snatch babies from their mothers, and lean over zimmer frames.

"I shall hug girls at the till, the picture framer, and lads playing footie in the park. Much later obviously I shall be hugging police personnel as I am charged at the station. Hugger-mugger, that’s me."