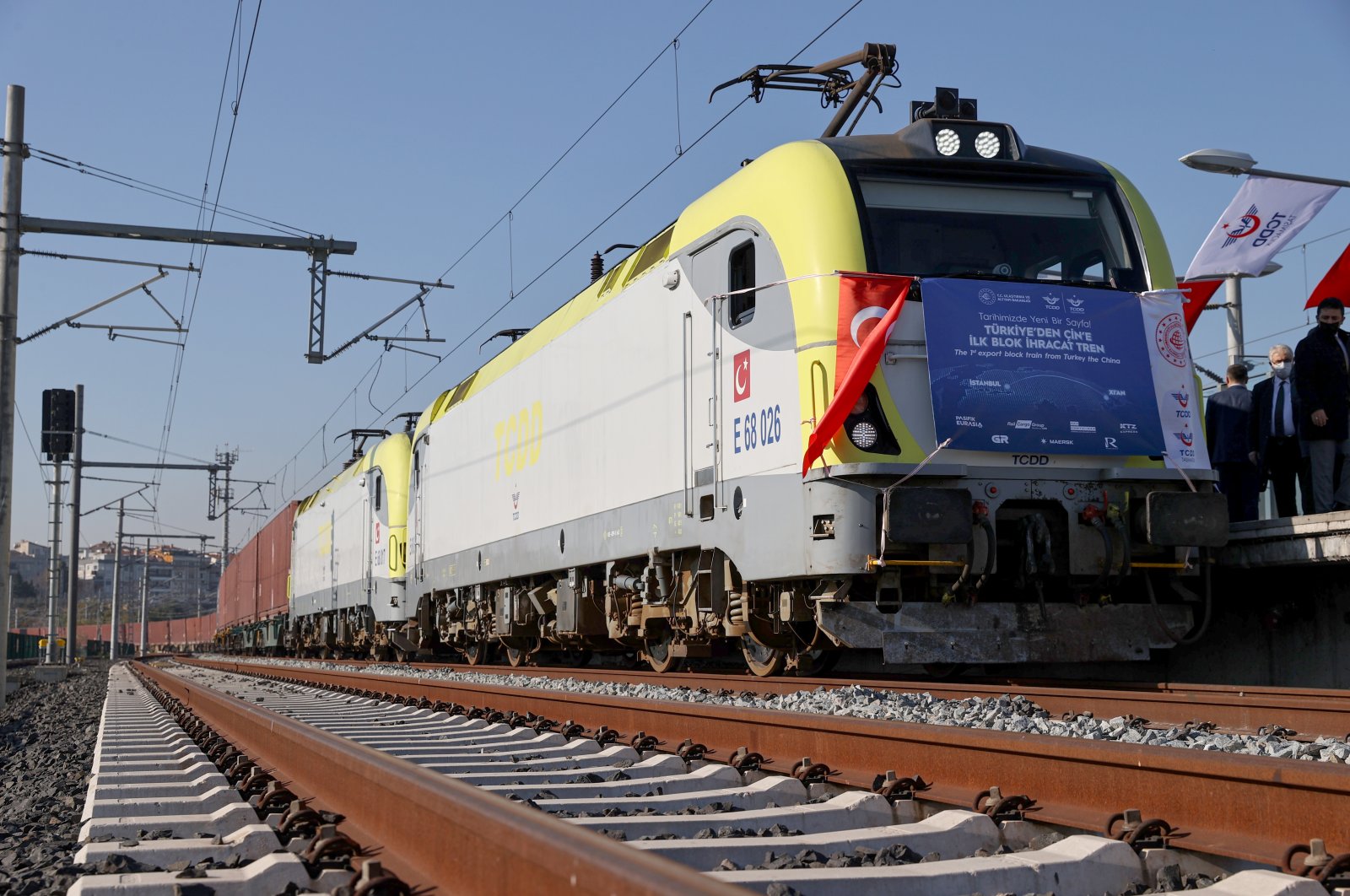 An export train, carrying goods from Turkey to China, is seen during a sendoff ceremony at the Kazlıçeşme station on the European side of Istanbul, Turkey, Dec. 4, 2020. (AA Photo)
by DAILY SABAH WITH AA Jan 18, 2021 3:03 pm
RECOMMENDED

“Therefore, it is time to say ‘Asia Anew,’” Ruhsar Pekcan said at a virtual meeting organized by Turkey’s Foreign Economic Relations Board (DEIK) on new perspectives toward enhancing trade volume between Turkey and Asian countries.

Pekcan called on Turkish businesses to see Asia and the Pacific region as an export market rather than the main source of imports.

“These countries (with which we post foreign trade deficit) should not be far for us to export to if they are not far for us to import from,” Pekcan said.

She said it was highly critical that businesspeople put forth more efforts in 2021 to enable the trade composition between Turkey and the region’s countries, where it experiences a trade deficit, to reach a balanced structure.

“It is time to see the geography of Asia and the Pacific, especially China and India, as our export markets,” Pekcan said.

“At a time when Europe is slowing down, we see no obstacle to making our exports sustainable by opening up new markets," she said.

Under the coordination of the Trade Ministry and the organization of DEIK, some 131 business events were organized with around 30 countries in the region, the minister said.

Noting that Asia has increasingly become the center for global production and trade, Pekcan stressed that the share of the Asia Pacific region rose from 26.3% in 2000 to 34.9% in 2019.

The Asia Pacific region’s share of global exports also climbed from 28% to 37% in the same period while one-third of global direct investments in 2019 was poured into this region, she said.

Turkey’s exports to Asia-Pacific countries dropped by 1.5% and imports were down 8.6% year-on-year in 2020, according to the data.

Highlighting that Turkey’s foreign trade with Asian countries is unbalanced, Pekcan said: “Their share in Turkey’s exports stood at 14.3% and in imports was 33.7% last year. We must definitely change this unsustainable trade structure.”

Olpak called this "a difficult but important goal."

Seven out of 17 target countries Turkey determined for 2020-2021 and nine of the 28 countries determined as primary have been chosen as focus countries from the region, according to Pekcan.

She expressed hopes that this would have a catalyst effect in terms of companies turning toward the region.

Turkish businesspeople’s investments in the region have reached $3.5 billion (TL 26.3 billion) as of 2019, while the inflow from the region’s countries has totaled about $17.5 billion, the minister said.

She also stressed that in order to increase the trade dialogue with the countries under the Belt and Road Initiative (BRI) and to revitalize the Middle Corridor, called the modern Silk Road, “we continue our work with the aim of making our country a bridge between Europe and China.”

She recalled the recent export train trips that were launched from Istanbul to China, dubbing them a significant step.

The first train carrying goods from Turkey to China departed on Nov. 4 and reached its destination on Dec. 19.

The train covered 8,693 kilometers (over 5,400 miles) as it passed through two continents, two seas and five countries. It traveled across Georgia, Azerbaijan, the Caspian Sea and Kazakhstan to reach Xi’an, the capital city of Shaanxi province in central China.

Two days after its arrival, a second train also departed for China. Turkish officials have said new trips are being planned.

In November 2019, Turkey and the world witnessed a historic moment after Ankara welcomed and sent off the first train that departed from China to Europe while passing under the Bosporus via Istanbul’s Marmaray tunnel, marking the realization of the “Silk Railway” dream.

‘21st century to be Asia’s century’

“The 19th and 20th centuries were the centuries of Europe and America, respectively. Today, all the data suggests that the 21st century will be the century of Asia,” Çavuşoğlu noted.

Many countries act with the awareness of this fact, the minister stressed, citing various deals signed recently between European countries, such as the U.K., and their Asian counterparts.

Noting that Turkey launched its Asia Anew initiative in 2019 to improve ties with Asian nations, he stressed that the initiative was especially significant in enhancing economic relations.

“We supported 33 Asian countries during the pandemic period and we brought medical supplies on vaccinations from countries like China and Japan,” he said, referring to continuing ties between Turkey and Asia during the coronavirus pandemic.