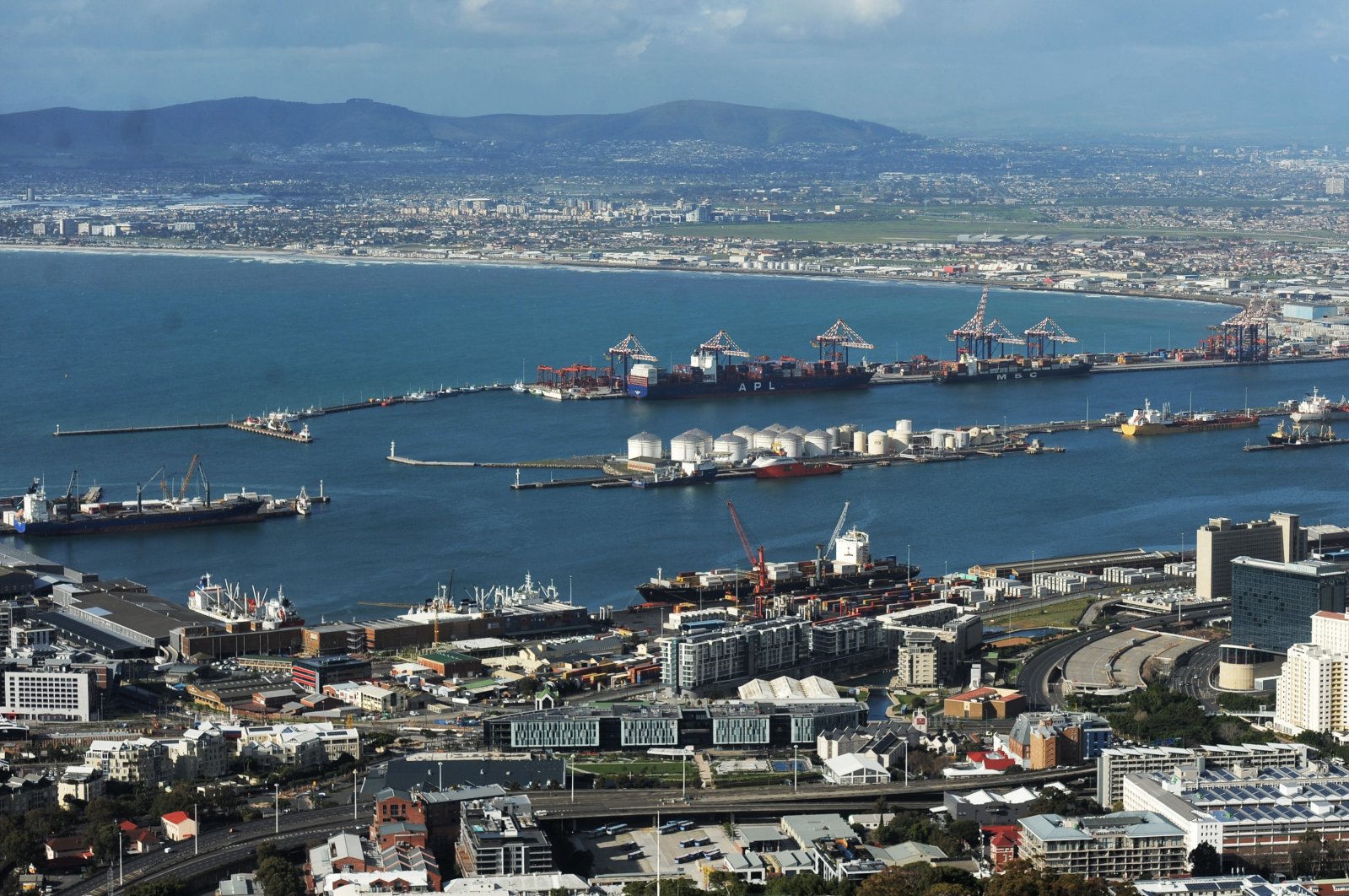 Lots of activities in and around the Port of Cape Town indicate that the import and export trade in picking up, in Cape Town, South Africa, Aug. 11, 2020. (Reuters Photo)
by Ayşe Betül Bal Oct 06, 2020 3:02 pm
RECOMMENDED

Africa is a trending continent due to its developing economy, natural resources and rapidly growing population and has been attracting investors from across the globe. Turkey’s bilateral relations with the continent have gained momentum in the last decade and entered into a more sustainable period as Ankara has been establishing high-level contacts.

Turkish and African businesspeople will meet at a virtual Turkey-Africa Economy and Business Forum on Thursday and Friday, laying new ground to strengthen existing relations while providing new opportunities, amid the critical period of the COVID-19 pandemic.

Officials in Turkey expressed their assessments on the growing economic and trade relations in the days leading up to the event, which will be organized by Turkey’s Foreign Economic Relations Board (DEIK) in cooperation with the Trade Ministry and the African Union.

DEIK Turkey-Africa Business Councils Coordination Chairperson Berna Gözbaşı previously said in a statement on Oct. 4 that the forum is being organized to evaluate business opportunities in Africa during the pandemic period as well as the post-pandemic era, along with reaching new markets and potential purchasers, establishing new trade and investment partnerships and finding new financial tools.

The forum “Turkey-Africa: Strong Partners in Post-Pandemic World” is expected to see the participation of President Recep Tayyip Erdoğan, Trade Minister Ruhsar Pekcan and representatives from 15 trade and industry ministries from African countries, along with high-level representatives from the African Union and African Development Bank.

Representatives of private sector institutions from both Turkey and African countries and the chairpersons of trade and industry chambers will also participate in the event.

Speaking to Daily Sabah, Osman Nuri Önügören, the chairperson of the MON Investment Company that has been operating in Africa since the early 1990s, said the African continent is expected to be an important consumption, production and investment hot spot in the coming years. The company was among the first Turkish investors in Sudan, where it operated in various sectors and was also actively involved in real estate development in South Africa.

Önügören, who is also a DEIK member, noted that the forum will create long-lasting business cooperation and intensify business diplomacy to develop economic relations on the continent.

“The high-level contacts in recent years have created awareness in the market. The affordable quality of Turkish goods has earned it its market share over its competitors,” he said.

Erdoğan previously said that Turkey aims to further advance its cooperation with Africa in the coming period, setting a trade target of $50 billion.

Önügören noted that the government has been making tireless efforts to increase the trade volume with all regions, with a special focus on Africa.

However, he continued, Turkish companies in Africa still face stiff competition from East Asia and Southeast Asia as well as Europe and the U.S.

“European countries and the U.S. enjoy free trade and preferential agreements with many African countries, which gives them an unfair advantage,” he said, noting that exporters from East and Southeast Asia, on the other hand, are more responsive to the needs of local buyers.

Önügören said that Turkish firms need to boost their attractiveness to be able to increase and sustain their market share.

With Turkey’s newly announced three-year economic program, he continued, the country is set to achieve the export target very soon since this program specifically centered on export businesses.

Commenting on the pandemic period and what it has brought to Turkey-Africa relations, Önügören said that the outbreak has had a negative effect on Turkish and African economies, including the temporary halting of flights. However, economic relations were maintained via virtual meetings and events during this period.

He said that the continent will continue to be one of the main focuses of Turkey in the post-pandemic period, also commenting on a groundbreaking pan-African trade pact in this regard.

The African Continental Free Trade Area (AfCFTA) came into force in June 2019, after the requisite quorum of 24 countries deposited their ratification instruments. With an expected market of $3 trillion, encompassing a population of 1.2 billion people, the deal was set to make Africa the largest free trade area in terms of geographical area and the number of countries involved.

Last year, the celebration of Nov. 20 African Industrialization Day, which was declared by the United Nations General Assembly (UNGA) in 1989, aimed to raise awareness in the international community about the challenges and opportunities for Africa's industrialization within the framework of the newly created AfCFTA.

The AfCFTA was also said to enable Turkish investors active in Africa to get a bigger slice of the market and make them more competitive.

The pact "will be to the advantage of Turkish brands to set manufacturing plants in Africa and to finish off intermediate goods produced in Turkey," Önügören said.

“There will also be a lot of opportunities for Turkish contractors and original equipment manufacturers to compete for construction contracts,” he added.

Industrial exports constituted a large part in Turkey’s foreign sales to African countries in 2019. The country achieved around $11.5 billion in exports of mostly industrial products to Africa in the first nine months of 2019.

According to the 2019 DEIK Foreign Investment Index, foreign investments from Turkey to Africa reached $46 billion with an increase of 11% in contrast to the recession in global investment flows last year after the decline in 2016 and 2017.

Describing Ankara’s relationship with the continent as tracing back to the Ottoman period, Önügören said that although there have always been historical and nostalgic connections, Turkey has prolifically reentered the continent since 2003, highlighting the importance of such forums in this regard.

Several sectors will be the focus of the panels that are to be carried out during the forum, including finance, health, technology, science, industrialization, infrastructure, investments and entrepreneurship.