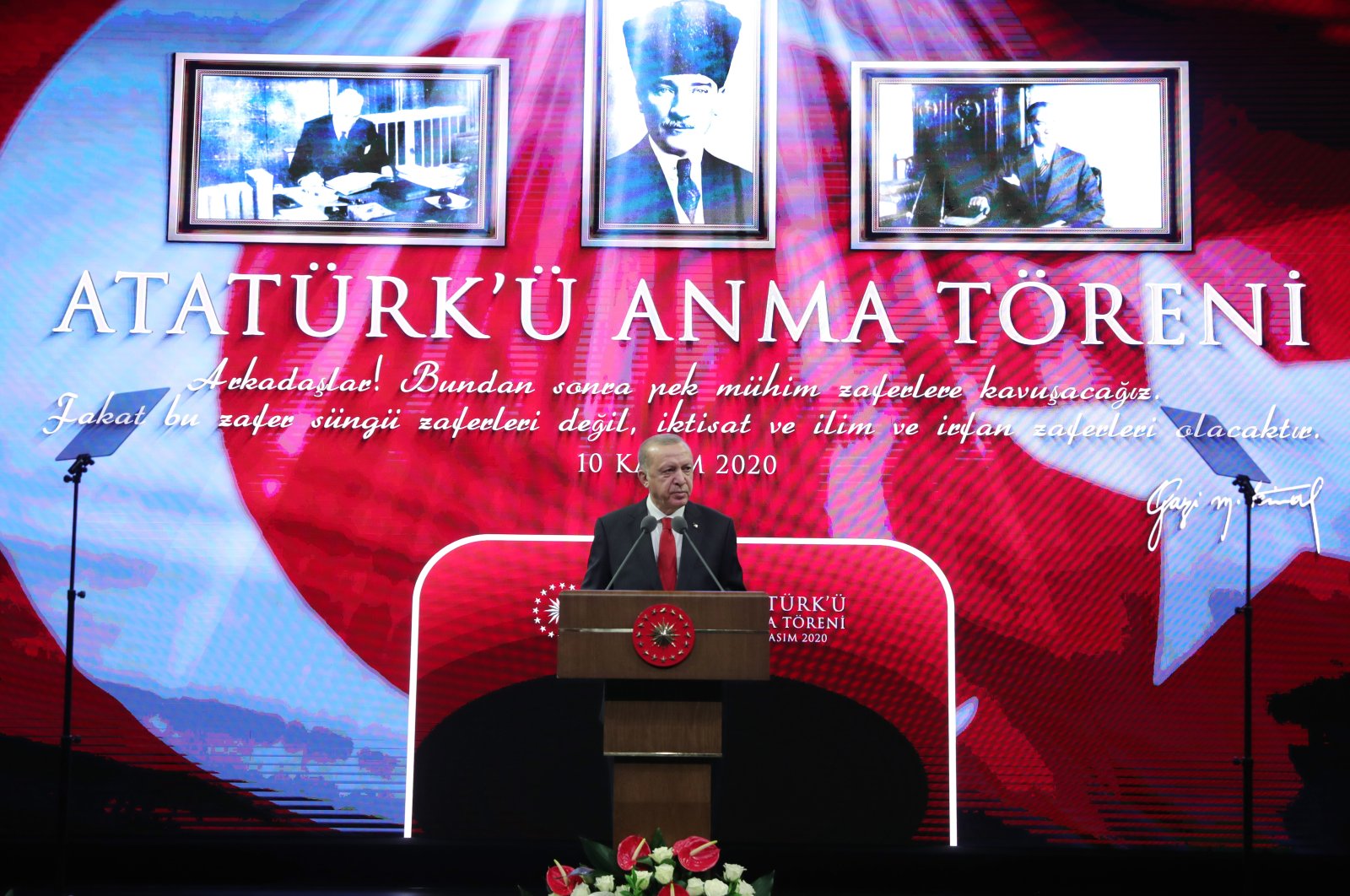 President Recep Tayyip Erdoğan speaks during a ceremony to commemorate the 82nd death anniversary of Mustafa Kemal Atatürk, the founder of the Republic of Turkey, in Ankara, Turkey, Nov. 10, 2020. (AA Photo)
by DAILY SABAH WITH AGENCIES
Nov 10, 2020 11:59 am

Turkey is in a "historic struggle" against those seeking to corner the country in a trap of high interest rates, inflation and exchange rates, the country’s president said Tuesday.

“We are in a historic struggle against those who want to imprison Turkey in modern capitulations with the shackles of interest rates, exchange rates and inflation,” President Recep Tayyip Erdoğan said at a ceremony to commemorate the 82nd death anniversary of Mustafa Kemal Atatürk, the founder of modern Turkey.

Turkey has achieved widespread development since the establishment of the republic by its founding father Mustafa Kemal Atatürk, and today strives to become one of the most developed countries in the world, the president added.

Erdoğan said Turkey was being subjected to a "deep and nefarious" siege as today the country is once again and more strongly fighting its War of Independence, first launched a century ago.

He also noted that the country’s target is to be among the top 10 economies in the world and achieving this would be the greatest gift to Atatürk, who mobilized the Turkish nation against occupying forces and established the republic from the ashes of the Ottoman Empire.

“We will succeed in becoming one of the world’s top 10 economies. This, I believe, will be the biggest gift to Mustafa Kemal Atatürk,” the president said.

Atatürk served as the first president of the Republic of Turkey until Nov. 10, 1938, when he died in Istanbul at the age of 57 due to cirrhosis.

As a tradition, Turkish people visit Atatürk's mausoleum in Ankara every Nov. 10 and pay tribute to him. Daily life stops at 9:05 a.m. local time, as sirens wail to mark the exact moment of Atatürk's passing, with millions of people across the country observing two minutes of silence.

"We work with all our strength, without compromising the rules of a free market economy, without giving up our determination to maintain growth by the hands of the private sector, without forgetting the fact that money has no nationality and no limit," Erdoğan said.

Turkey’s economy did better than its peers in the second quarter of the year and fared better than forecasts as the government, via its stimulus campaign, contained the damage from the coronavirus pandemic.

The country's gross domestic product (GDP) in the April-June period shrank 9.9% from a year earlier after it had grown 4.5% in the previous three months, according to Turkish Statistical Institute (TurkStat) data. The country's GDP grew 0.9% in 2019.

According to the government’s New Economic Program (NEP), announced this September, the economy is expected to grow by 0.3% this year as it recovers from the impact of the pandemic.

Citing the developments Turkey has undergone since its foundation, the president said the country’s population reached 83 million, up from 13 million.

The amount of foreign direct investment (FDI) in Turkey reached $223 billion over the last 18 years, he said.

The economic difficulties around the world have deepened more and more with the coronavirus pandemic, Erdoğan said, stressing that Turkey has succeeded in managing this process with minimal damage.

He also reiterated that Turkey has closed its chapter with the International Monetary Fund (IMF) for good. He emphasized that the country cut its ties with the IMF in 2013 and will not borrow from it again.

“Employment has always been at the center of our development policies and practices,” Erdoğan said, adding that unemployment continues to decrease.

“A state that cannot distribute the country’s wealth to its people by strengthening employment and spreading prosperity cannot maintain its existence in a healthy and long-term manner. For this purpose, we plan to put our country among the 10 largest economies in the world,” the president concluded.