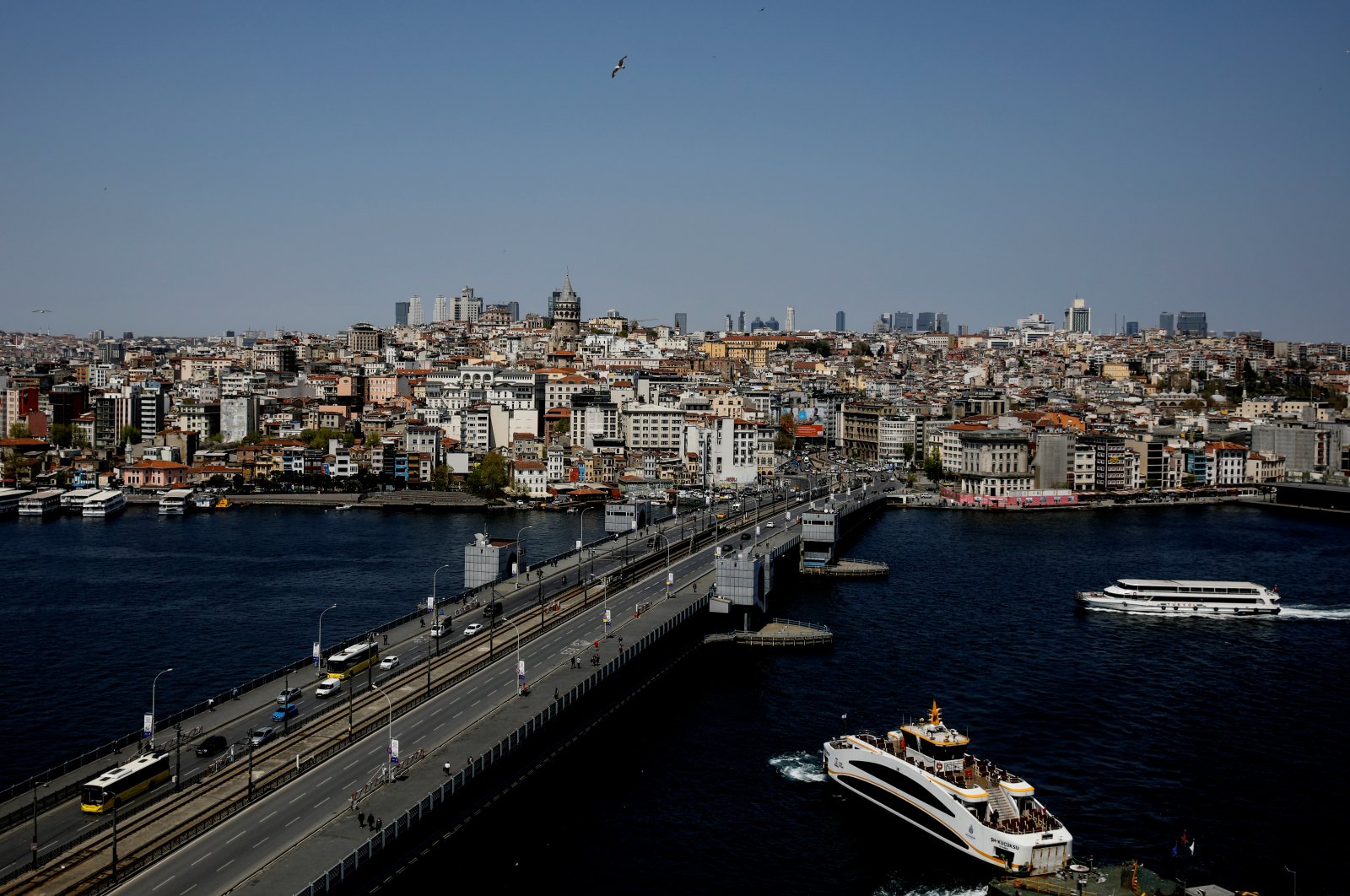 The Galata Bridge and historical Galata Tower are pictured during the outbreak of COVID-19 in Istanbul, Turkey, April 27, 2020. (Reuters Photo)
by Daily Sabah with Wires
Apr 29, 2020 2:41 pm

Current developments are said to indicate that putting the economy back on track will be possible at the end of May, while steps will be taken without allowing a second wave of coronavirus infections

Amid a steep decline in coronavirus infections and an increasing number of recoveries, Turkey is discussing plans and steps to return to normal life and reopen the economy.

The government aims to begin reviving the economy in late May after a slowdown due to measures to contain the pandemic, while minimizing the risk of a second wave of infections, a senior official told Reuters.

Separately, officials with direct knowledge of the plans were cited by Bloomberg as saying that the country was elaborating on whether to start reopening with the resumption of some domestic flights as early as mid-May.

"Taking under control the speed of the spread of the pandemic and bypassing the peak process with a much lower level compared to other world examples has increased our morale and hope in terms of our tradesmen opening up the shutters again, and production returning to its old level," Albayrak said on the sidelines of the meeting.

Many countries from Germany to Italy and the U.S. are beginning to relax their lockdowns and measures imposed to stem the spread of the virus as the global economy suffers its deepest downturn since the Great Depression.

The total number of registered cases in Turkey rose by 2,392 to 114,653 on Tuesday, Health Ministry data showed, maintaining its downward trend. Fatalities increased by 92 to 2,992, according to the information.

Tuesday also saw recovery figures reach another record high of 5,018, bringing total recoveries to 38,809, more than a third of all infections. Numbers also showed that for the fourth straight day, Turkey has seen more COVID-19 recoveries than new cases.

"Recent studies have indicated that a reopening of the economy will be possible at the end of May and current developments confirmed this. Steps will be taken to reopen without allowing a second wave," the senior official said.

"When we look at the case and death numbers, we have come to a positive point, (and) there is a possibility for the economy to reopen," the official added, speaking on condition of anonymity.

Turkey has shuttered schools, restaurants and cafes to curb a surge in cases of the COVID-19 disease. Though some workplaces remain open, it has imposed partial stay-at-home orders, largely closed borders and slowed domestic movement.

According to a Bloomberg report, aviation authorities have said carriers could resume flights as early as May 15, however, the decision is subject to review by health experts and approval by President Recep Tayyip Erdoğan. The government is inclined to resume flights around the three-day Ramadan Bayram, or Eid al-Fitr, which marks the end of the holy fasting month, one of the officials said.

“We are already ready to resume flights as long as it is approved” by health authorities, low-cost Pegasus Airlines CEO Mehmet Nane was cited as saying by Bloomberg. The Transportation Ministry has been contacted to stress the need for a board to set pandemic-related safety rules, said Nane, who is also the head of Turkey’s Private Aviation Operators Association.

“Social-distancing rules inside the plane are just the tip of the iceberg, there is need for a comprehensive arrangement for rules about ticketing desks, security and access to the planes,” Nane added.

Erdoğan has said the country aims to return to normal life after the end of Ramadan in late May and on Monday he said the government would soon set out specific steps and dates. Erdoğan said businesses and companies should make preparations to potentially resume operations after Ramadan Bayram.

The reopening "will allow positive GDP readings in the second half of the year and will minimize the annual contraction," he said.

Erdoğan initially announced a TL 100 billion package ($14.3 billion) – the Economic Stability Shield – to support citizens and businesses amid the pandemic on March 18, postponing debt payments and reducing tax burdens on some sectors, including transportation and tourism. Since then, Ankara has gradually widened the measures.

The country's support for the real sector and lower-income groups amid the pandemic has reached TL 200 billion, Erdoğan said Tuesday.

Treasury and Finance Minister Albayrak has said the government has provided TL 107.4 billion to some 120,000 companies and TL 16.8 billion to support traders.

Erdoğan noted that thanks to the measures taken by the government, the country's economy and production would quickly return to normal. "Production in our country will rise rapidly as before when we gradually lift the outbreak measures according to a schedule we have set," he said.

Separately, Hüseyin Altaş, the head of a group of Turkish malls that closed their doors independently last month, said there were plans for a gradual reopening from May 11 depending on demand from retailers and approval from a health advisory board.

Private lender Denizbank said it had extended working hours in branches to help corporate borrowers, while the head of an auto parts manufacturers association said reopening the economy in May would be a best-case scenario in which production only falls some 15% and returns to normal by September.

Altaş of the Shopping Centers and Investors Association (AYD) said a planned phased reopening from May 11 would initially exclude cinemas, playgrounds and restaurants, which the government shut down due to an especially high risk of coronavirus transmission, until approvals are given.

Malls in hard-hit cities such as Istanbul, the worst area of outbreak in Turkey, may remain closed longer but could reopen by June, the official said.

“The shopping malls have already lost a quarter of their annual gross income of about TL 160 billion,” Bloomberg cited Altaş as saying.

Sinan Öncel, head of the United Brands Association (BMD) representing around 50,000 stores, said retailers would ask malls for rent discounts and aim for 50% of normal revenues over the first few months.