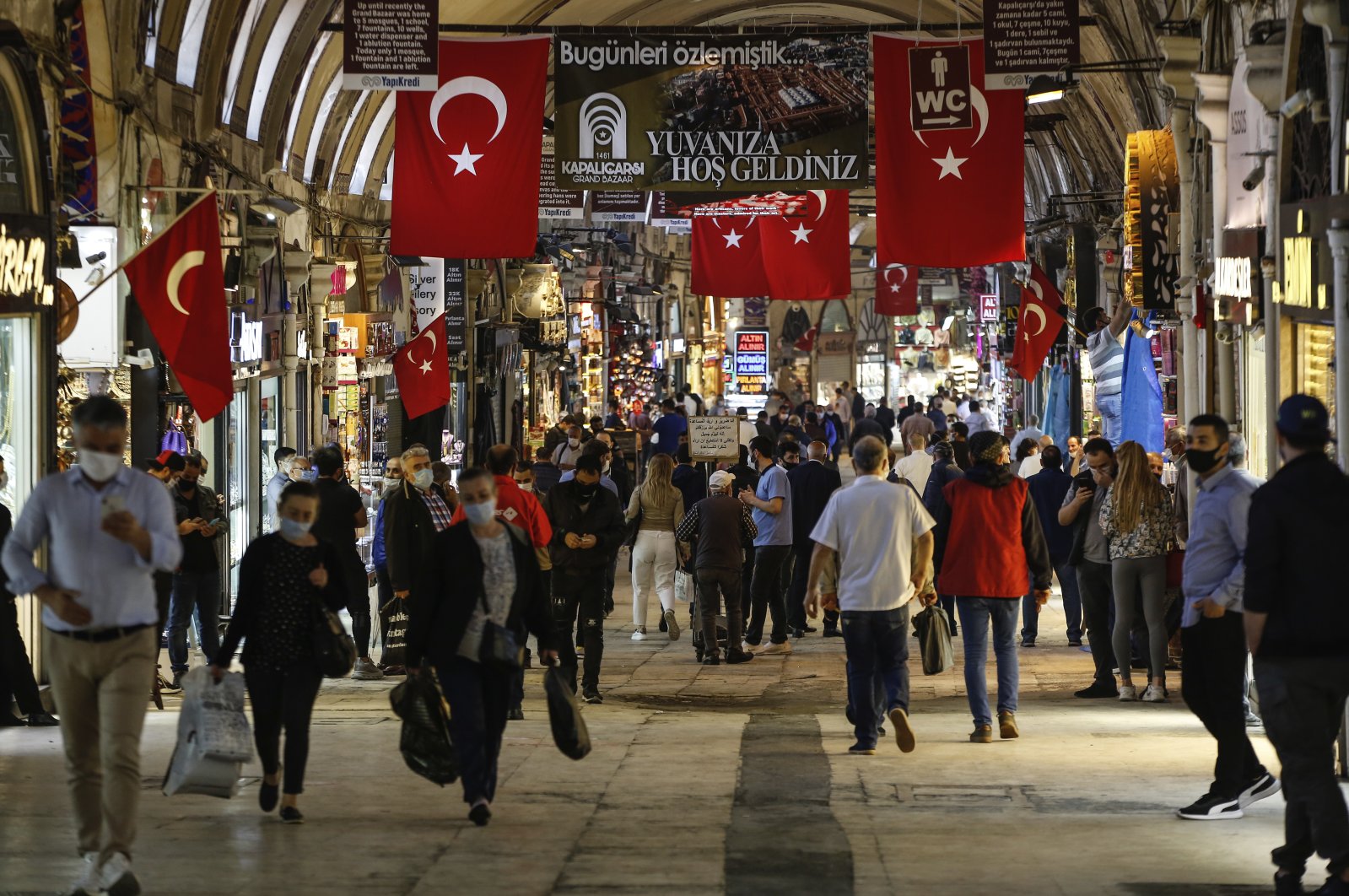 People, most wearing protective face masks for protection against the coronavirus, walk at the iconic Grand Bazaar in Istanbul, June 1, 2020. (AP Photo)
by Daily Sabah with Wires Jun 11, 2020 5:49 pm
RECOMMENDED

Measures to curtail the coronavirus pandemic caused a record drop in the gross domestic product (GDP) of G-20 countries in the first three months of 2020, the largest decline since records began in 1998; while Turkey and India were the only two G-20 economies to register growth from January through March, the Organisation for Economic Co-operation and Development (OECD) said.

The real GDP in the G-20 countries dropped by 3.4% in the first quarter, with the steepest declines in China, where the economy shrank 9.8% from the fourth quarter of 2019, and in France and Italy, down 5.3% each, the OECD said in Thursday’s report.

These were among the first countries to impose drastic lockdowns against the virus. "As a comparison, the GDP fell only 1.5% in the first quarter of 2009, at the height of the financial crisis," it noted.

Turkey and India were the only two G-20 economies that recorded positive growth in the first quarter, with 0.6% and 0.7% respectively, the OECD added.

The OECD said year-on-year the GDP in the G-20 countries contracted by 1.5% in the first quarter of 2020, following growth of 2.8% in the previous quarter. Among G-20 economies, Turkey posted the highest annual growth with 4.4%, while China recorded the largest annual shrinkage with 6.8%.

The Paris-based agency had already warned Wednesday that the coronavirus crisis has triggered the worst global recession in nearly a century – and the threat it poses is not over yet even if there is no second wave of infections.

Updating its outlook, the organization forecast that the global economy would contract 6% this year before bouncing back with 5.2% in growth in 2021 – providing the outbreak is kept under control.

However, it said an equally possible scenario of a second wave of the contagion this year could see the global economy contract 7.6% before growing only 2.8% next year.

Hundreds of millions of people have lost their jobs, and the crisis is hitting the poor and young people the hardest, worsening inequality, the organization said.

In the event of a second wave of the contagion later in the year, the economic output could shrink by as much as 7.6%, it said while warning that in both scenarios, the recovery would be "slow and uncertain."

Meanwhile, the euro area is heading for a downturn of 9.1% this year followed by 6.5% growth next year. But the recession could reach 11.5% this year in the event of a second outbreak, followed by growth of 3.5% in 2021.

Britain is expected to see the worst downturn among the countries covered by the OECD, with its economy forecast to contract 11.5% this year before recovering 9.0% next year. A second outbreak could trigger a slump of 14.0% this year followed by a rebound of 5.0% next year, the OECD said.

In the case of a second wave of the outbreak, it forecast that the average unemployment rate across the 37 developed countries that it represents would double this year to 10% and see "little recovery” in 2021. In a more optimistic scenario, the figure would be 9.2%. In poorer countries, the numbers are often higher, and informal workers are especially vulnerable.

The agency urged governments to tackle inequalities by investing in health care systems, global cooperation for medical supplies, vaccines and treatments and retraining people whose sectors have been the hardest hit.