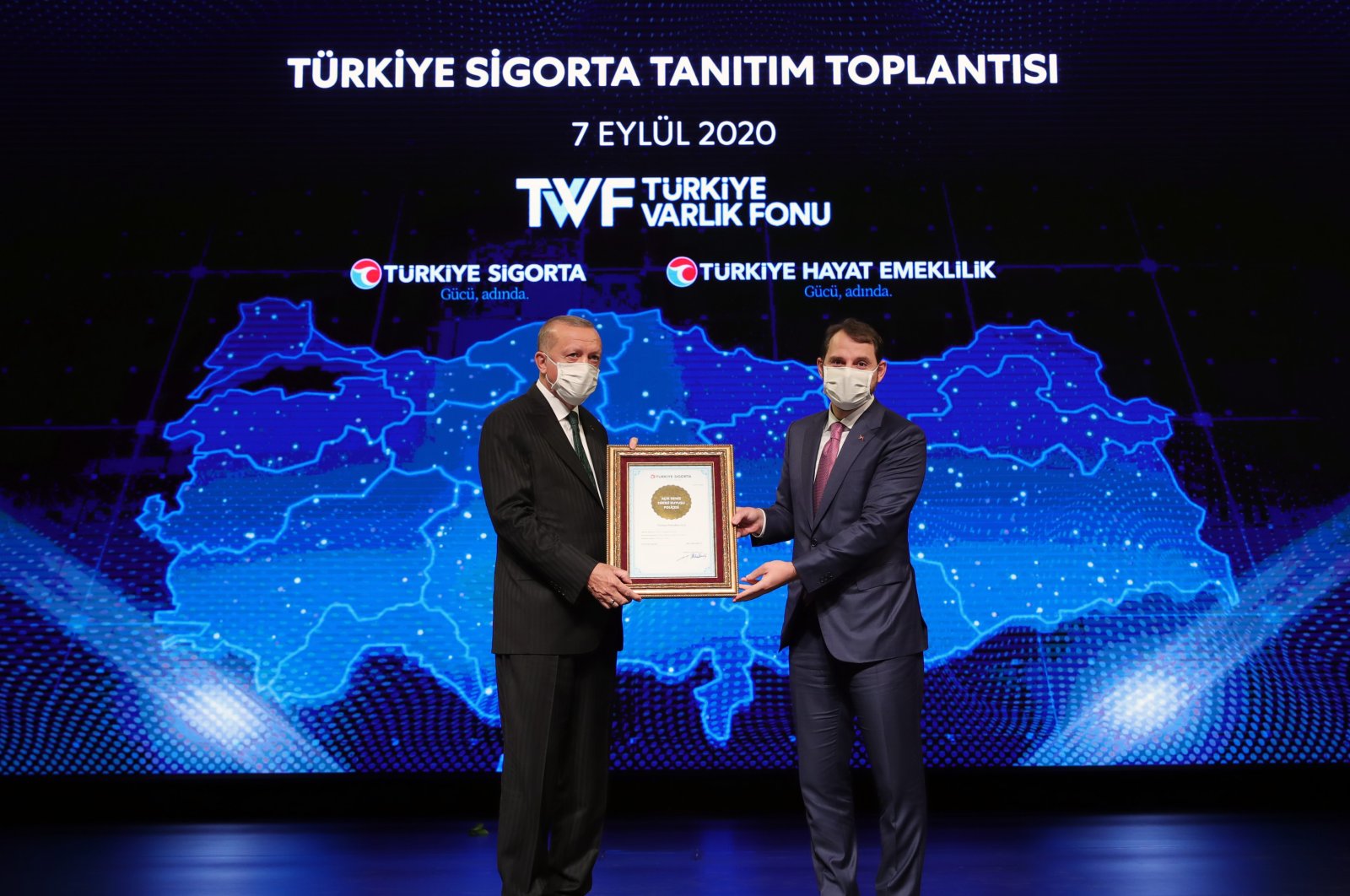 Having combined six public insurance companies under a single roof, Turkey Insurance will be the country’s biggest insurance company that will bring a new dynamism to the sector, President Recep Tayyip Erdoğan said on Monday.

Erdoğan’s remarks came during the launching ceremony of Turkey Insurance, which was established after the Turkey Sovereign Wealth Fund (TWF) in April this year took over insurance and pension companies owned by state lenders to consolidate them in an effort to increase their global competitive power.

“We are implementing a strategic move that I believe will give our insurance sector a new vision. We are putting into action the largest insurance company in our country that will serve 15 million customers,” Erdoğan said in the capital Ankara.

Turkey Insurance will be a strong market actor in its region and global competition, he stressed. “We will witness that all stakeholders of the economy, and our citizens will feel the recovery seriously.”

Also addressing the ceremony, Treasury and Finance Minister Berat Albayrak expressed beliefs that the company would be a strong market player in regional and global competition.

“The insurance sector will become more organized and more competitive after the merger under Turkey Sovereign Wealth Fund,” Erdoğan added, stressing that the new company will make a “significant contribution to financial markets and the real economy.”

The TWF in April said it acquired all shares of public insurance companies for TL 6.54 billion ($875 million).

The consolidation was a project of the Treasury and Finance Ministry which was announced in December to raise the country's domestic savings rate and grow the non-banking financial services sector.

They will continue their path under the roof of Turkey Insurance and Turkey Life Pension (Türkiye Sigorta and Türkiye Hayat Emeklilik), Erdoğan said.

“By bringing six institutions with public capital under one roof, Turkey Insurance will boost their efficiency, cut costs and bring dynamism to the sector," the president underlined.

Erdoğan said they had launched the TW in 2016 with an aim to leave a strong economy to the next generations, stressing that the fund has reached a strong portfolio of companies.

Albayrak said via funds it accumulates, the insurance and pension sector also performs the functions of providing resources for the financing needed for economic growth.

He said the Turkish insurance and pension sector ranked 39th in the world with its current capacity, adding that this rank was far behind the desired goals in terms of goals set by the country.

Albayrak stressed that they have set the actual target, which is to jump to higher ranks and leave behind countries that are better in this sector.

Emphasizing that the insurance and pension sectors were critical in terms of economic stability and development, Albayrak noted that these sectors, which fall below their potential, have been included among the “strategic sectors” within the scope of the new economic model.

To enable the insurance sector to reach the desired levels and within the scope of the new economic program, Turkey has established Insurance and Special Pension Regulation and Supervision Authority (SEDDK) and Türk Reasürans A.Ş. (Türk Re).

Turkey Insurance will be one of the most important rings of these reformist moves, Albayrak said.

“We are confident that Turkey Insurance, which has assumed an important mission in the name of spreading insurance services to the base in Turkey and continuing stable growth, will move the insurance sector in our country to a more effective place in global competition with the goal of becoming a global brand in the coming period,” the minister noted.

Albayrak emphasized that the company “will be a leading brand in contributing to the improvement and deepening of financial markets, increasing the contribution of the insurance sector to economic growth and enabling the sector to reach a more dynamic structure.”

On the other hand, both Erdoğan and Albayrak stressed the performance of the Turkish economy during the coronavirus pandemic period.

“The world has entered a new era where nothing will ever be the same. Although COVID-19 is primarily a health-related crisis, its consequences have deeply shaken every area of our lives. We are still feeling the aftershocks of the pandemic in many areas, from the labor market to trade, from personal relationships to public safety, from the economy to tourism,” Erdoğan said.

There have been major production and job losses around the world, he noted, stressing that the data showed that many major economies were significantly shaken by the pandemic.

“With a better understanding of the devastating impact of the outbreak, international organizations have had to make downward revisions in their global growth forecasts. Economic data and expectations show that even large economies such as the U.S., Germany, Japan and the United Kingdom have been shaken by the impact of the outbreak, inflicting very serious economic losses,” he said.

For his part, Albayrak said the country continued its investments, projects and strategic reforms despite the pandemic.

“If it wasn’t for the outbreak this year, we would have had $40 billion in tourism revenue in our budget. Under normal circumstances, when we include into the equation the tourism revenues we have lost due to the pandemic in the first eight months of the year, Turkey would have continued seeing a current account surplus this year just like in 2019, and not a current account deficit,” the minister noted.

“The wheels in the industry continue to turn strongly,” Albayrak noted. “In strong coordination with all our institutions in the economy, we continue to take steps towards our goals. We are working for a growth model based on value-added production, employment and exports,” he concluded.