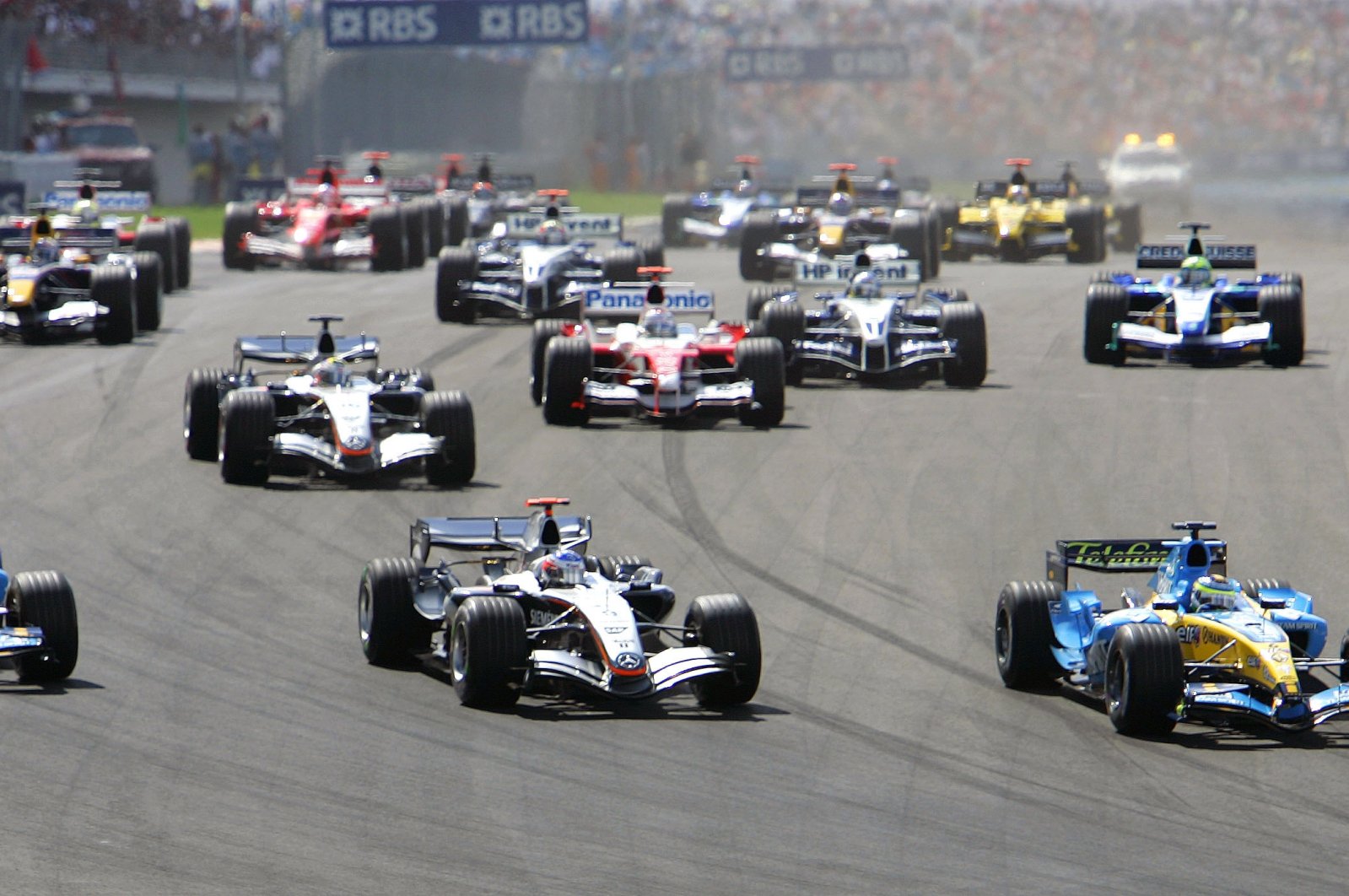 McLaren's Formula One driver Kimi Raikkonen of Finland (C) leads the pack, next to Renault's drivers Fernando Alonso of Spain (L) and Giancarlo Fisichella of Italy (R) after the start of the Turkish Formula One Grand Prix at Istanbul Park race track in Istanbul, Aug. 21, 2005. (Reuters Photo)
by Hülya Güler Oct 11, 2020 3:16 pm

After a nearly decadelong break, Turkey now wants to be permanently involved in the Formula One calendar and looks to achieve this through a sustainable economic model, with initiatives underway

Having been put on the Formula One calendar after a nearly decadelong break, Turkey now looks to secure a lasting place in F1 after this year's race.

"Our goal is to sign a long-term contract next year and permanently join the calendar," said Vural Ak, chairperson of Intercity, which operates the Istanbul Park racetrack.

The Turkish Grand Prix, scheduled for Nov. 13-15, was put back on the Formula One calendar in August. Turkey last hosted a race in 2011 at the Istanbul Park circuit, a popular track among drivers.

"We want to be a permanent feature in the F1 calendar. But it needs to be done with a sustainable economic model. We have also made some initiatives in this regard. We have developed a formula that will make sure no funds come out of the state's coffers," Ak told the Turkish language daily, Sabah, in an interview.

There was great interest in the Turkish Grand Prix after Intercity sold tickets at record-low prices and announced that as many as 100,000 fans would be allowed in.

However, the Istanbul Governor's office announced last week that the race weekend would be held without fans based on a recommendation by the Istanbul Provincial Pandemic Council.

Elaborating on the issue, Ak noted that from the first moment the decision was made to hold the race, they were prepared for the possibility that it would be done without spectators.

"Of course, we were upset. We had planned a very good event environment and the audience would have made a great contribution to this atmosphere. The audience was as upset as we were," he said.

Intercity said all tickets would be fully refunded.

"Record ticket sales came in a very short period of time," Ak said as some 80,000 tickets, corresponding to one-third of the capacity, were instantly sold out.

"We want to set an audience record by selling 200,000 tickets next year and because they saw that we could break it, they wanted to include us in the calendar. The difficulty of the track attracts the drivers and, above all, Turkey's performance during the pandemic was instrumental in bringing the race to Turkey," the Intercity chairperson noted.

Ak stressed they were moved by the fact that many of the spectators refused the refund and expressed a willingness to donate the money for the F1 track.

"But we could not accept it because legally we cannot receive donations. But we were very moved, very happy with this kind of support," he said.

Ak said a model that includes the financing and undertaking of sports activities by the private sector needs to be developed to promote Istanbul and Turkey.

"It is important that the state supports issues like regulations and security. Apart from that, we need to sit down with Turkish companies and make an agreement on a financial budget, including sponsorship, television rights, money from food and drink and from the tickets," Ak noted.

He said, for instance, global logistics giant DHL made a deal for this year's race abroad, which he stressed "we did not even know." "Here, a Turkish company should embrace the race and give the race its name. In addition, we may have the opportunity to print the names of three Turkish companies that are on the way to becoming global brands on the edge of the track with a sponsorship agreement."

Ak added that they see the flag carriers of each host state undertake the role of the main sponsor, like Emirates in Dubai, Etihad in Abu Dhabi, Gulf Air in Bahrain, Singapore Airlines in Singapore and Qantas in Australia.

"These are the companies that gave the races their names. Turkish Airlines is the best sponsorship the Turkish Grand Prix can get. We are already in talks with companies that could be sponsors next year. We have also communicated a business model with the F1 management where we can create different revenue items," Ak noted.

"Although it is our second year, last year we reached 200,000 participants. Last year, 400,000 visitors attended the Frankfurt autoshow, one of the largest in the world, in 10 days. We have reached half of this in two years. This year, if the conditions were suitable, we would turn the F1 race into this kind of festival. This proposal has attracted a lot of interest from F1 management. They had also been looking at this kind of program. They would have also observed that in this year's race. If the pandemic conditions allow, we plan to create this festive environment in next year's Formula One race," Ak noted.

Ak said they evaluated hosting opportunities after several races were canceled due to the coronavirus pandemic. He stressed there was a consistent dialogue with the F1 management to again become part of the calendar.

"After the cancellations due to the pandemic, they asked, 'Are you ready?' We said we have been ready for four years and started negotiations. We have made a huge financial sacrifice for our country. Our goal is to sign a long-term contract next year and permanently enter the calendar," Ak said.

It would have been difficult for Turkey to reenter the calendar if this year's chance had not been evaluated, he stressed.

"If we complete this year's race very successfully, including the experience of the technical team from the first day to the last day, we will have the opportunity to sit down and talk about 2021 and beyond immediately after the race. This time we will enter the calendar with a longer-term contract. We do not know which countries in the Americas and Asia will be able to return, depending on the course of the pandemic ... America, Mexico and Brazil are in very bad shape with the disease," Ak noted.

For the next year, he added, they need to make a deal that includes a rational, repeatable and sustainable revenue model.

"We have made this year a great sacrifice. We do not worry about the loss. We say it is a very good thing for our country," Ak said.

The event next month will also promote Turkey's first domestically manufactured car to the world, he said.

The vehicle has been developed by the Automobile Joint Venture Group (TOGG), a consortium of five major Turkish companies with mass production expected to start in 2022. TOGG will be making five different models – an SUV, a sedan, a C-hatchback, a B-SUV and a B-MPV – by 2030.

"A very important project. At Intercity, we care about it and follow it closely ... The formula for the domestic car was accurately developed. The private sector took over the project, which is very good. During the F1 race, TOGG is planning to be introduced to the world. We are talking to TOGG's management," Ak said.

Elaborating on the preparations for next month's race, Ak said technical teams from different countries have begun to arrive.

"The surrounding hotels are already full. During this process, seven jumbo jets will arrive at Sabiha Gökçen Airport. A total of 500 trucks will bring the supplies here. It will be a race without spectators but a technical team of 4,000 people is coming to Istanbul," he said.

In a goodwill gesture to the drivers, Ak said they decided to renew the track's asphalt even though there was no need.

"We have been doing all of Istanbul Park's maintenance regularly for seven years and we are ready for all kinds of events," he said. "The asphalt is being renewed now. I think drivers will love it."

Istanbul Park is known among Formula One drivers for its thrilling and challenging circuit. The 5.33-kilometer (3.31-mile) track was inaugurated in 2005 and is located in the city's Tuzla district on its Asian side.