Turkey looks to benefit from opportunities to boost ties with US 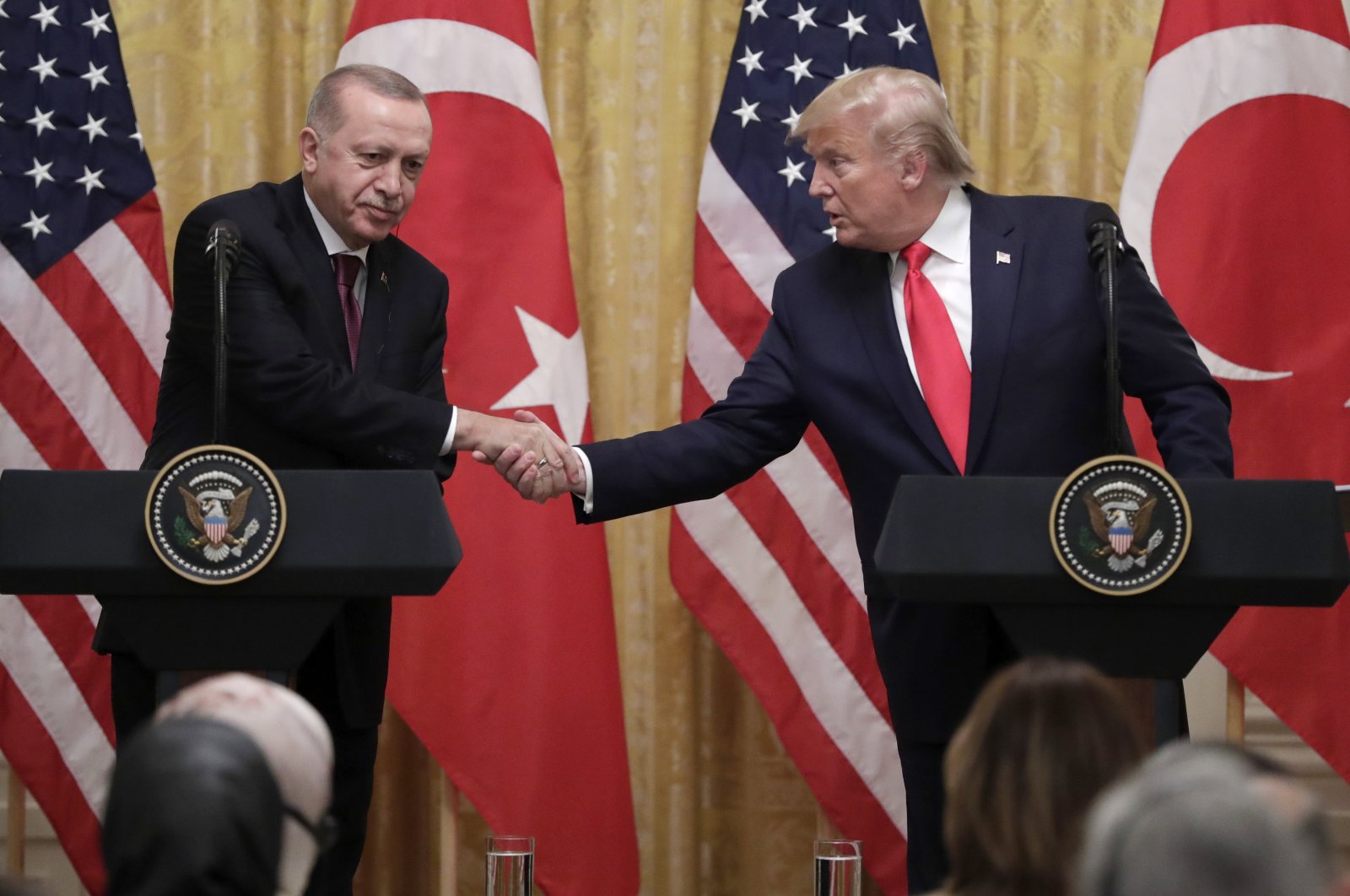 Turkey is one of the most likely candidates to claim a share of the pie that will emerge from the shrinking U.S.-China trade corridor, which may drop as much as $200 billion by 2023

Turkey looks to benefit from the shift and new approaches in supply chains, which have been hit hard by the coronavirus pandemic, as well as from the contraction in the trade corridor between the U.S. and China amid the ongoing sharp deterioration in their ties, the chairman of the Turkey-U.S. Business Council (TAIK) said Wednesday.

Mehmet Ali Yalçındağ’s remarks came amid a presentation of the findings of the first phase of a new comprehensive study TAIK initiated together with a global management consulting firm, Boston Consulting Group (BCG), to determine new opportunities that could further strengthen economic relations between Turkey and the U.S.

The pandemic has deeply affected economic relations around the world, leading to structural transformations, Yalçındağ said.

“We believe that these changes will also create very positive opportunities for Turkey-U.S. relations. But we need to take action as soon as possible to take advantage of these opportunities,” he said.

He noted that they want to understand these effects better and take swift and decisive action by identifying new economic opportunities between Turkey and the U.S.

“To this end, we have started a new comprehensive study with BCG. In this study, we evaluate the opportunities that will arise from the loss of China's trade with the United States and determine the steps Turkey needs to take to replace China,” Yalçındağ explained.

He said detailed findings and recommendations of the study would be shared at the beginning of September.

For the past few years, President Recep Tayyip Erdoğan and his American counterpart Donald Trump have both embraced a target to increase bilateral trade to $100 billion (TL 697 billion). The desire to reach that goal was voiced on a number of occasions by officials of the two countries.

Turkey's oldest and largest business council, TAIK has been advocating bolstering trade and economic relations between Turkey and the U.S. within the scope of the Foreign Economic Relations Board (DEIK).

TAIK has been working with BCG to find ways to achieve a bilateral trade volume of $100 billion between the two countries.

Referring to the effects of the pandemic, the TAIK chairman underscored that the most important of these effects has been that many companies on a global scale have adopted a new approach in their supply chains.

“These companies are transitioning from a supply chain management focused solely on cost or efficiency to a model where risks in procurement are minimized. In this new structure, we observe different approaches such as bringing supply chains closer to the main production center and preventing them from being distributed to different geographies and gathered in one center,” he said.

This change will have a very significant impact, Yalçındağ noted, as China, which has been increasingly at the center of supply chains over the past 30 years, is losing its strong position.

“It is anticipated that some of the products and services supplied from China will be met by production within the United States, while some will be shifted to other production centers around the world. At this point, we believe that important opportunities will arise for Turkey,” he added.

On the other hand, another important factor in China’s trade with the U.S. has been the further deterioration of trade tensions between the two countries during the pandemic.

“With COVID-19, the issue of national security, which has become more apparent in sectors such as pharmaceuticals, telecoms and IT (information technology), has been at the center of the tension between the two countries. That is why the U.S. is taking extremely decisive steps to reduce its imports from China, which it has rapidly reduced in 2019, in the coming years,” Yalçındağ noted.

The U.S. reduced its imports from China by $91 billion to $472 billion in 2019. It still has a trade deficit with China of around $350 billion. The U.S. last year turned to importing more from other countries such as Vietnam, Mexico and Taiwan. Its imports from these countries increased by $18 billion, $12 billion and $9 billion, respectively.

“Turkey, on the other hand, increased its exports to the U.S. by around $400 million in 2019 and did not get the share of the pie to the extent it wanted,” Yalçındağ said.

According to the study by BCG global trade experts and research teams, he added, the contraction in the trade corridor between the U.S. and China in 2019 will deepen further in the years to come.

“By 2023, the trade corridor between the United States and China is projected to narrow further by $150 billion to $200 billion. This presents extremely important opportunities for other countries,” Yalçındağ noted.

He went on to say that Turkey is one of the biggest candidates to get a share of this pie but added that it should also be noted that there are strong competitors in this area, such as Vietnam, Taiwan, Poland and Mexico. “Turkey needs to take bold steps forward in addition to moving its strong sectors forward in order to get the share it deserves from the volume of imports of the United States,” he said.

“The first of these is the electronics and electrical equipment sector. This sector, which currently accounts for 17% of the world trade with a volume of $3.3 trillion and has the largest share global trade, is the sector that we expect to experience the biggest contraction between China and the United States. China, which accounts for 40% of U.S. imports in this area, has lost $34 billion in exports in this sector, which stood at $209 billion in 2018, in 2019 alone. We anticipate that China’s exit will continue to accelerate in this sector. Currently, Vietnam and Taiwan stand out as countries where that capacity has shifted,” he added.

He further noted that in their meetings with sector representatives, they observed that Turkey has a good level of competence in this industry but strong enough relations have not been established yet in the U.S. market.

“Turkey stands out especially with its existing company and R&D (research and development) capacity, with its competent workforce to work in this sector, and most importantly with its cheap labor cost structure. Companies such as Arçelik, Vestel, Netaş, ASELSAN and Ayesaş, which stand out in different areas of the sector, contribute positively to the competence development of the sector. Of course, Turkey needs to take these competencies further in the medium- and long-term and turn to products with high technology content. We believe that we will make a serious breakthrough in this sector by acting in partnership with our government, sector representative nongovernmental organizations, U.S.-based companies with investments in Turkey and our local companies,” he explained.

Yalçındağ pointed to information and communication technologies (ICT) as the other area where Turkey should take bold steps.

India and Ireland are the leading countries in U.S. imports, which are at $44 billion.

“Similarly, we see that Turkey has not been able to use its competencies and cost advantages adequately for the U.S. market. It is highly likely that Turkey will become a regional technology hub for U.S.-based companies and involve their local firms in further service exports. The leading conglomerates in Turkey have recently stepped up their investments recognizing the importance of this area: New formations such as Koç Digital, Sabancı Dx, Çalık Digital are coming to the fore and accelerating the development of competence in this area. Companies such as NETAŞ, Softtech and Innova, which are strong players in the sector, can also take active roles here. In addition to these companies, it is also important to support the development of start-ups in Turkey and ensure that they gain scale,” he said.

Yalçındağ also noted the industries Turkey is already extremely strong in and that take an important place in U.S. imports, such as automotive parts, textiles and apparel, white goods, building materials and furniture, adding that these will continue to be the driving force in Turkey’s exports to the U.S.

Apart from trade, the TAIK chairman pointed to investments that will support commercial activities and joint ventures with the U.S. in Africa.

On the joint ventures with the U.S. in Africa, Yalçında said: "Seeking to reduce China’s influence on the African continent, the United States sees Turkey as a reliable partner in construction and infrastructure investments. It will make a positive contribution to many sectors in Turkey.”

'Turkey should aim for free trade deal with U.S.'

Also speaking at the news conference, DEIK Chairman Nail Olpak said Turkey should seek a free trade agreement with the U.S. "We have three strategic regions, America, Europe-EU and Asia Pacific, in our post-pandemic road map with the aim of steering our trade in these regions," Olpak said.

“During our webinar meeting with the U.S. Senator Lindsey Graham, we underlined the importance of a free trade agreement (FTA) with the U.S. We have a $100 billion trade volume target with the U.S.,” Olpak said. “Thus, the U.S. will be one of the leading countries among our target countries in the coming period.”

He said the world was in a new era in which it is not enough for large-scale economies to be dependent on a single source and that it also holds great risk for the supply chain.

“The definition of logistics, for sure, has now changed. While logistics has only been explained with the concepts of distance and proximity until now, today, even if the products you want to buy are nearby, they lose their function if they are not available in extraordinary situations,” Olpak noted.

“Therefore, we are going through a process in which we experience great changes in every aspect of the world economy and foreign trade, and we must be ready for transformations,” he added.