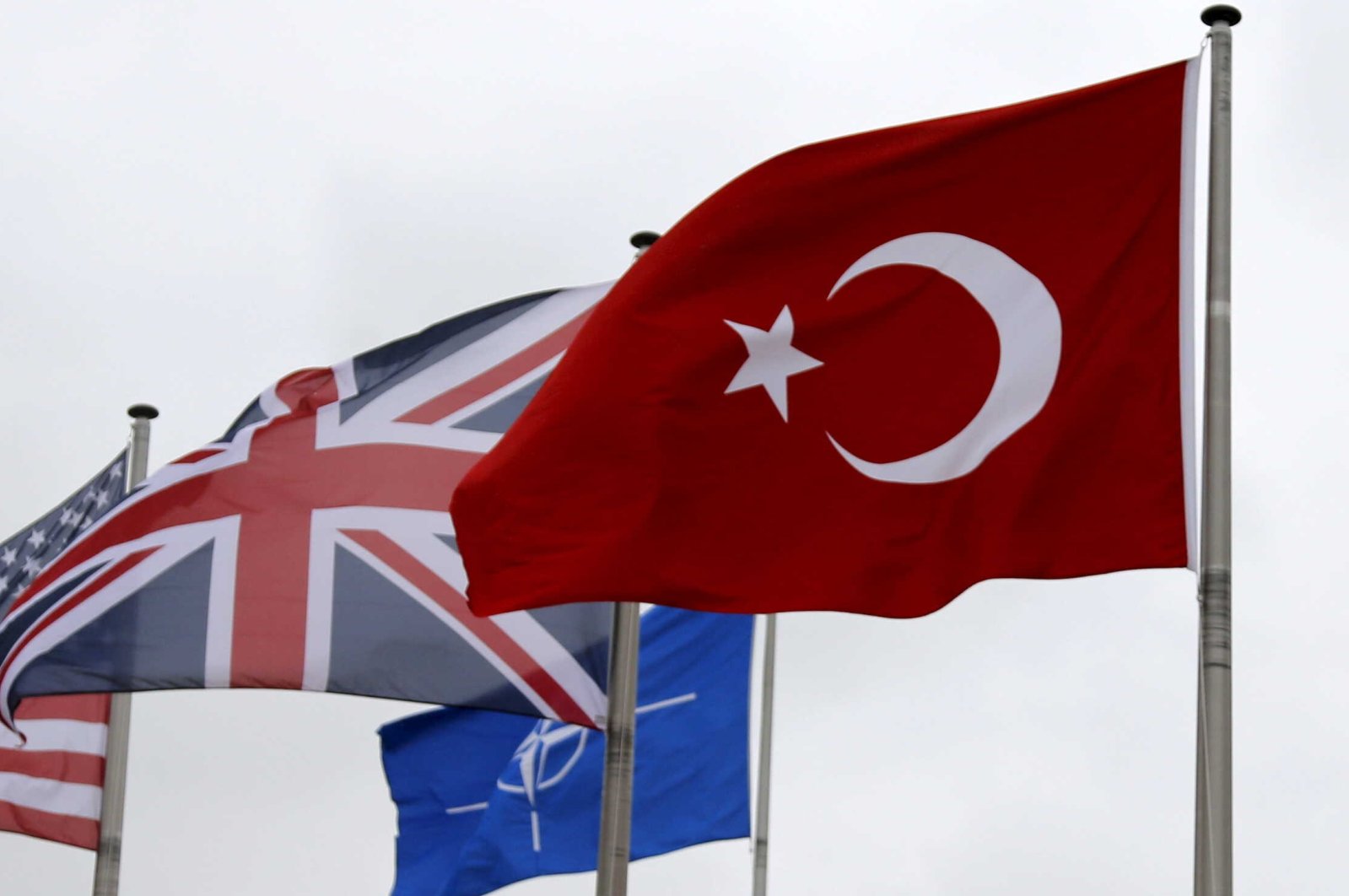 A Turkish flag (R) flies near the flags of the U.K. and other NATO members during the North Atlantic Council (NAC) meeting upon Turkey's request for Article 4 consultations, at NATO headquarters in Brussels, Belgium, July 28, 2015. (Reuters Photo)
by DAILY SABAH WITH AA Oct 08, 2020 1:08 pm

Turkey and the United Kingdom continue to strengthen their relations in every field, including the economy. As Brexit looms, the countries seek to ensure a continued strong trade relationship

Within the scope of the New Economic Program (NEP), Turkey is planning to create a new preferential trade system to inject more dimensions and dynamism into economic relations with the U.K. in the post-Brexit era.

According to the NEP valid for 2021-2023, announced late last month, Turkey also plans to improve and deepen economic relations with other countries through Preferential Trade Agreements (PTAs) and Free Trade Agreements (FTAs), taking into consideration the sustainability of the current account balance.

The Foreign Economic Relations Board’s (DEIK) Turkey-U.K. Business Council President Osman Okyay said that Turkey has had a foreign trade surplus in its economic relations with the U.K. since 2001 and that is also the case for trade relations with other developed countries.

Okyay also said that Turkey is one of the 17 countries mentioned in the U.K.’s Export Master Plan.

“Likewise, as the DEIK Turkey-U.K. Business Council, we get in touch with the British authorities and they frequently reiterate that they aim to improve trade with Turkey,” he told Anadolu Agency (AA) on Thursday.

Okyay also said that nearly 98% of Turkey’s trade with the U.K. is exempt from customs taxes.

“If a new (FTA) agreement is not signed, the World Trade Organization (WTO) model will be considered. This means the end of tax exemption and the imposition of 5%-12% of customs tax on Turkish goods. The signing and implementation of the Free Trade Agreement is critical for the continuation of our trade with the U.K. without pause, the protection of our competitive power against third countries that we have had since 1996, and our ability to achieve the $20 billion (TL 158 billion) trade volume goal,” he added.

Okyay stated that it would be possible to maximize the added value, employment and investment potential through a trade deal, noting that the U.K. is among the top three countries investing in Turkey.

He added that the two governments have both expressed a strong interest in the work regarding the new Preferential Trade System and that talks are heading in a positive direction.

“As far as we know, the sides’ priority is to maintain the current situation and later advance to the new phase with an agreement that will surpass the advantages provided by the Customs Union. Because of the legal status of Brexit, the official talks have not started yet. We know that there is a positive dialogue between the sides. We are hoping that we are close to an agreement based on the win-win principle,” he said.

Okyay added that efforts to sign a deal that will go into effect following Brexit's finalization are ongoing.

“The Working Group officials say that the planned trade deal is an intermediary step to strengthen and deepen relations,” he said.

The economic and political ties between Turkey and the U.K. have particularly gained ground in the last decade. Both countries have been enjoying well-established relations based on their NATO membership, mutual economic interests and shared security concerns.

Amid the coronavirus pandemic, Turkey stepped in to donate 250,000 items of personal protective equipment (PPE), including 50,000 N95 masks, 100,000 surgical masks and 100,000 protective suits to the U.K. in April, followed by more deliveries which were welcomed by British authorities.

The U.K. is Turkey’s second-largest trading partner after Germany. It is also among the 17 countries with which Turkey has increased its exports in the last year in five priority sectors: machinery, automotive, electronics, chemicals and food. Turkey's top exports to the U.K. are electrical machinery and devices.

London continues to work closely with Ankara to further their discussions to ensure that a strong trading relationship continues at the end of the Brexit transition period on Dec. 31.