Turkey outpaces peers as economy grows 4.5% in Q1 ahead of onset of COVID-19 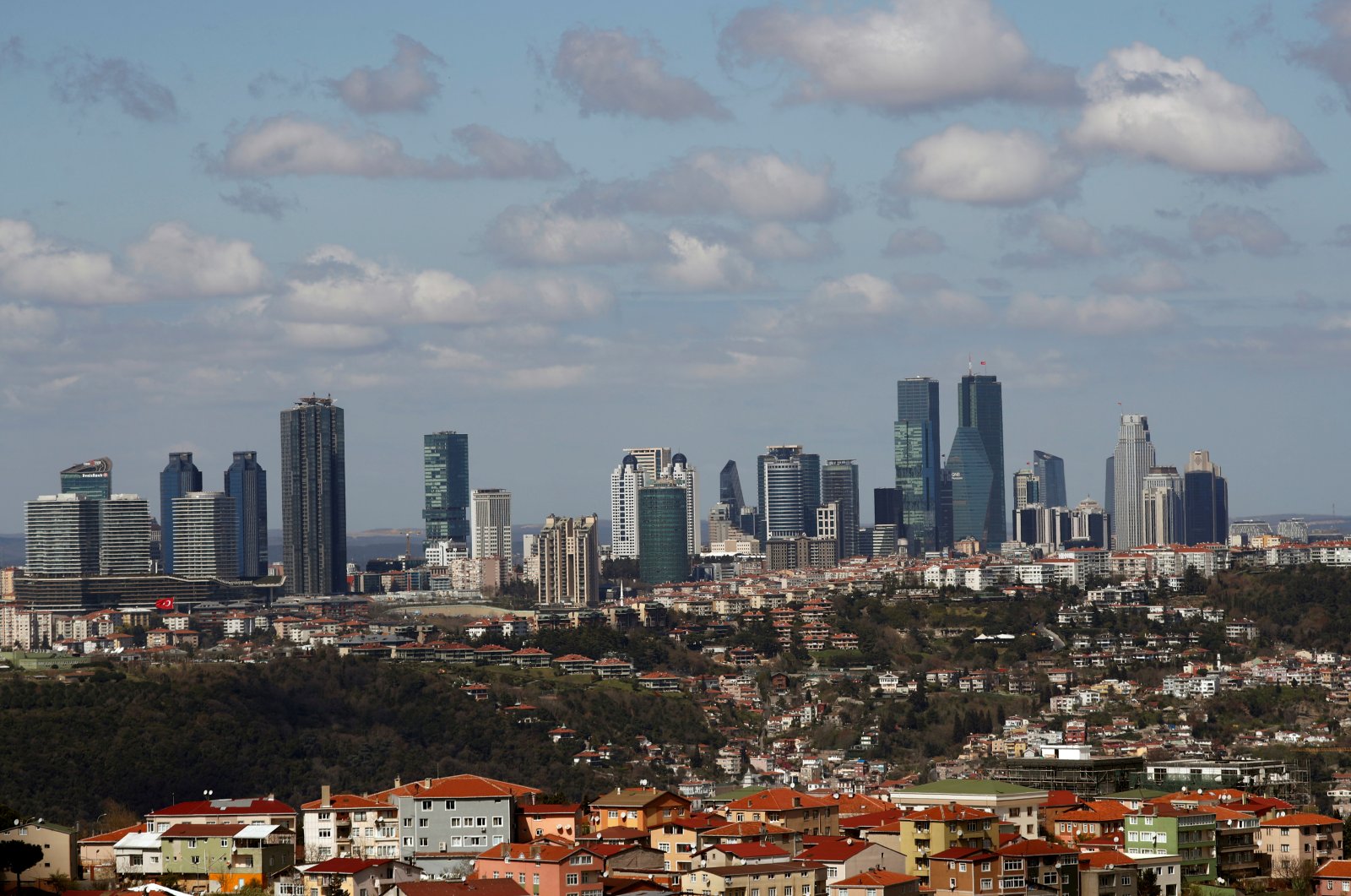 Skyscrapers are seen in the business and financial district of Levent, which comprises of leading banks' and companies' headquarters, Istanbul, Turkey, March 29, 2019. (Reuters Photo)
by DAILY SABAH May 29, 2020 11:04 am

Although analysts say the fallout from the pandemic could result in a downturn for Turkey through midyear, strong growth seen in January and February could soften the hit

Turkey's economy posted one of the fastest expansion rates among its peers in the first quarter of 2020, propelled by a surge in consumption that occurred just before a lockdown to stem the spread of the coronavirus pandemic was put in place.

The country's gross domestic product (GDP) grew 4.5% year-on-year in the January-March period, the Turkish Statistical Institute (TurkStat) announced Friday, after the economy showed a growth rate of 6% in the last quarter and nearly 1% in 2019 as a whole.

"The Turkish economy has grown 4.5% in the first quarter of the year, showing positive growth compared with world examples," Treasury and Finance Minister Berat Albayrak said, evaluating the data. "We will proceed more cautiously in the second quarter where we will feel the effects of the pandemic and hopefully witness a strong recovery period in the following periods," Albayrak said on his Twitter account.

The data demonstrated that the Turkish economy managed to remain less affected by the pandemic, which emerged in China last December and has so far infected over 5.8 million people worldwide and claimed more than 360,000 lives, compared with other big economies, while its growth data came in below analysts' expectations.

A median of 24 forecasts in one Bloomberg survey predicted a 4.9% increase, while a Reuters poll of 14 economists showed an expectancy of 5.4% growth. An Anadolu Agency (AA) survey, meanwhile, forecasted an average of 5.2% growth year-on-year.

The GDP at current prices surged by 16.2% from a year earlier to TL 1.07 trillion ($176.1 billion) in the January-March period, according to the data.

Turkey will be one of the countries least affected by the outbreak in terms of employment and growth, Albayrak said Wednesday, stressing the nation would end 2020 with positive economic growth despite negative forecasts due to the pandemic.

“Despite this crisis, instead of contracting 5% to 10%, God willing, we will see positive growth at the end of this year,” the minister said.

Although analysts have said the fallout from the pandemic would bring a downturn in Turkey through midyear, they have indicated the strong growth in January and February could soften the hit.

The strong performance in the first quarter shows positive growth in Turkey is still possible this year, according to Haluk Bürümcekçi, founder of Istanbul -based Bürümcekçi Consulting.

“The outlook for the rest of the year depends on how long the sudden slowdown in the economy following the COVID-19 outbreak will last,” he was cited as saying by Bloomberg. Bürümcekçi noted that signs showed the economy might rebound in the third quarter following a very steep contraction during the current period, should the fight against the outbreak succeed.

A measurement of services recorded the highest growth rate at 12.1% year-on-year, followed by information and communication with 10.7% and industry with 6.2%. The value-added increased by 3% in the agricultural sector. The services sector's value-added activities in terms of wholesale and retail, transport, storage, accommodation and food services went up 3.4% on a yearly basis. TurkStat said exports had declined by 1% on an annual basis, while imports had jumped 22.1%.

Jason Tuvey, a senior emerging markets economist at Capital Economics, said Turkey had succeeded in posting growth in the first quarter thanks to strong consumption rates in January and February. The growth was supported by domestic demand, Tuvey told Anadolu Agency (AA), also pointing to the increase in household consumption.

Erol Gürcan, an economist at Gedik Investment, echoed the view that the main driver of year-on-year growth had been domestic consumption (household and public expenditures), whereas the investments and net exports handed negative contributions.

The negative impact of the virus was limited on the data as the first COVID-19 case was confirmed in Turkey in mid-March, he told AA, adding that leading indicators for the second quarter signal a significant slowdown in economic activity.

"Although high-frequency data during the loosening in social distancing measurements start to provide some recovery signs, we should state that these kinds of signs could be meaningful if they are sustained," he stressed.

The economy was expected to grow 5% in 2020 before the onset of the outbreak, as laid out in the country's new economic program announced last September.

Turkey rebounded strongly in the fourth quarter of 2019 after three weak quarters, growing 6% year-on-year and nearly 1% the year as a whole. In the first two quarters, it had contracted 2.3% and 1.6%, respectively, on an annual basis. In 2018, the economy posted an annual growth rate of 2.8%, narrowing in the last quarter.

In an effort to slow the spread of the coronavirus, Turkey in March closed its borders, halted flights and imposed weekend lockdowns, all of which led to declines in trade, tourism and domestic demand. Some factories also temporarily halted. However, the restrictions imposed in the country were less severe than in some other countries, including hard-hit Italy and Spain, and were introduced within the first days after the first case was confirmed.

The virus has as of Thursday claimed nearly 4,500 lives in Turkey, with more than 160,000 infections. However, the country has less than 40,000 active cases as more than 70% of the patients have recovered.

Amid a drop in daily COVID-19 deaths and infections in the past weeks, Ankara has as of last month started gradually lifting the restrictions and is set to take its biggest step toward returning life to normal as President Recep Tayyip Erdoğan Thursday announced the country will lift restrictions on intercity travel and allow restaurants, cafes, parks and sports facilities to reopen from June 1. Museums and beaches will open from then, and civil servants will also begin regular work.

Among other easing measures, intercity trains started operating on Thursday after a two-month hiatus, while mosques began allowing mass prayers as of Friday.

In contrast to Turkey's performance in the January-March period, the 19-nation eurozone economy shrank by a record 3.8% in the first quarter, the lowest reading since records began in 1995 and sharper than the plunge in the midst of the global financial crisis in the first quarter of 2009 as business activity in the region was frozen by shutdowns aimed at preventing the spread of the coronavirus.

The eurozone economy is likely to shrink between 8% and 12% this year after being hit by the full force of the pandemic in April, European Central Bank (ECB) President Christine Lagarde said on Wednesday. The ECB earlier said the economy could shrink by between 5% and 12%, but speaking in a youth dialogue, Lagarde said that the "mild" scenario is already outdated and the actual outcome would be between the "medium and "severe" scenarios.

The region’s second-largest economy France entered technical recession as it posted two consecutive quarters of economic contraction, having shrunk 5.8% year-on-year in the first three months of 2020, the sharpest decline since records began in 1949 after it dropped 0.1% in the final quarter of 2019.

The Spanish economy contracted 5.2% in the January-March period in what turned to be worse than what analysts had forecast.

In what appeared to be fairing better than neighboring countries, Europe's largest economy Germany also plunged into a recession after it shrank by 2.2% in the first quarter, suffering its widest quarterly contraction since the 2009 financial crisis and second-biggest since German reunification in 1990. It followed a 0.1% contraction in the last three months of 2019.

Italy’s economy shrank 5.3% in the first quarter, its national statistics bureau ISTAT said on Friday, the steepest drop in the gross domestic product since the current series began in 1995. ISTAT sharply cut its preliminary estimate of a 4.7% GDP fall issued last month, as the economy slumped due to a nationwide lockdown to try to curb one of the world’s worst outbreaks of the coronavirus.

Shrinking at an even faster pace than initially estimated in the first three months, the U.S.' GDP contracted at a 5% annualized rate in the January and March period, the deepest drop in output since the 2007-09 Great Recession and a bigger decline than the 4.8% drop first estimated a month ago.

The British economy shrank 2% in the three-month period, the biggest quarterly decline since the global financial crisis of 2008, with output down by 5.8% in March alone.