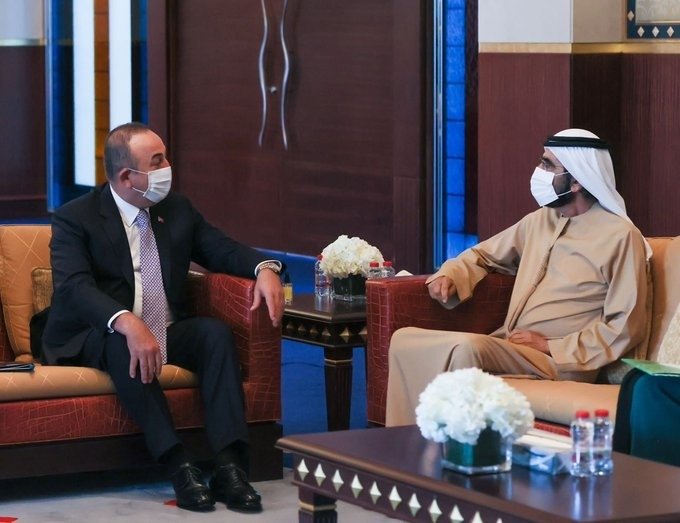 The minister made the related statement via his Twitter account as he shared photos from his official visit where he was received by UAE Vice President Sheikh Mohammed bin Rashid Al Maktoum, who is also the ruler of the Emirate of Dubai.

Foreign Ministry sources said that the two discussed regional developments during the meeting.

Çavuşoğlu arrived in UAE on Monday to discuss bilateral relations and meet Turkish businesspeople in Dubai, the region's trade and tourism hub.

The visit comes after Turkey and the UAE signed accords and deals at talks in Ankara last month, in a move President Recep Tayyip Erdoğan said would herald a "new era" in relations.

The Dubai Media Office earlier said Sheikh Mohammed met Çavuşoğlu to discuss "strengthening cooperation between the UAE and Turkey and developing frameworks to collaborate on all areas of common interest."

On Tuesday, Çavuşoğlu met Turkish businesspeople in Dubai, who he said "play a big role in developing commercial ties with the UAE." He said after meeting Sheikh Mohammed that Turkey and the UAE "will further develop our economic and commercial relations."

Turkey also sided with Qatar in a Gulf dispute, putting it at odds with the UAE, Saudi Arabia and Egypt, while Turkish support last year helped Libya’s United Nations-backed government in Tripoli drive back UAE-supported forces trying to seize the capital.

Turkey is also engaged in an effort to mend frayed ties with regional powers, including Egypt and Saudi Arabia.