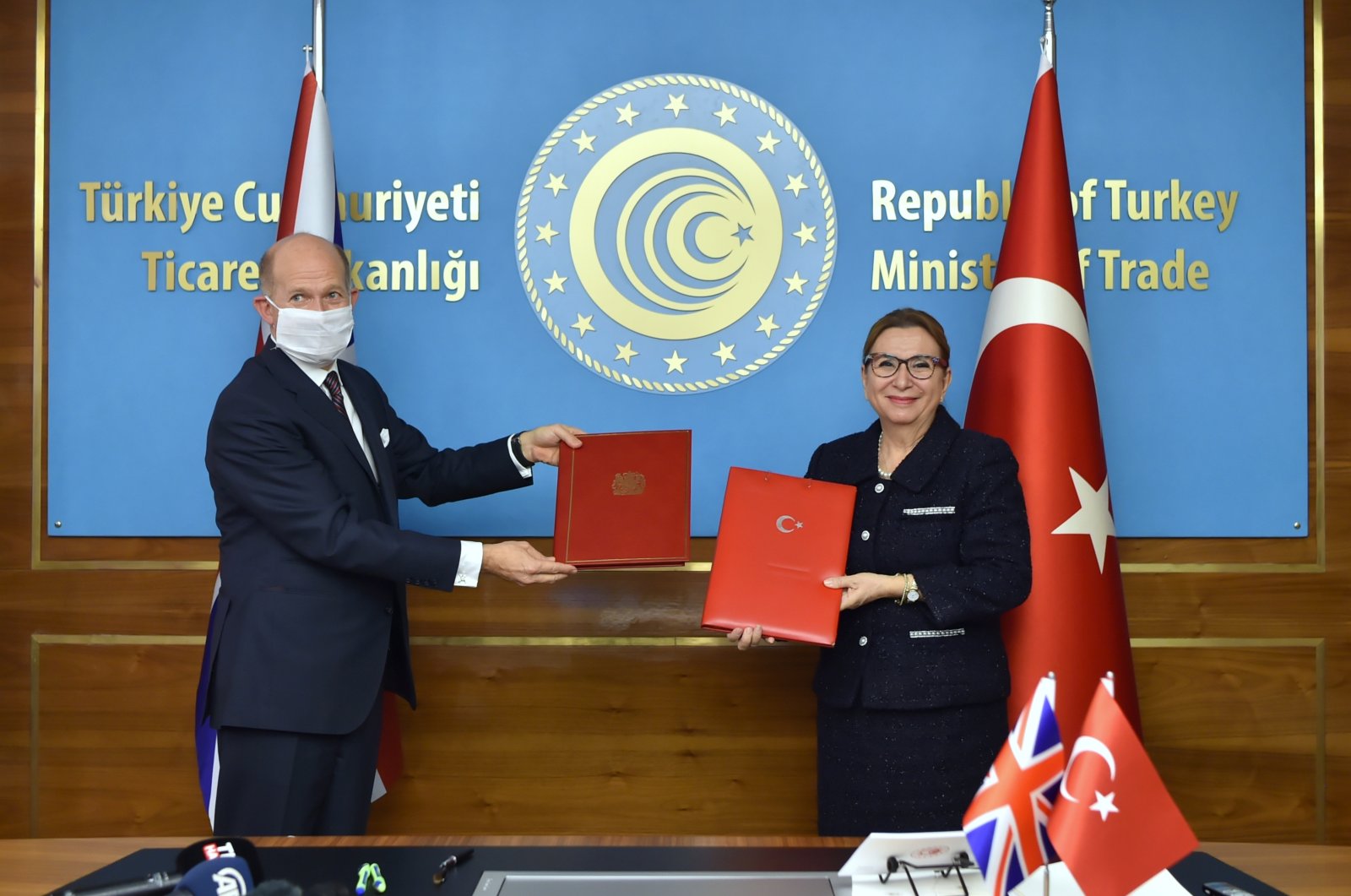 Trade Minister Ruhsar Pekcan (R) and the U.K.'s Ambassador to Ankara Dominick Chilcott are seen on the sidelines of the signing ceremony of the Turkey-U.K. free trade agreement in the capital Ankara, Turkey, Dec. 29, 2020. (AA Photo)
by DAILY SABAH Dec 29, 2020 3:30 pm
RECOMMENDED

In a major milestone, Turkey and the United Kingdom Tuesday signed a free trade deal that will become effective after Thursday, when Britain formally leaves the European Union, to keep up the existing flow of goods.

“This is a historic day for Turkey-U.K. relations,” Turkish Trade Minister Rushar Pekcan said just before she signed the agreement with her British counterpart in a televised videoconference call.

“The agreement is based on a common understanding. Our governments will maintain and develop the framework of our existing trade and economic relations.”

“The deal will be the biggest guarantee for the development of our future bilateral trade,” Pekcan said.

The pact will ensure stronger trade between Turkey and the U.K. in the days to come, she underlined, adding that it leaves no uncertainty in the trade structure between the two countries.

“We are taking the first step toward further deepening our ties while maintaining 25-year gains from the Customs Union,” said Pekcan.

“With the new deal, Turkey and the U.K. are pleased to meet business people’s expectations and to keep our promises,” she added.

Although the details of the agreement were not immediately disclosed, the U.K. trade ministry said Sunday the deal would replicate existing trading terms.

British State Secretary for International Trade Liz Truss said she was hopeful a bespoke deal between the countries could be struck soon.

In the absence of a deal, about 75% of Turkish exports to the U.K. would have been subject to tariffs, causing losses of some $2.4 billion (TL 17.6 billion), but the deal eliminates this risk, said Pekcan.

“We reached a tariff-free agreement, as planned, which includes all industrial and agricultural goods,” she said.

Stating that the trade volume between the two countries hit $15.1 billion in January-November, Pekcan said in 2019, Turkey’s exports to the U.K. stood at $11.3 billion, while imports totaled $5.6 billion.

Britain said the agreement was the fifth-biggest trade deal the trade ministry had negotiated after agreements with Japan, Canada, Switzerland and Norway.

Addressing the ceremony, Truss said the pact lays the groundwork for a more ambitious U.K.-Turkey trade relationship in the days to come.

“The agreement is part of our plan to put the U.K. at the center of a network of modern agreements with dynamic economies,” she noted, saying there is greater trade potential in the areas of finance and biotechnology.

"We are preparing for a much more ambitious extended agreement, which will include services in particular. In this sense, I believe that as two trading countries, from products, vehicles to other sectors, we can gain great momentum in the field of services and technology trade much faster,” the minister noted.

The relations have a lot of potential, given Turkey's growing dynamism going into the future and that the U.K. is a global provider of services, Truss said.

“In this context, from the point of view of trade in goods, it is important both in the field of iron and steel and in the field of automotive, as well as in the development of supply chains.”

For U.K. consumers, it will be possible to buy quality products, including white goods produced in Turkey, Truss said. “In addition, agricultural products will also contribute greatly to consumers getting decent products at decent prices.”

Pekcan stressed the United Kingdom was among the leading markets for many Turkish sectors, especially automotive, television, home appliances and clothing.

The U.K. is a valuable partner for Turkey in terms of production and supply chains as well as investments, the minister added.

The U.K.’s investments in Turkey are around $11.6 billion, Pekcan said.

“I hope the deal will be reflected positively in bilateral investments,” she underlined.

Pekcan also said Turkey is eager to expand the pact in areas such as investments and services.

“We will discuss how we can improve the conditions for entering the agricultural market as well,” she added.

The representatives of the automotive industry, which constitutes around $3 billion of the bilateral trade, praised the deal.

“Brexit was a process that could have devastating effects on both countries’ automotive industries. The automotive sector accounts for 16% of the total trade volume between the U.K. and Turkey,” said Haydar Yenigün, the head of Turkey’s Automotive Manufacturers Association (OSD).

“The deal is a New Year’s gift for our industry. We would like to thank all the officials and industry representatives in both our country and the United Kingdom who have contributed to this process, especially our Trade Ministry,” Yenigün said in a statement.

Truss said that in the last two years, in the countdown to Brexit, the U.K. reached agreements with 62 countries and the EU to cover 885 billion pounds ($1.20 trillion) of U.K. trade.

“We are not only accelerating trade, but also aiming to grow. Today we open a new page in the cooperation between Turkey and the U.K.,” she added.

In a statement following the signing, the U.K. government said the deal covers trade worth more than 18 billion pounds.

“Both countries have also committed to working towards a more ambitious free trade agreement in the future, which will go further than the current deal,” it said.

Vital U.K.-Turkey supply chains will also be protected for automotive manufacturers, such as Ford, which employs 7,500 people in the U.K., it noted.

Also commenting on the deal, Stuart Rowley, the president of Ford Europe, said: “Ford welcomes the announcement today of a trade agreement between the two countries, and the speed with which it has been concluded underscores its importance to the economic prosperity of both countries.”

“Given that Ford and [Ford-Turkish Koç Holding co-owned] Ford Otosan business constitutes more than 10% of the total trade volume between the U.K. and Turkey, this trade agreement is extremely significant for us and will help to secure jobs in both countries,” Rowley noted.

Andy Burwell, director for international trade and investment at the Confederation of British Industry (CBI), also underlined that the historic pact will bolster key supply chains across many industries after a year of pandemic disruption.

The Brexit transition period ends on Jan. 1, when the U.K. leaves the EU's trading arrangements.

In a major breakthrough, it clinched a narrow trade deal with the bloc, its biggest trading partner, last week after 10 months of intense negotiations.

The deal will kick off this week when the acrimonious Brexit divorce process finally comes to an end.