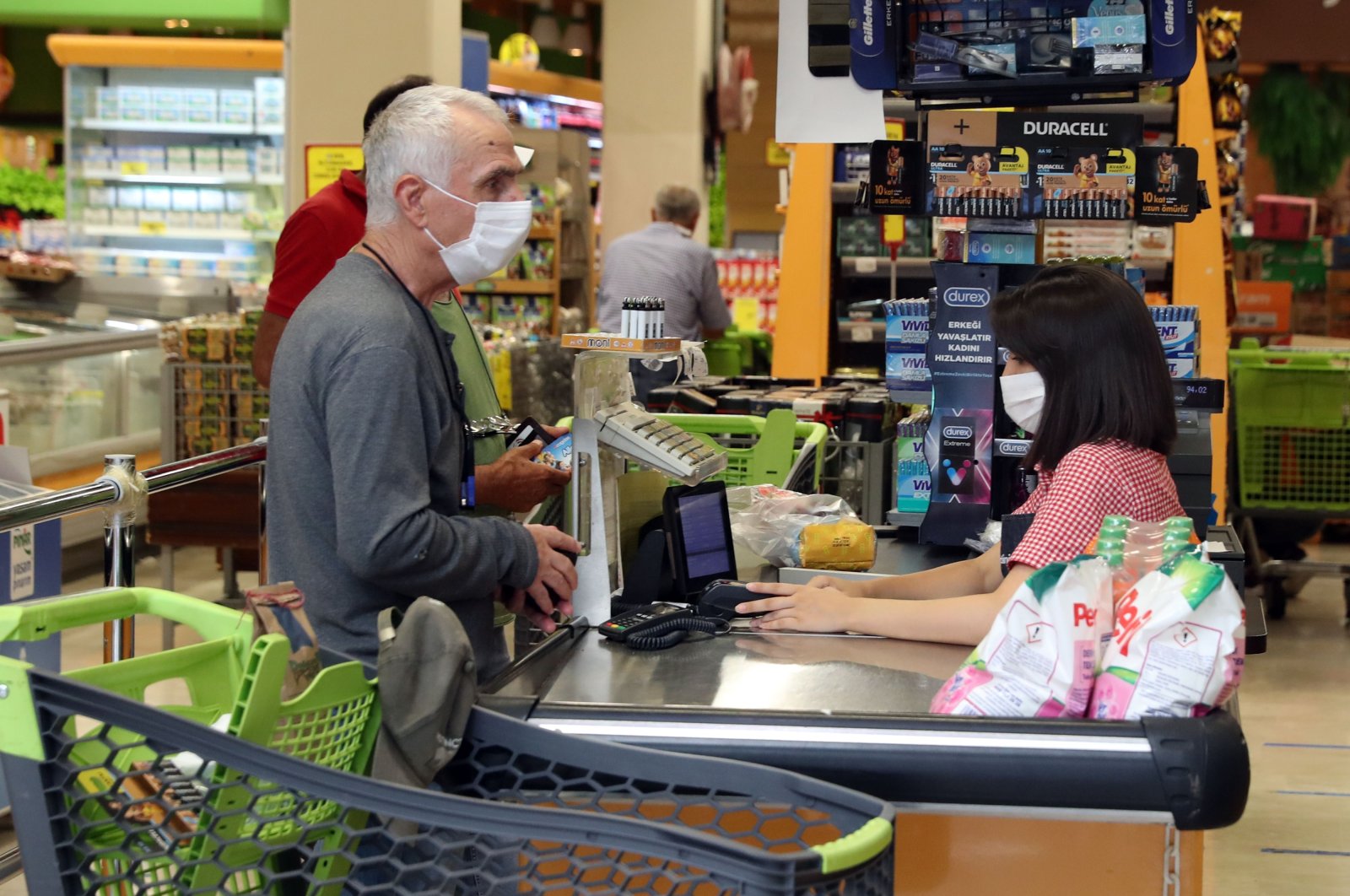 Supermarket cashiers and clients wear protective face masks as new measures are enforced to fight against the coronavirus in Ankara on Aug. 6, 2020. (AFP Photo)
by DAILY SABAH WITH AGENCIES Sep 03, 2020 10:07 am
Edited By Alen Lepan
RECOMMENDED

Turkey’s inflation came in a bit lower than expected at 11.77% year-on-year in August, the country’s national statistical body announced on Thursday.

Last month, annual inflation went up 0.01 percentage points from 11.76% in July, according to the Turkish Statistical Institute (TurkStat).

A Reuters poll predicted annual inflation of 11.91% in the month, while an Anadolu Agency (AA) panel of 18 economists projected the inflation rate will hit 11.88%.

The highest price increase on a yearly basis was recorded in miscellaneous goods and services with 26.99% in August, the data showed.

Prices of health-related goods and services followed at 14.68% and food and nonalcoholic beverages at 13.51%.

Month-on-month, consumer prices rose 0.86% in August, the data showed, compared with the Reuters poll and AA survey forecast of nearly 1%.

The largest consumer price rises in August were in the various good and services component at 5.09%, the data showed. Prices related to transportation, restaurants and hotels rose, while clothing and shoe prices dropped 2.11%.

According to the official figures, the 12-month average hike in consumer prices was 11.27% as of this August.

The Central Bank of the Republic of Turkey (CBRT) in July raised its year-end inflation forecast to 8.9% from 7.4%. It said the 1.5 percentage-point increase was driven by an upward revision in oil prices and food inflation projections.

The bank ended an easing cycle in June and has since held its key rate at 8.25% but has used backdoor steps to tighten credit and support the Turkish lira.

The government's year-end inflation target is 8.5% for 2020, as laid out in its new economic program, announced last September.

On Sunday, Turkey increased its special consumption tax on mid-range and expensive cars, a move which economists said could lift year-end inflation by up to 1%.

The producer price index rose 2.35% month-on-month in August for an annual rise of 11.53%, the data showed.

“Despite the favorable base year impact, higher energy prices as well as the FX pass-through impact, especially on core good prices, will carry the annual inflation close to 12%," Özlem Bayraktar Göksen, chief economist at Tacirler Yatırım, said before the data release.

“VAT (value-added tax) cuts on some services (especially on hotel and restaurant prices) are considered to have a downward effect ... However, the prevailing depreciation in the lira would increase the pressure on the core goods prices in August.”

The country in late July announced steep VAT cuts for services and a withholding tax reduction for tradesmen to help the economy weather the coronavirus pandemic.

It cut VAT in accommodation and catering services and cultural activities such as cinema, theater and museum entrance fees from 8% to 1%. The VAT in passenger transportation, wedding organizations, residential maintenance and repair, dry cleaning and tradesmen services such as tailoring was slashed from 18% to 8%, he noted.