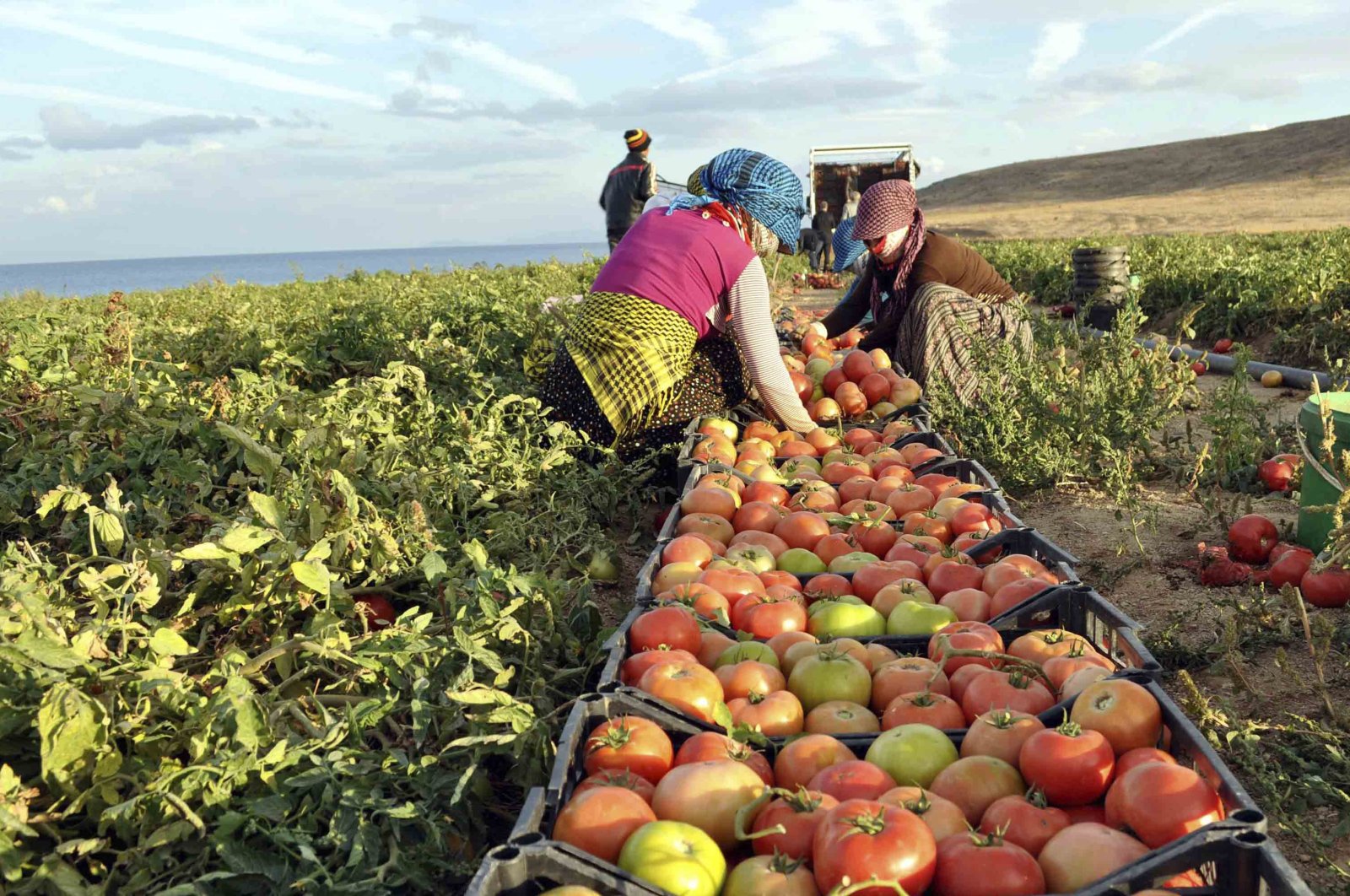 In this undated photo, harvesters pick tomatoes at a farm in the Tatvan district of Bitlis province, Turkey. (AA Photo)
by Daily Sabah with Agencies Mar 31, 2020 1:08 pm
RECOMMENDED

As the agricultural high season begins in Turkey, migrant farmworkers are voicing their health and safety concerns about the coronavirus outbreak. They are also worried about social distancing as laborers begin to work side by side to plant and harvest.

Every year thousands of agricultural workers from the east and southeast, together with their families, migrate to the agricultural regions of the country for the plantation, irrigation, hoeing and harvesting seasons, which usually start in April and last for up to nine months. Workers and their families often experience challenges while moving around the country in pursuit of jobs, from using unsafe and overcrowded vehicles for their transport to having limited access to health care services. The biggest challenge facing workers this year, however, is the spread of coronavirus and how they will continue traveling during the outbreak.

Suphi Hatipoğlu, the head of Şanlıurfa Seasonal Agricultural Workers’ Association, said Tuesday that some families are reconsidering traveling for work due to concerns related to hygiene conditions at the farms.

He added that many families he represents are already on the move despite the concerns. “People have to go. Sugar beet hoeing in Konya and tomato planting in Ereğli have started,” Hatipoğlu said, noting that most agriculture seasonal activities need to begin by April 15.

Hatipoğlu said workers are demanding that governorates ensure workers' safety against the coronavirus during travel and accommodation throughout the season.

“We want hygienic workplace conditions such as cleaning facilities, provision of masks, gloves and disinfectants. Every year, we had demanded adequate toilet and shower facilities but this year such demands gained critical importance due to the pandemic,” he said.

Turkey’s Ministry of Agriculture and Forestry announced plans this week to ensure the safety and well-being of seasonal workers against COVID-19, including additional hygiene and personal protection products. They include measures for ensuring safety during transportation to agricultural areas and accommodation at the farms.

Hatipoğlu said the ministry’s instructions were a positive step, but pointed out that these measures would be meaningful only if practiced at the local level. “The government cannot solve matters that are under the employer's responsibility. The Chamber of Agriculture also needs to urge employers to follow these steps,” he said.

He added that it was not possible to follow the new rule of keeping at least 1 meter of distance from each other while harvesting certain products. “The distance between sugar beet lines is 45 centimeters, so people have to work close to each other," he said.

While agricultural workers are concerned about inadequate health protection during the outbreak, tourism workers, a large portion of them seasonal, face unemployment in the summer months.

Some 2.5 million workers will not begin work in the next couple of months, as the tourism sector – which accounts for about 12% of the economy – delays its spring opening, according to the Revolutionary Tourism Workers' Union.

Another tourism group estimated that some 550,000 hotel workers are categorized as seasonal, which means they will miss out on government packages that compensates employees' lost wages.

Osman Ayık, head of the Tourism Sector Council under Turkey's Union of Chambers and Commodity Exchanges, said capital on hand at hotels will only last up to six months, so even current staff levels will be hard to maintain.

President Recep Tayyip Erdoğan on March 18 announced a nearly $16 billion support package and unlocked stop-gap payments for those whose work hours fall by at least a third. Ankara also postponed loan payments and lowered taxes for affected sectors. Erdoğan said "the economy, employment, commerce and production" would be the focus.