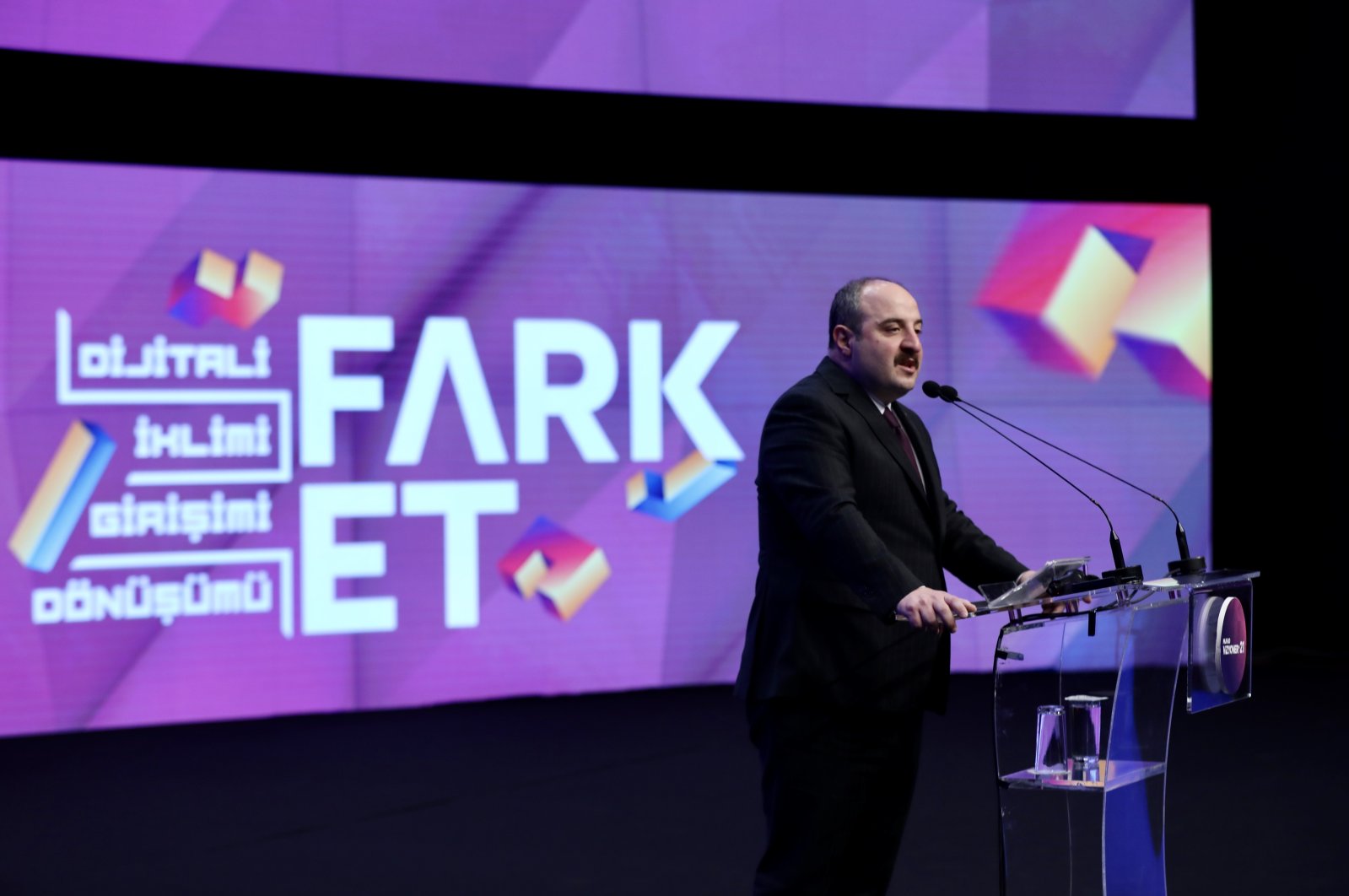 Turkey became one of the rare countries that grew by rapidly adapting to the pandemic conditions, Technology and Infrastructure Minister Mustafa Varank said Wednesday, as he pledged that the country will continue to strengthen in all areas, specifically benefitting from technological transformation.

He was speaking at the Independent Industrialists and Businessmen Association (MÜSIAD) conference held in Istanbul.

While the theme of this year's summit, which was held for the fourth time, was "to notice," the issues of green transformation and climate change took center stage.

This year, unlike the previous summits, the startup exchange scene "startalks" and nonfungible tokens (NFTs) for digital art exhibitions were discussed in the event held in Haliç Congress Center.

Stating no exchange rate is stronger than the Turkish economy, Varank said, "We have all seen the developments after the new economic manifesto announced by President Recep Tayyip Erdoğan."

“Our main priority is to increase predictability by ensuring stability in exchange rates and prices. We will become more resistant to external shocks. We will develop domestic production. Together, we will achieve a brand new growth story thanks to the national technology move. The rapidly increasing digitalization has opened a new window for the whole world in economic terms,” Varank said.

'Digital transformation is not just about buying smart machines'

Expressing that they aim to create nearly $20 billion in additional added value in the manufacturing industry alone, Varank said, “The digital transformation process is not just about buying a smart machine and putting it on the production line. A holistic approach is required, such as creating and producing a transformation strategy and understanding the needs.”

Stating that they provide financial and moral support to businesses to design their digital transformation processes, Varank said, “We are taking steps to ease the investment burden of our small and medium-sized enterprises (SMEs).”

Expressing that technology-based entrepreneurship activities are of vital importance and one of the top priorities of the ministry, Varank also stated that there has been a more than tenfold increase in venture capital investments made in startups this year.

"Let's further enlarge the venture capital funds and pave the way for young people. Let's focus on the future and believe in Turkey," he added.

'Global warming is affecting our lives'

In his speech at the event, the newly elected chairperson of the MÜSIAD, Mahmut Asmalı, said: “The innovation in information technologies has brought us one step closer to being digital people by introducing concepts such as e-government and e-pulse into our lives. The global e-commerce volume is $4.2 trillion this year, and we want Turkey to have a share here," he said.

“Climates are changing, global warming is affecting our lives. MÜSIAD believes that every living creature has the right to a quality and fair life and that this is more important than the interests of a few countries. MÜSIAD provides support on the condition that the global climate change policy is applied equally to all countries. We will be a pioneer in the transformation to play a role in Turkey's climate policy,” he said.

Explaining the new climate manifesto of the business association, Asmalı said that climate change and transformation to green energies will be supported in line with this manifesto. Asmalı also said that in addition to the studies for the development of a new generation battery and gas technologies, the works designed for industrialists will be supported for the conversion of industrial waste into energy and energy saving.

Emphasizing the importance of Turkey's efficient use of diminishing water resources, Asmalı said that they support the zero-waste policy and that as MÜSIAD, they will move forward by evaluating companies and stocks in terms of carbon studies.

“In line with the increasing importance of climate diplomacy, all kinds of work abroad will be supported. We will also support efforts against the risk of millions of people being displaced and becoming climate refugees,” Asmalı said, adding that they will work to reduce global food waste by up to 30%.

Şekip Avdagiç, head of the Istanbul Chamber of Commerce (ITO), for his part, said that MÜSIAD tries to raise awareness by marking the most striking theme in the business world with every visionary meeting.

“This year's theme is 'to notice.' Our principle is to sense what is coming and change," Avdagiç said, pointing out that artificial intelligence (AI), big data, cyberattacks and a carbon-free world are important subjects for digital transformation.

“Many countries, including Turkey, struggled with fires this summer. The temperature rises by 0.15 degrees Celsius every 10 years, and in 2021 the temperatures have increased so much that there are only 2 degrees Celsius left before the world turns into a huge greenhouse," he said.

“If we do not reduce our carbon footprint, we will not be able to sell products to Europe. Firms that comply with the green agreement get different privileges to sell goods. The banks do not give funds to those who cannot meet their emission target, and they do not do business with them in international trade,” Avdagiç said, emphasizing that the cost of investing in fossil fuels will now be much higher.