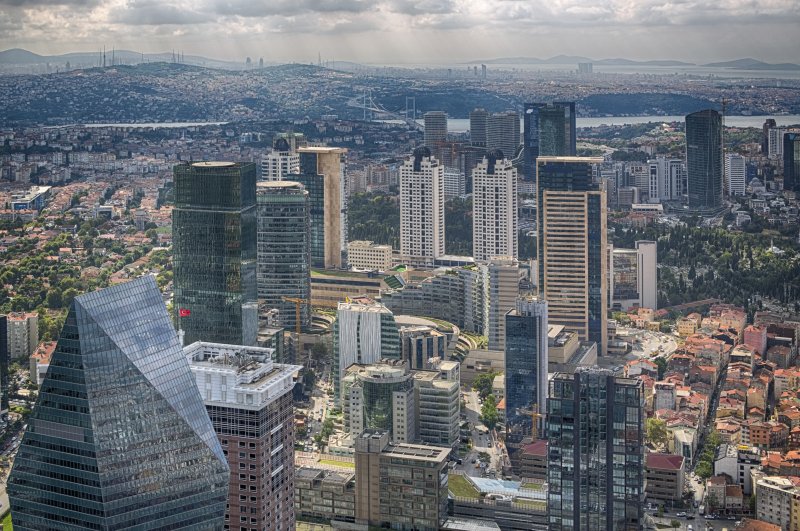 An aerial view of the Levent business district in Istanbul. (iStock Photo)
by Daily Sabah with Reuters Feb 24, 2020 6:03 pm
RECOMMENDED

Turkey’s economy grew 5% in the fourth quarter and expanded 0.6% in the year as a whole, above the government forecast, a Reuters poll showed Monday.

The major emerging market economy entered a promising era of growth in the third quarter of last year, taking a turn after three consecutive quarters of contraction.

The economy grew 0.9% year-on-year between July and September of 2019. In the first two quarters, the economy contracted 2.3% and 1.6%, respectively, on an annual basis.

In 2018, the economy posted an annual growth rate of 2.8%, narrowing in the last quarter.

In a Reuters poll of 16 economists, the median forecast was for 5% year-on-year growth in the fourth quarter.

Full-year growth was seen at 0.6%, just above the government's forecast of 0.5% announced in September.

Economist forecasts for fourth-quarter growth ranged between 4% and 6.1%, full-year growth forecasts range between 0.4% and 1%.

Haluk Bürümcekçi, of Bürümcekçi Consulting, told Reuters that while a decline in foreign demand had hit growth, consumption and retail sales were strong. "With the contribution of delayed domestic demand coming into play due to the fall in loan interest rates, we are seeing a large growth in the fourth quarter," he said.

Turkish economic growth has averaged around 5% over the last two decades. During a financially and economically turbulent period that kicked off in the second half of 2018 and stretched into the first half of 2019, the economy was battered by currency volatility, high inflation and high interest rates, resulting in tumbling domestic demand from consumers and investors.

The Central Bank of the Republic of Turkey (CBRT) responded by raising its policy rate to 24%, where it had stayed until last July. It has cut rates by 1,325 basis points since then in order to boost growth.

The Turkish Statistical Institute (TurkStat) will publish the Turkish economic growth data on March 2 at 0700 GMT.