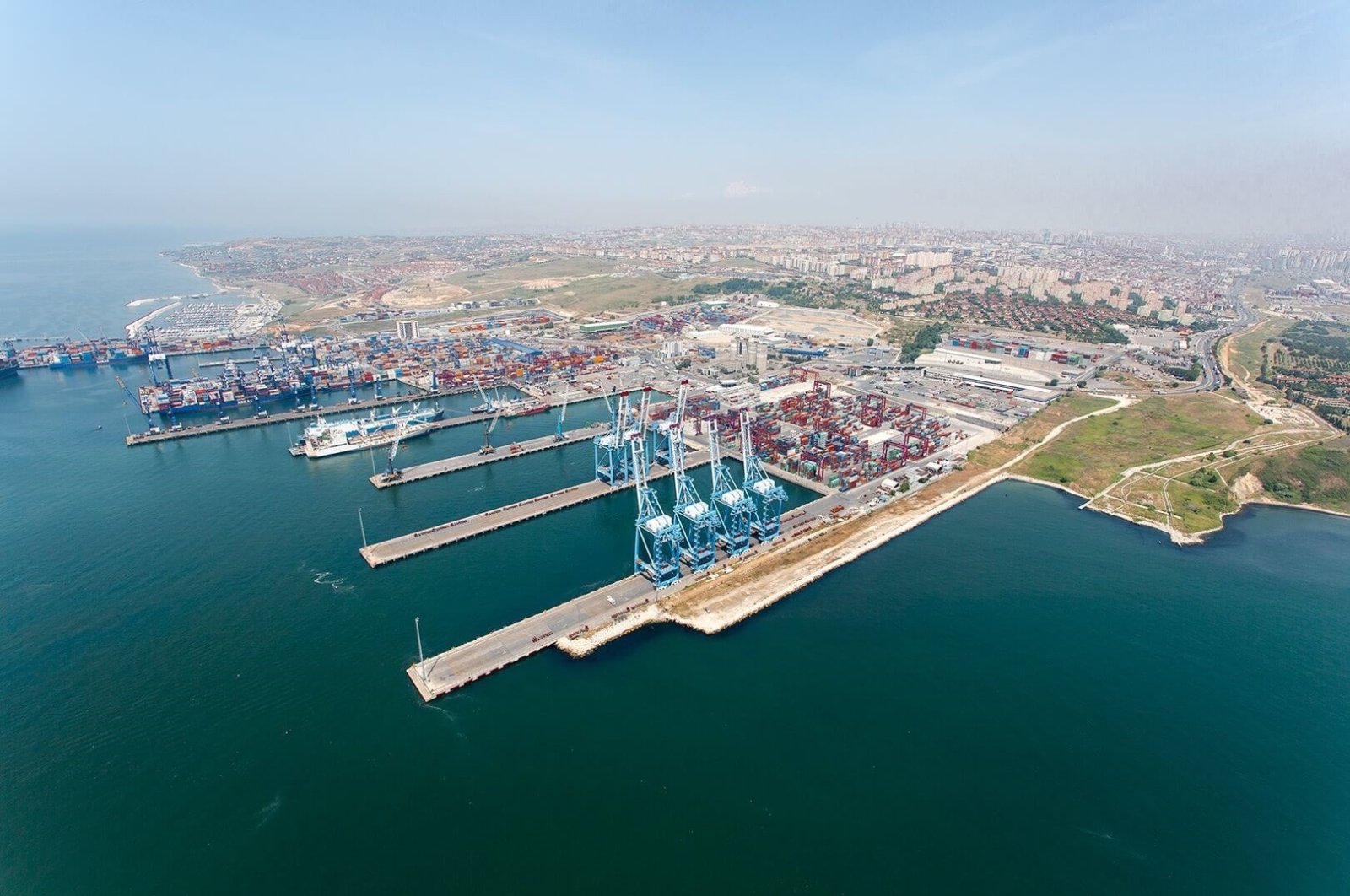 Containers and ships are seen at Kumport, one of Turkey's largest ports, in Istanbul. (Photo courtesy of Kumport)
by DAILY SABAH Nov 02, 2020 12:06 pm
RECOMMENDED

As trade continued its recovery from the fallout of the coronavirus pandemic, exports were up 5.6% year-on-year in the month, Pekcan said.

Imports, on the other hand, saw an 8.5% year-on-year increase to around $19.73 billion, according to the general trade system, data from the Trade Ministry showed. Around 87.8% of imports consisted of raw materials and investment goods, Pekcan said.

“We are entering a new period where exports are gaining strength every day and balance is achieved in the current account balance,” Treasury and Finance Minister Berat Albayrak said, evaluating the data.

"October exports are confirmation that Turkey will be among the fastest-recovering countries and that it will overcome the pandemic with the least possible damage," the minister stressed.

The exports-to-imports coverage ratio surged to 87.9% in the month, the highest level seen in 2020 so far, Pekcan said.

The export trend in October is an indicator that shows the country's exports will continue to rise, Pekcan asserted. "Turkey is maintaining its export capacity and will move forward with strong steps in line with our goals with new records," she added.

Exports were also up from a noteworthy $16 billion in September when foreign sales also surged by 4.8% year-on-year and 28.5% month-on-month.

Gold, she said, is an investment tool with a capital value as well as a commodity trading and recalled that the U.K., one of the largest gold trading countries, has been sharing foreign trade data excluding gold since last February.

In October, $2 billion of overall imports were gold imports, while imports, excluding gold, were $17.8 billion last month, she stated.

The ready-to-wear industry came in second with approximately $1.86 billion, up $305 million year-on-year. Chemicals came in third with $1.72 billion, the data showed.

The jewelry sector achieved the strongest performance in the month, Gülle said, as it saw a 161% year-on-year increase in exports to $693 million. Among others, cement, glass, ceramics and soil products posted a 21% increase to $357 million.

The European Union remained the country’s top market in the month as exports to the bloc surged 4.1% to $7.23 billion. The bloc held 41.7% in the country’s overall exports.

Exports to the U.K. posted a noteworthy 52.6% year-on-year increase last month, hitting nearly $1.5 billion, Pekcan said. She added that exports to the country saw a 12.8% rise in the last five months.

Germany was the country’s top market in October as well as the first 10-month period with $1.62 billion and $12.9 billion, respectively, according to the data.

In October, it was followed by the U.K. with $1.5 billion in October and $8.2 billion in the January-October period.

Iraq came in third last month with $966 million. Sales to the country in the first 10 months amounted to some $6.4 billion, coming in fourth after the U.S., which was Turkey’s third top export market from January through October with $7.2 billion

TIM chairman added that October exports to Far East countries were up 4% to $1.3 billion, while sales to North America surged 11.4% to $1.05 billion.

The trade minister also said the country has held virtual trade delegations with 40 countries so far and that over 5,000 bilateral meetings were held.

Pekcan stressed the virtual trade delegations made a positive contribution to the protection of the trade volume and its development.

“Despite the pandemic, we held Joint Economic Commission (KEK) and Joint Economic and Trade Committee (JETCO) meetings with nine countries. At the bilateral level, we conducted 147 meetings, some of which were videoconferences and some with ministers and deputy ministers,” Pekcan said.

“We held 12 meetings on customs cooperation, including with Bulgaria, Greece, Georgia and Iran, our border neighbors,” she added.

Pekcan said that by the end of this year, they envision holding joint commission and committee meetings at the official level with China, Russia, Italy, Bulgaria, Hungary, Belgium, Finland, Azerbaijan, Senegal and Ethiopia.