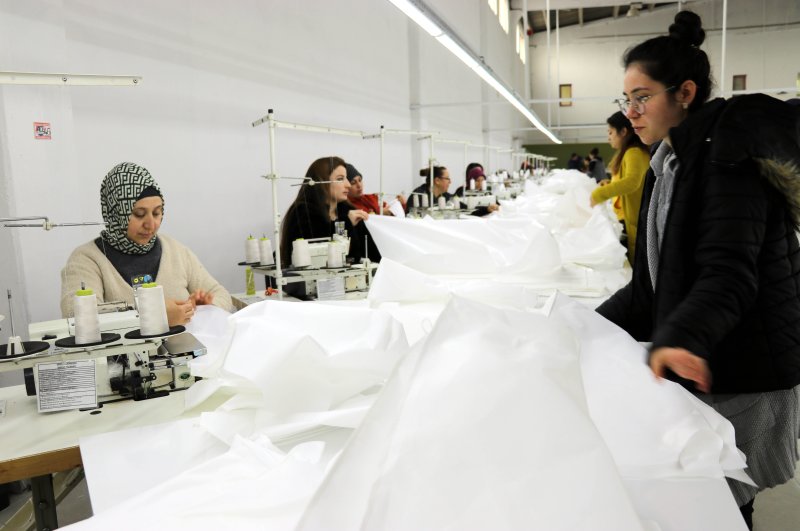 A local factory in northern Turkey has halted normal production to make antibacterial suits to aid in China’s fight against the coronavirus.

Şen Tekstil in Amasya started mass producing the suits for sale earlier this month after China issued a call for help in meeting the rising demand in the country. The manufacturer normally concentrates on women’s clothing, yet in light of the new outbreak has increased production capacity and hired more workers after receiving a staggering amount of orders from China.

"Since the switch, we have received orders for more than a million units. We are producing around 5,000 a day right now and they are being sent to China on cargo planes,” the factory owner, Şener Şen, told Anadolu Agency (AA) on Saturday.

The protective antibacterial suits, which are completely airtight and disposable, are essential for medical personnel treating COVID-19 patients.

The fatal illness that began in China shows no sign of slowing down as more new cases continue to pop up in countries across around the world despite authorities' efforts to stop it from spreading. The list of countries hit by the virus has climbed to nearly 60. The viral outbreak has infected more than 86,000 people worldwide, with deaths topping 2,900.

The World Health Organization (WHO), which last month declared the outbreak an international health emergency, raised the global risk level from "high" to "very high" on Friday.

In the meantime, Turkish textile and garment manufacturers are scrambling to meet booming orders amid the outbreak as the sector is already running at 85% capacity.

"We expect a 10% rise in our clothing exports. Most probably the 1-2% business loss in the Chinese garment sector will be replaced in Turkey," the president of the Turkish Clothing Manufacturers' Association (TGSD) told AA.

Hadi Karasu said the Turkish clothing sector's exports stood at $17.7 billion last year, while the figure for China came to $173 billion. The president, however, noted that the sector did not have the capacity to receive more orders.

"Capacity increase is a must. Plus, we have to overhaul our technology and complete our digital transformation" he added. Karasu said the Turkish textile sector did not seek to make a profit out of the coronavirus and was ready to cooperate with its Chinese counterpart.

"We want the world to eliminate this disease as we don't see any advantage in it," he stressed. Karasu highlighted that the depreciation in the Turkish lira against other currencies made the country's exporters more competitive.

"European buyers have begun to question why they are going to China," he noted, adding that Turkey had the advantage of being able to deal with sharper deadlines compared with the Far East. He also said U.S. companies had already turned to Turkey because of the strain between the U.S and China.

"Turkey will be on the radar of U.S. sourcing firms in the coming 10 years," Karasu noted.

Some clothing exporters in Istanbul have seen a 40-50% surge in orders from European companies, according to sectoral sources, who asked not to be named.

Prominent Turkish brands, which mostly purchase from Far Eastern countries, have also started placing orders in Turkey due to concerns over customer perceptions around in goods made in China, the brands said, pointing to the breadth of Turkish capacity.