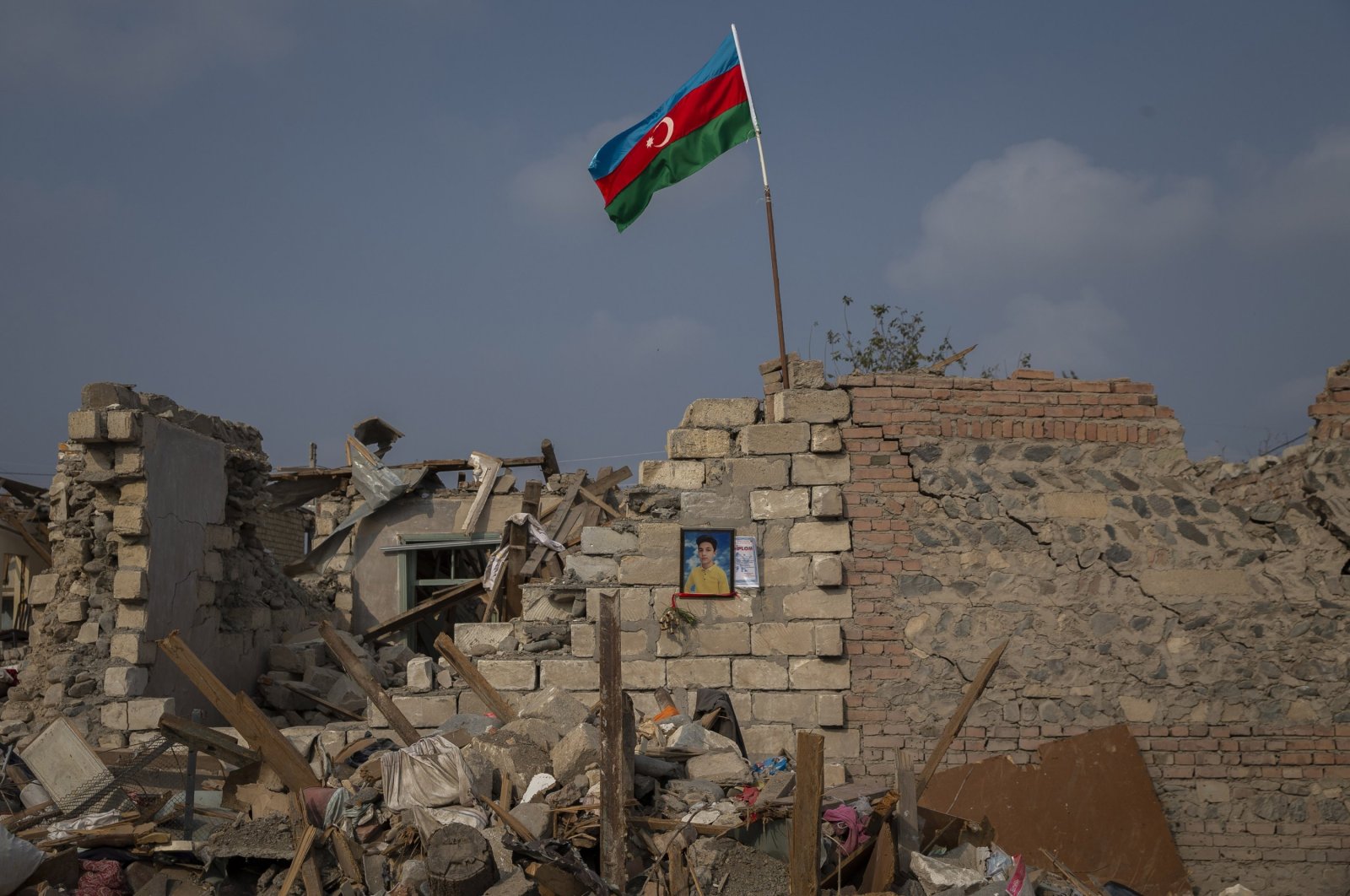 A picture of a boy killed in Armenian attacks hangs on the wall of a damaged building as an Azerbaijani flag waves on the rubble above, in Ganja, Azerbaijan, Nov. 5, 2020. (AA Photo)
by Anadolu Agency Dec 22, 2021 3:35 pm
RECOMMENDED

Turkish companies have undertaken the lion's share of projects for rebuilding the Karabakh region in Azerbaijan, according to the CEO of Baku-based Pasha Bank.

Most of them are Turkish companies, he added.

He added that Turkey, Italy, the U.K., Israel, Russia and other strategic partners of Azerbaijan have shown a keen interest to get involved in the ongoing projects.

Eynehan said before reconstruction starts the area has to go through a demining process, which is underway.

He noted that the Azerbaijani government earmarked $1.3 billion for the reconstruction of the region in 2021, and the same amount is expected to be allocated in 2022.

Some of the major infrastructure projects have been completed, such as Fuzuli International Airport, he said.

Moreover, he added, 650 kilometers (404 miles) of roads have been constructed in the region – connecting liberated territories to nearby cities.

The Aghdam industrial park, smart villages in the Zangilan and Fuzuli districts, precious metals and construction materials production projects in Zangilan, Kalbajar and Aghdam districts are in the planning and development phase and are expected to be vital in the reintegration of the region into the overall economy, he added.

Touching upon visa-free travel with Turkey, he said the decision's impact was seen immediately.

"During the third quarter of 2021, Turkey was the top destination for Azerbaijani tourists, constituting more than 60% of total travelers."

He noted that remittances from Azerbaijan to Turkey increased 26% year-on-year in the January-September period. The figure increased 43% from Turkey to Azerbaijan.

"In the first three quarters of 2021, $530 million worth of Turkish capital was invested in the Azerbaijani economy," he said.

Mentioning the preferential trade agreement, signed this February, Eynehan underlined that the deal supported the growth of trade volume between the countries.

Trade turnover between Azerbaijan and Turkey (excluding oil-gas sector product exports from Azerbaijan) rose by 26% year-on-year in the first nine-month period, he said.

The trade volume increased to $3.7 billion over the same period, he added,

"The agreement had the strongest impact on non-oil exports from Azerbaijan to Turkey, which rose by 81% year-over-year," he added.

He asserted that these deals will contribute to the goal of reaching an annual trade volume of $15 billion.

Turkish contractors were involved in 455 projects in Azerbaijan amounting to $15.4 billion, he said.

Azerbaijan invested nearly $19 billion in Turkey, while Turkish investments in Azerbaijan amounted to $12 billion, he recalled.

The agreements reached in 2021 and existing fraternal ties ensure further strengthening of trade and investment relations in 2022, he added.

Touching upon his bank's position in Turkey, he said 2021 was a year in which the bank adapted to the new normal and new ways of doing business, and continued on its way with new experiences.

The bank's total loan size also enlarged by 32% over the same period, he added.

While the bank supported real and automotive sectors in 2021, it will continue its support to these sectors by increasing fund diversity, he underlined.