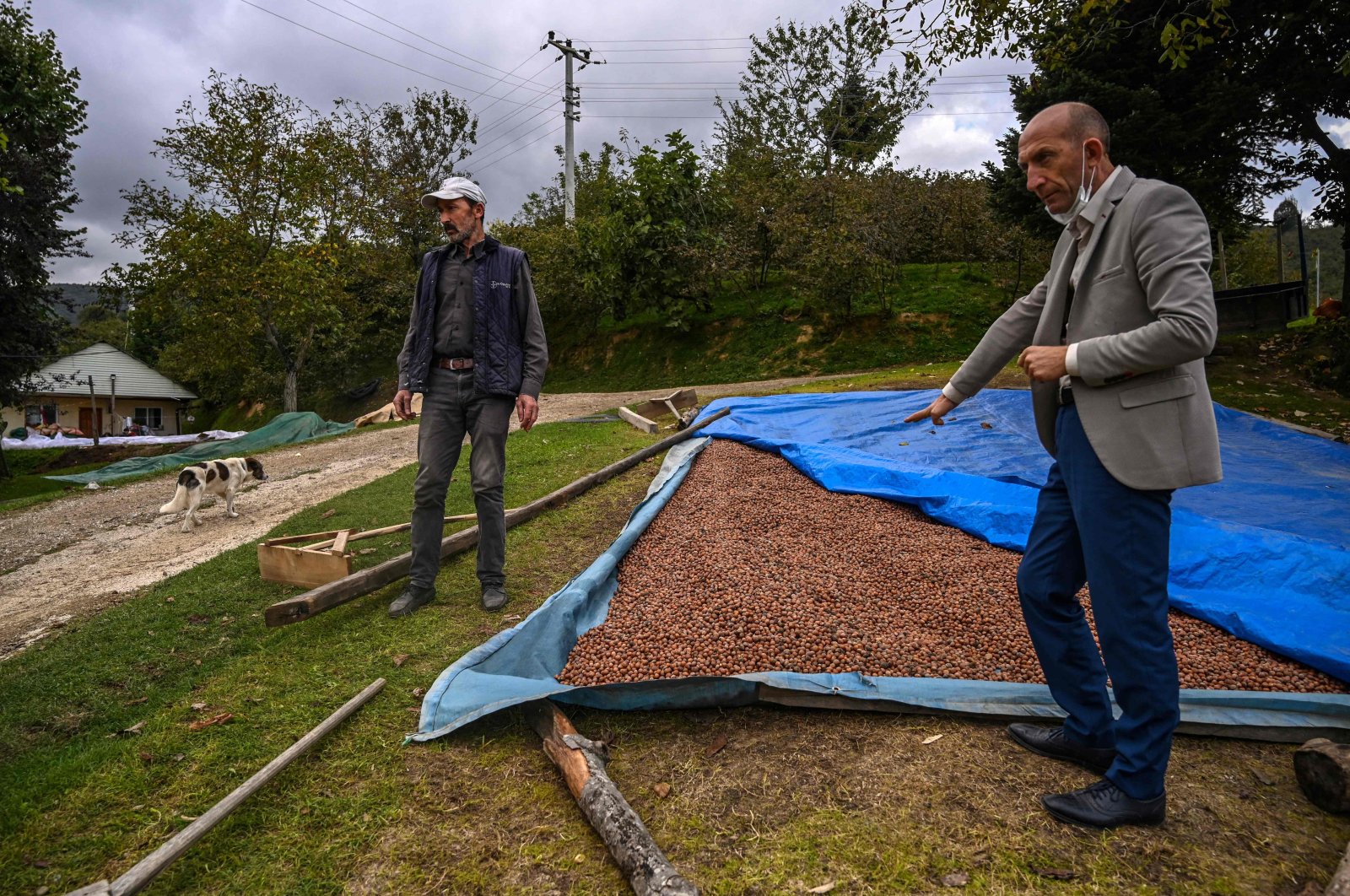 Hazelnuts producers put hazelnuts to dry on the ground after being washed at a nut orchard in the Akyazı district, in Sakarya, Oct. 5, 2021. (AFP Photo)
by French Press Agency - AFP Oct 27, 2021 1:08 pm
RECOMMENDED

Kneeling from dawn till dusk, the Turkish farmers picking most of the hazelnuts going into Nutella spreads complain of exploitation and meager pay, setting up a clash over labor rights.

The little heart-shaped nut making Nutella such a guilty pleasure is a cherished commodity in Turkey, which accounts for nearly 70% of the world’s production and 82% of global exports, according to the U.N. Food and Agriculture Organisation (FAO).

But this love is not shared by Mehmet Şirin, a 25-year-old from Turkey’s southeast who travels to lush northern valleys filled with hazelnut trees to make a living during harvest season.

“We work 12 hours a day. This is a demanding job,” said Şirin, a hood protecting him from a cold drizzle covering the leafy ground where the hazelnuts hide after ripening and falling from the trees.

“The hazelnuts we pick go abroad and come back in the shape of Nutella. They make more profits than us. This is exploitation,” he said in the Black Sea town of Akyazı.

The world-famous spread is made by Italy’s Ferrero confectionary, Turkey’s top hazelnut purchaser. The global giant's other sweets include Ferrero Rocher chocolates and Kinder chocolate eggs.

But the Italian company is developing ill will in Turkey, where farmers get paid roughly 12 euros ($14) a day collecting nuts off the ground and stuffing them into huge sacks they then lug on their backs.

“They have a monopoly, they have a free hand,” said Aydın Şimşek, 43, a local producer watching his dozen or so workers pick nuts out of the corner of his eye.

“This year, I will not sell my hazelnuts to Ferrero,” he said.

Ferrero has six facilities and employs more than 1,000 people in Turkey, where it has been sourcing hazelnuts across the agriculture-rich country’s northern Black Sea regions for the past 35 years.

In 2014, it acquired Turkey’s Oltan Group – a local market leader that procures, processes and sells nuts.

A Ferrero spokesman told the Agence France-Presse (AFP) that the Italian company does not directly “own or manage farms in Turkey and does not source hazelnuts directly from farmers.”

It “procures the hazelnuts it needs for its products respecting free market regulations and based on market dynamics,” the Ferrero spokesperson said.

“For God’s sake, they buy hazelnuts for TL 22 to TL 23 a kilo and sell them for $23,” the Turkish Chambers of Agriculture’s Istanbul branch president Ömer Demir fumed.

“Turkey exports about 300,000 tons of hazelnut to the world. How strange that only foreign companies earn profits from this business,” he said with bitter irony.

Demir said Ferrero and other global companies sourcing Turkey’s hazelnuts provide tools and fertilizers for the farmers, paying for their harvests in advance.

They “are running their own show,” Demir said, calling on Turkey’s competition authority to intervene.

“Otherwise, they will control everything everywhere and we will come to a point where we cannot sell our product to anyone else but them,” Demir said.

‘I needed the cash’

Producer Cabbar Saka already feels like he has no choice, selling his entire month’s harvest to traders working on behalf of the Italian company.

“I needed the cash because my daughter was getting married,” Saka said.

“Producers are scared of speaking out against Ferrero,” said Şener Bayraktar, who heads Akyazı’s chamber of agriculture.

“They fear that if they speak out, they will no longer be able sell their hazelnuts.”

For a solution, Bayraktar wants the Turkish Grain Board – a state regulator that oversees pricing, storage and payments – to raise its quotas so that producers can sell more nuts, diversifying their client base.

The Turkish government has said it is ready to help, raising local hopes.

In Akyazı, where farmers dry their harvest on tarpaulins spread across their front yards, producer Şimşek said he wants to break his dependence on the Italians as soon as he can.

“Had Nutella been buying our hazelnuts on fair terms, if it didn’t oppress us, we would be proud and eat it ourselves,” he said.

“But the way they operate, we can’t stomach Nutella anymore.”

5 things to know about Nutella and rivals

Do you prefer Nutella or Nocciolata? With or without palm oil in your spread? More chocolate, more hazelnut or even peanut?

People have fought to buy their favorite spread cheaply, while in Turkey hazelnut farmers complain of exploitation and meager pay.

Here are five things to know about spreads.

Farmers in leading hazelnut exporter Turkey accuse Italy’s Ferrero confectionary, which churns out Nutella, of abusing its near monopoly to force down prices.

Ferrero, which purchases about a third of Turkey’s production, mainly through intermediaries, riposted that it did not use produce “made with unethical practices.”

The group also cited in defense its training program for farmers.

By last year, Ferrero said it could trace the origin of 44% of its Turkish hazelnuts and hoped to reach 100% in 2023 despite the pandemic.

What about palm oil?

European health authorities are not impressed by the nutritional value of Nutella.

The palm oil industry is also accused of deforestation. In 2015, then French environment minister Segolene Royal had to apologies after angering Ferrero with a call to stop eating Nutella to protect the forests.

The group has boasted for several years about topping the World Wildlife Fund's palm oil buyer's scorecard for a responsible industry.

Yes, there is a World Nutella Day

World Nutella Day falls on Feb. 5 and the brand still accounts for more than 50% of world sales for chocolate spreads, says Euromonitor International.

In January 2018, when customers fought to get their hands on cut-price jars of Nutella in French supermarkets, the story made world headlines.

Intermarche ended up paying 375,000 euros ($435,000 at current exchange rates) in fines for the loss-leader promotion.

Giovanni Ferrero, who inherited the empire that bears his surname, sits at 40th place on Forbes’ list of the world’s richest people, with a fortune of more than $35 billion.

The Ferrero group reported turnover of $15 billion last year, but does not reveal how much of that comes from chocolate spreads.

Milka, Nestle, Barilla, Banania, Nocciolata, Bonne Maman ... a multitude of players try to compete with Nutella for a share of the growing market for spreads.

New products come out every year around the globe and have slightly eaten into Ferrero’s dominance, Euromonitor International and sector analysts say.

Such competitors count on a variety of recipes from vegan or gluten and palm oil free, but often charge a higher price.

And sales of organic products have climbed every year recently.

The world consumes more than 300,000 tons of Nutella a year – a figure that is often, if bizarrely, compared to the similar weight of New York’s Empire State Building.

But that pales in comparison to another stateside spread rival.

The U.S. uses more than 630,000 tons of peanut butter a year, according to the American Peanut Council – so it seems hazelnuts are not about to replace peanuts in American spreads at least.