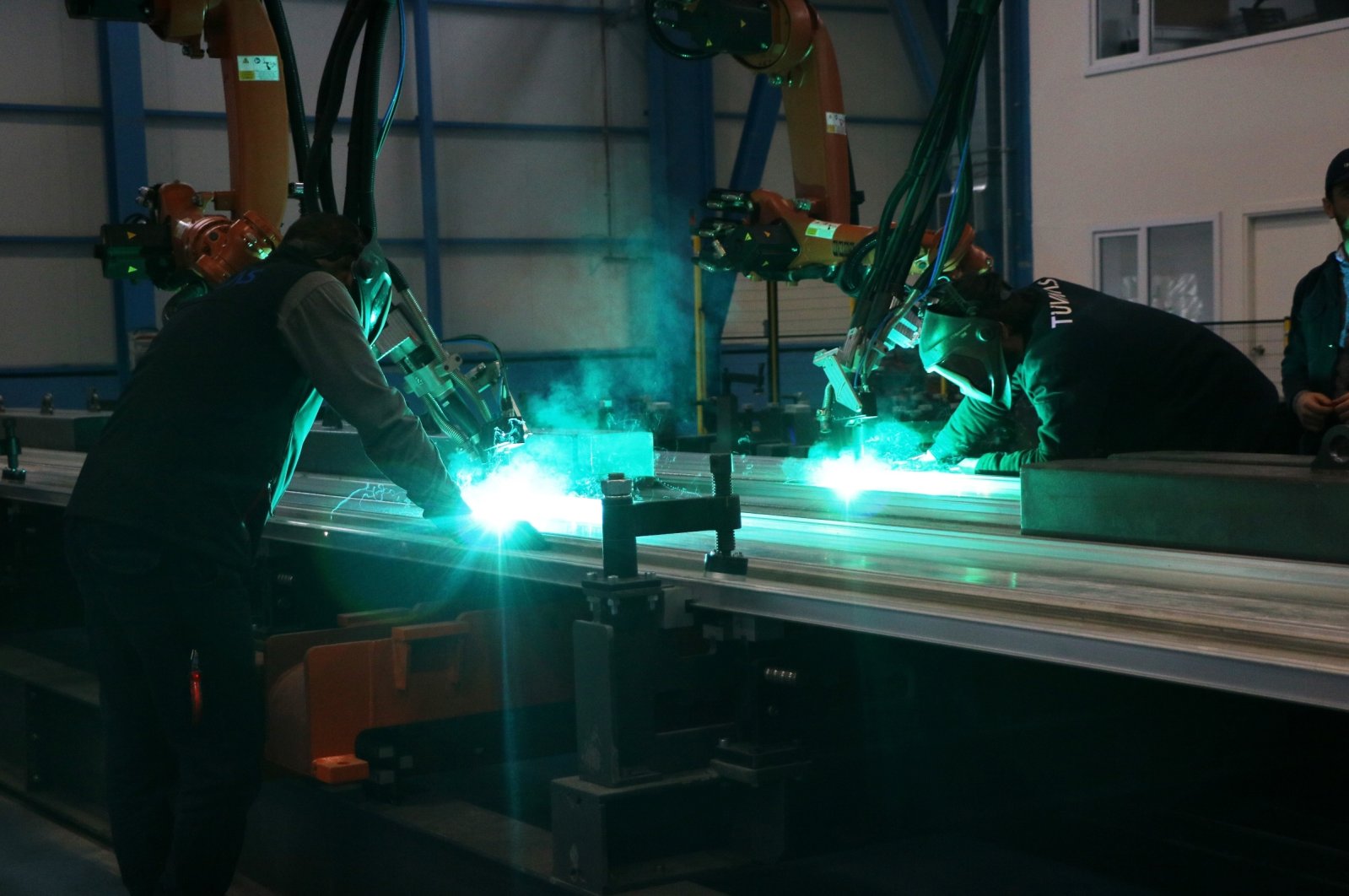 Workers are seen in the Turkish Wagon Industry (TÜVASAŞ) plant in the northwestern province of Sakarya, Turkey, May 26, 2020. (DHA Photo)
by DAILY SABAH WITH AGENCIES Aug 14, 2020 11:50 am
RECOMMENDED

The surge was driven by improvements in all main subindices, the Turkish Statistical Institute (TurkStat) data showed.

Commenting on the data, Treasury and Finance Minister Berat Albayrak said Turkey ranked first in Europe with the monthly rise in the index.

“The strong recovery in leading economic indicators will hopefully once again disappoint those with pessimistic expectations about growth figures,” Albayrak said on his Twitter account.

The mining and quarrying, and electricity, gas, steam and air conditioning supply indices increased by 7.8% and 6.7%, respectively, in June.

Turkey boasts one of the world’s top five economies in pandemic recovery as shown by its strong revival in the industrial production, Industry and Technology Minister Mustafa Varank said, evaluating the data.

"These figures showed that our macroeconomic policies during the pandemic were right for the real sector," Varank said in an online meeting organized by the Foreign Economic Relations Board of Turkey (DEIK).

After the difficult period of April due to the pandemic, economic recovery accelerated this May and June, he noted.

Due to the pandemic, several sectors, including industrial production, have faced problems related to measures such as lockdowns.

But despite the outbreak, said Varank, this June Turkey prepared a record 859 investment incentive certificates. Those investments total nearly TL 86 billion ($12.6 billion) and are set to create 130,000 new jobs, he underlined.

A separate report by TurkStat on Friday showed the economy's total turnover improved year-on-year in June with the backing of industry, trade and construction sectors.

The total turnover index including industry, construction, trade and services sectors increased by 10.4% on an annual basis in the month, the data showed.

The index jumped by 29.2% in the construction sector. The trade and industry sectors followed with 19.3% and 8.7%, respectively, in the month. Slashed by the coronavirus pandemic, the services sector's index dropped by 18.3% in the same period.

According to TurkStat’s definition, turnover is an important short-term indicator used to assess the country's economic situation.

Turnover indices are composed of sales of goods and services invoiced by enterprises in the reference month over a certain period, to monitor developments on a quarterly and yearly basis.

All enterprises that declare their value-added tax payments to the country's revenue administration are included in the turnover index calculation.

Varank further also stressed financial markets’ fluctuations should not affect the real sector and added: “You should not change your investment, production and employment plans by looking at daily changes.”

Turkish industrialists should seek out new markets and look to gain a competitive edge in existing ones, he added.

Year-on-year, industrial production rose 0.1% in June, expanding for the first time since February.

Turkey logged its first virus infection on March 11 and soon after many factories halted operations, leading to drops in production of 31.4% in April and 19.9% in May.

Among the three main subindices, the manufacturing index was the sole index posting an annual increase in the month, with 1%, TurkStat said.

The mining and quarrying index slipped 8%, while the electricity, gas, steam and air conditioning supply index fell 6.4% during the same period.

Industrial production is considered a vital indicator for the economy, as it is seen as a preliminary gauge for gross domestic product (GDP) growth.

In comparison, the eurozone’s industrial production rose in June but the rebound after the coronavirus-induced record drops in March and April was below expectations for a second straight month and slowed from May.

Manufacturing output in the 19-country currency bloc rose by 9.1% in June from May, according to the European Union statistics office Eurostat, after it had increased by 12.3% in May on the month.

The output increase was driven by a surge in the production of durable goods, such as cars or fridges, in what could be seen as a positive sign of consumer confidence as COVID-19 restrictions were eased in the region.

However, the month-on-month increase was lower than economists had forecast. It slowed from May, and production remained largely below precrisis levels.

The May reading had also disappointed economists who had been expecting a 15% rise as factories reopened after lockdowns were softened. Eurostat also slightly revised downward from 12.4% its previous estimate of industrial output in May.

In a clearer sign that the bloc’s manufacturing sector is still far from having recovered, output tumbled by 12.3% in June on the year, more than market expectations of an 11.5% fall.

The year-on-year drop was less pronounced than in May and April, confirming a gradual rebound. All countries for which data were available posted an annual drop, with the exception of Ireland where industrial output grew by 4.5% in June compared to a year earlier.