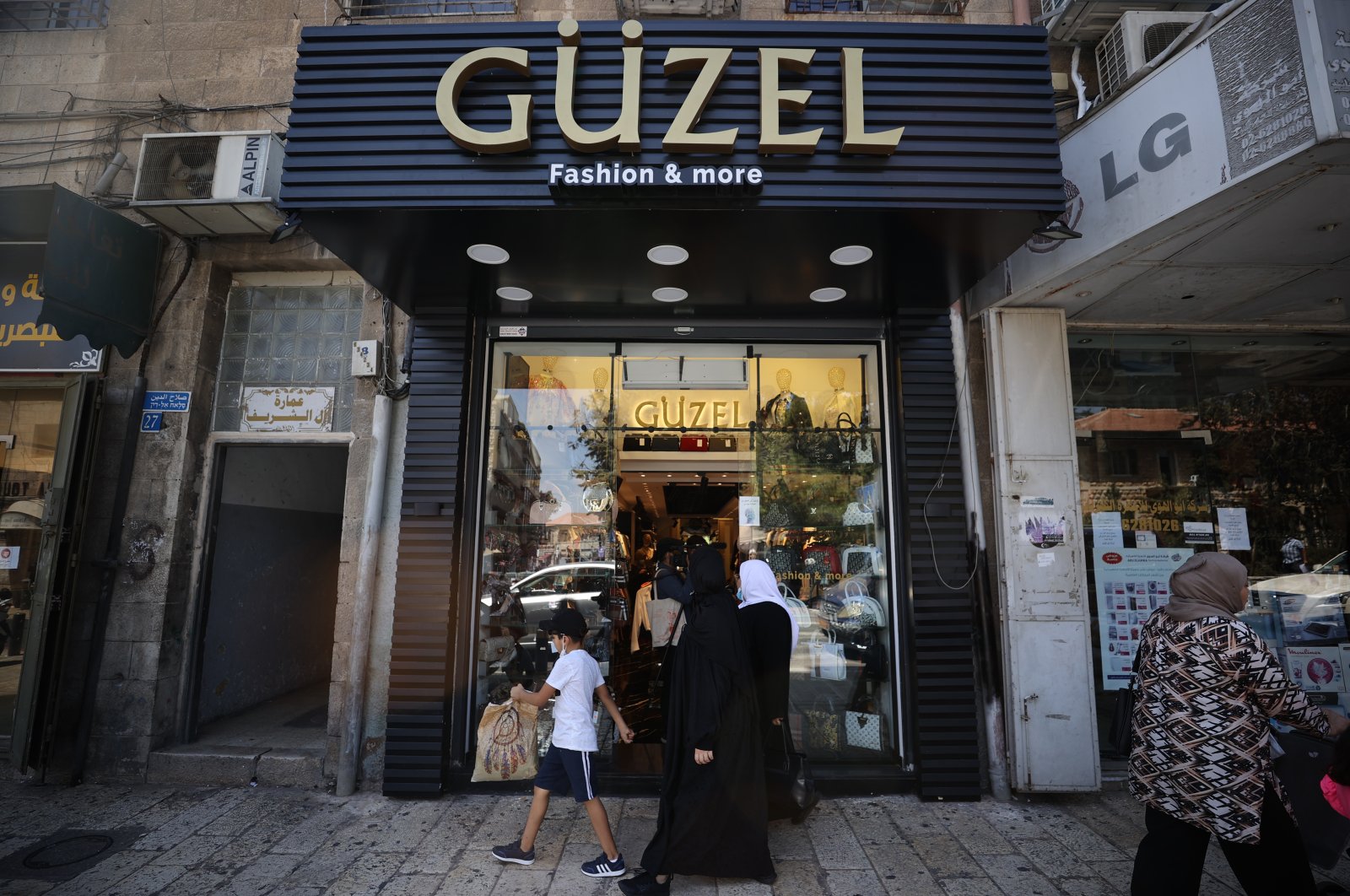 Walking along the streets of Jerusalem, one can easily spot several shops bearing Turkish names.

Turkish products are very popular in the occupied city and Turkey, a country located at the crossroads of Europe and Asia, is a top tourist destination for many Palestinians, according to the city's tourism offices.

While previously names like Istanbul and Turkey were common with places selling Turkish cuisine and products, new shops with Turkish names such as Gümüş, meaning silver, and Güzel, which means beautiful, are also becoming more widespread.

"We chose this name because people in Palestine in general and Jerusalem, in particular, love the Turks and their products very much," Muhammed Sidr, the 26-year-old owner of Gümüş shops for Islamic clothing, told Anadolu Agency (AA).

Gümüş is located along Al-Zahraa Street, one of Jerusalem's most prominent commercial streets, while two other branches are located in the Kafr Aqab neighborhood, north of the city, and in Shuafat camp.

He added that some people who previously traveled to Turkey were familiar with the name and were more curious to know its meaning.

"Many people traveled to Turkey and came across this name there, and they asked us about its meaning, and we told them that it means silver."

Sidr hailed the Turks as "respectful, welcoming and generous people."

He said the Palestinian confidence in Turkish goods has encouraged him to choose to import Turkish products over goods from Chinese suppliers.

"We are dealing with seven Turkish companies because many people prefer their goods. In the past, we imported goods from China, but once we introduced Turkish goods, many Palestinians loved them because of their high quality," Sidr said. "There is confidence in Turkish goods."

"People are looking for quality, and we provide it," he said.

Like Gümüş, a shop named Güzel, located on the city's famous Salah al-Din Street, is also famous for its Turkish goods.

The shop owner, Ibrahim Wuzuz, said the name Güzel was well-chosen "because the goods are all from Turkey, and we thought of a beautiful Turkish name that would attract the public."

He echoed Sidr's words that Turkish goods are "of very high quality" and at affordable prices.

"The quality of Turkish goods is high, and their price is affordable for everyone. They may be more expensive than Chinese goods, but their quality makes the price worth it," Wuzuz told AA, adding that the demand for Turkish goods increases by the day.

Another Turkish name adopted by shops is the historical hero Ertuğrul. With its TV series expanding in popularity across the Arab world, a large restaurant in the Kafr Aqab neighborhood, north of Jerusalem, has been named Ertuğrul.

On its facade, Turkish flags as well as the flags of the Kayi tribe as shown in the Ertuğrul series can be seen flying.

Osama Abu Hadid, a chef at the Ertuğrul restaurant, said the name Ertuğrul is known by most of the city's population and the fact that the restaurant serves both Turkish and Palestinian food has made the business successful.

Several screens in the restaurant overlooking the old Jerusalem International Airport, which has been closed down by the Israeli authorities, show the Ertuğrul series and play its famous music.

"We show the series and its music, and when a party is organized in the restaurant, we play the beautiful and distinctive music of the Ertuğrul drama," Abu Hadid said, noting that the restaurant has garnered 10,000 followers on its Facebook page as a result.

Abu Hadid said he would like to see the Ertuğrul actors such as Engin Altan Düzyatan visit Jerusalem in the future.

The status of Jerusalem remains at the heart of the Israel-Palestine conflict. Palestinians hope East Jerusalem, now occupied by Israel, might eventually serve as the capital of a future Palestinian state.

Home to holy sites sacred to Muslims, Jews and Christians, East Jerusalem was captured by Israel in the 1967 war, annexing it in a move not recognized internationally. Israel views the entire city as its capital, while the Palestinians want East Jerusalem as the capital of their future state.

Jerusalem became part of the Ottoman Empire after the defeat of the Mamluks in the battle of Marj Dabiq in 1517 until its fall at the hands of the allied forces in World War I in 1917, bringing an end to 400 years of Ottoman rule over the historical city.

Historians note that Jerusalem enjoyed peace and prosperity during the reign of the Ottoman ruler Sultan Suleiman I, commonly known as Suleiman the Magnificent, who reconstructed the city's walls and the Dome of the Rock mosque.