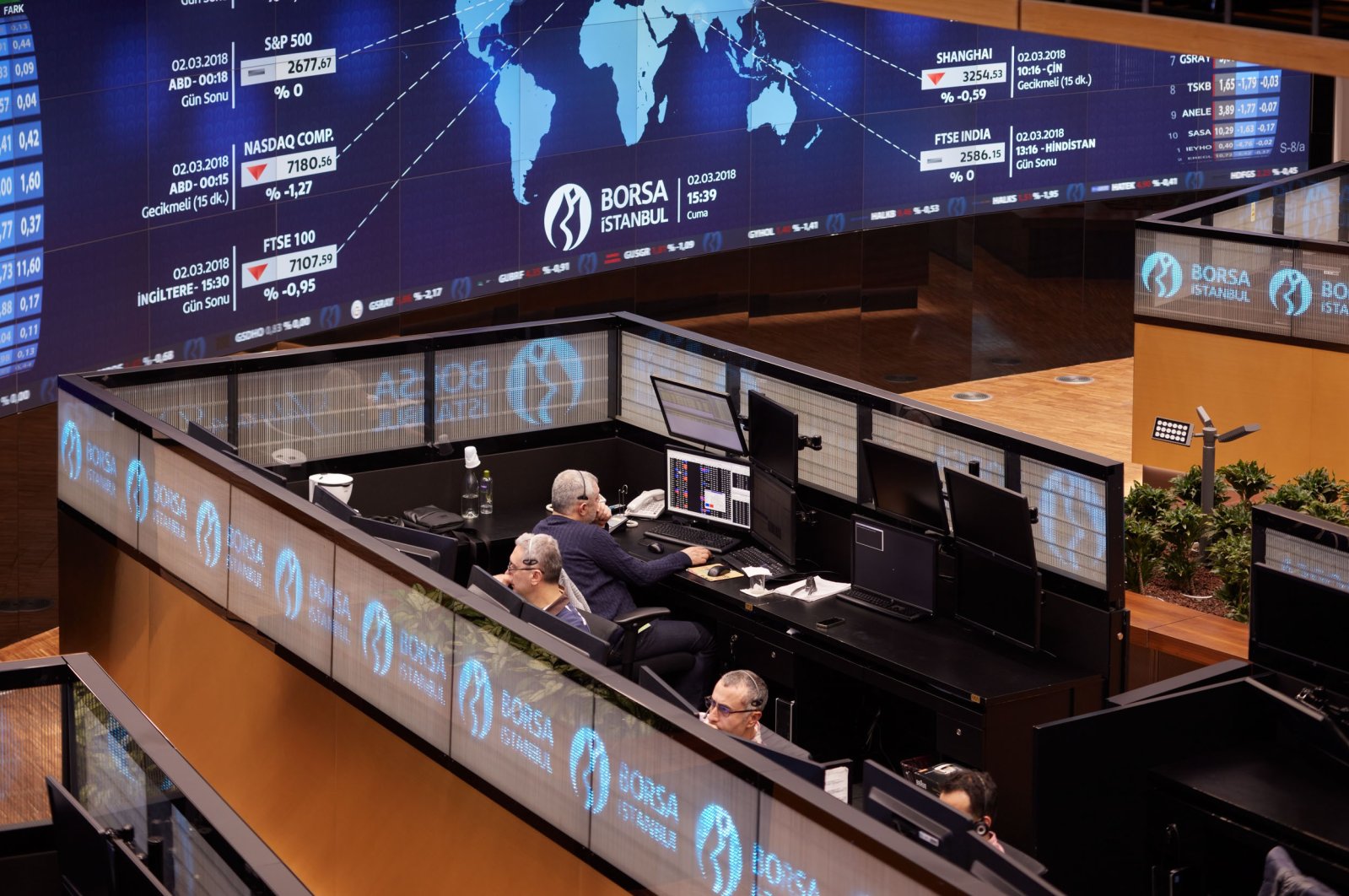 Traders work at their desks on the floor of the Borsa Istanbul in this undated file photo. (IHA Photo)
by DAILY SABAH Jun 22, 2020 9:11 pm

Turkish stocks are among the few that have been benefiting as benchmark stock index BIST 100 erased its 2020 losses, with growing concerns over rising coronavirus infections fueling worries in markets around the globe

While global stock markets have lost ground as they assess recovery hopes against a spike in coronavirus infections that could derail a rebound in business activity, Turkey’s benchmark equities gauge has erased its 2020 drop with recent performances.

Torn between record stimulus and growing fears of a second wave of infections, stocks have been moving sideways in recent weeks after rising more than 40% from March lows on hopes the worst of the pandemic was over. A recent rise in coronavirus infections in parts of Europe and the United States has fueled fears of a setback to the nascent economic recovery as they reopened their societies and economies.

Turkish stocks have outpaced developing-nation peers, with the MSCI emerging-market index still down 10% for 2020. The Stoxx Europe 600 Index has slipped 12%.

The BIST 100 has been one of the five indexes that compensated for losses in local currencies worldwide, along with stock exchanges such as the Nasdaq Copenhagen, formerly known as the Copenhagen Stock Exchange, Lithuania’s Nasdaq Vilnius and Latvia’s Riga Stock Exchange, Bloomberg HT reported Tuesday.

European stock markets on Tuesday were boosted by better-than-feared business activity surveys for June. The purchasing managers' index was just shy of the level that indicates the economy is growing again after a devastating plunge in the spring.

Global coronavirus infections topped 9 million on Monday shortly after the World Health Organization (WHO) warned that the pandemic was accelerating. The illness has killed over 469,000 people worldwide since the outbreak began in China last December, according to figures compiled by the U.S.' Johns Hopkins University. The U.S., Brazil and Russia are currently the countries hardest hit in the world.

"Almost every day we reach a new and grim record," said WHO chief Tedros Adhanom Ghebreyesus on Monday, noting that more than 183,000 new cases were reported to the WHO on Sunday – easily the most in a single day so far.

Investment Consultancy Manager at Gedik Investment Üzeyir Doğan said the resignation of Geoffrey Berman, the chief federal prosecutor in New York who was also leading a U.S. case against the Turkish state lender Halkbank had an impact on the rally in the BIST 100 on Monday.

Shares Halkbank closed the day Monday up 5.56%, after surging as much as 9% within the day. Shares traded 2% lower Tuesday.

An extraordinary standoff between the U.S. Justice Department and Manhattan U.S. Attorney Berman ended on Saturday when the prosecutor agreed to step down as U.S. Attorney for the Southern District of New York, the office that had been investigating President Donald Trump's personal lawyer, Rudolph Giuliani.

Berman's confirmation of his departure came after Attorney General William Barr told him he had been fired by Trump at Barr's request, and that Berman's hand-picked No. 2, Deputy U.S. Attorney Audrey Strauss, would become Acting U.S. Attorney until a permanent replacement is installed.

The lender in late March pleaded not guilty to the charges in a federal court in Manhattan. The case accused Halkbank of using money servicers and front companies in Iran, Turkey and the United Arab Emirates to evade sanctions through sham transactions in gold, food and medicine.

“This (Berman's resignation) has also strengthened expectations that the case process in the U.S. could end positively,” Doğan told Bloomberg HT.

Analysts had pointed at 111.000 level as a resistance level for the BIST 100, however, the index broke the resistance point and has set its eye on 115.000 level. In case it breaks this level as well, analysts think the index could climb to as much as 120.000 points. They are also said to agree that surpassing the 120.000 resistance level could herald a major jump.

Investors and markets’ eyes this week will be on the sixth Monetary Policy Committee (MPC) meeting of the Central Bank of the Republic of Turkey (CBRT), which is expected to continue its rate-cutting cycle after it lowered its policy rate for a 9th straight time last month.

The bank is expected to trim its policy rate by 25 basis points to 8% on Thursday, according to a Reuters poll, a relatively limited cut in an aggressive easing cycle that has lasted nearly a year.

The bank has slashed its key interest rate by 1,575 basis points since July last year, when it stood at 24%, in a muscular bid to stimulate the economy and, more recently, to counter the economic downturn brought on by the coronavirus outbreak.

Since the outbreak hit Turkey, the central bank has slashed rates by 250 basis points, bought record amounts of government bonds and provided some funding below the policy rate.

Enver Erkan, an economist at Tera Yatırım, said the policy flexibility had narrowed after the year-long monetary easing.

“Interest rates are below inflation and we have gotten close to the central bank’s year-end inflation estimate,” he said, adding that the bank would likely stick to small cuts or stand pat in the coming months.

With the outbreak hitting domestic demand, tourism and exports, the bank last month lowered its inflation forecast for end-2020 to 7.4%.

Plummeting global oil prices have pushed inflation down in energy import-dependent Turkey. The inflation climbed more than expected to 11.39% year-on-year in May, according to the Turkish Statistical Institute (TurkStat) data. May's annual inflation was up from 10.94% in April. Month-on-month, consumer prices rose 1.36% in May.

The median estimate of 11 economists for the policy rate at year-end stood at 7.75%, down from 8% last month, with forecasts ranging between 8% and 7.25%.