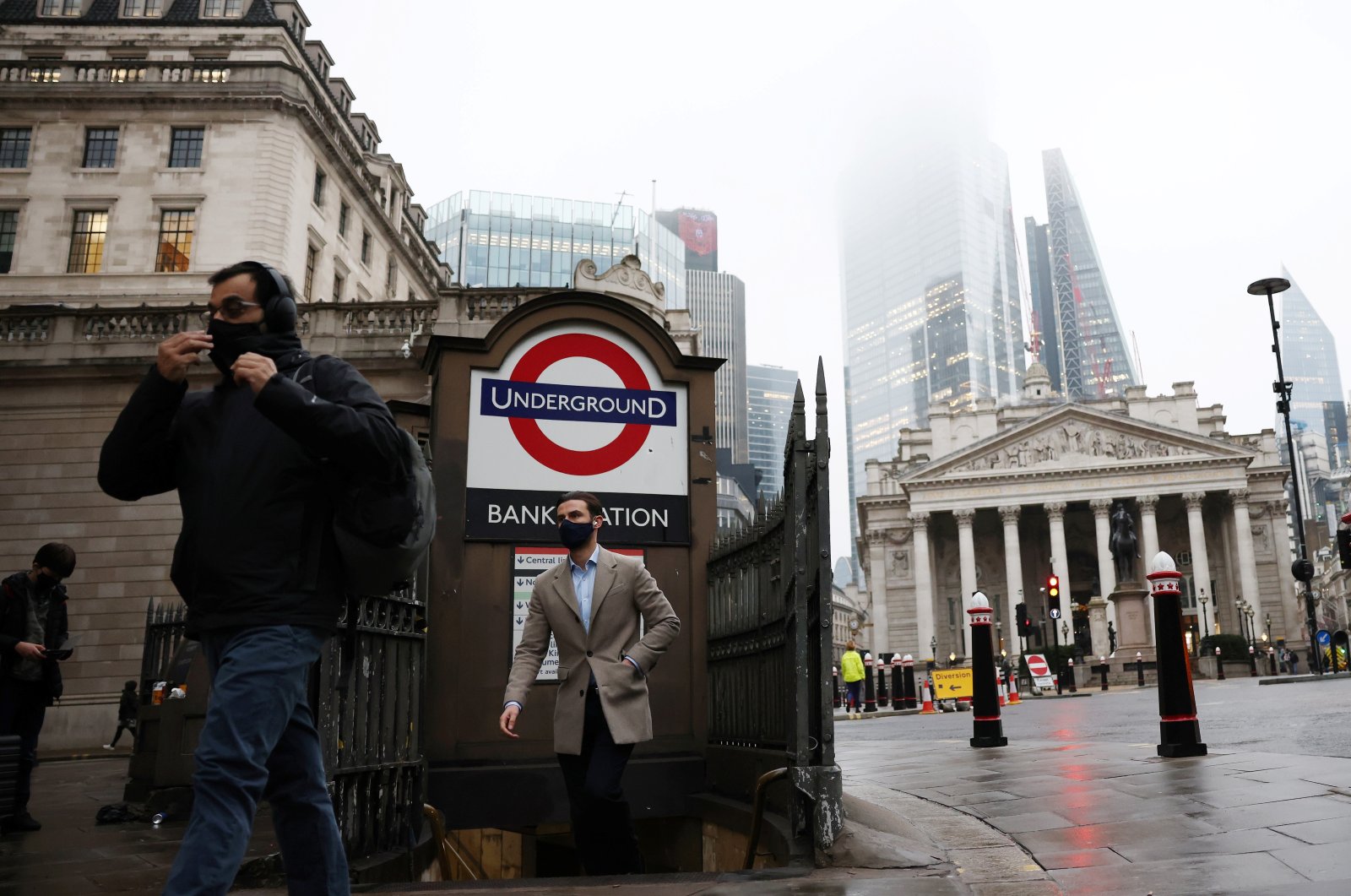 People exit Bank station in the City of London financial district, amid the coronavirus outbreak, in London, Britain, March 4, 2021. (Reuters Photo)
by REUTERS
Mar 12, 2021 11:58 am

The British economy shrank in January as the nation was hit by a new round of coronavirus restrictions, official data showed Friday, and trade with the European Union was hit hard at the start of the country’s new, post-Brexit trading relationship.

Gross domestic product (GDP) in the first month of the year was 2.9% lower than in December, the Office for National Statistics (ONS) said. Economists polled by Reuters had expected a contraction of 4.9%.

Finance minister Rishi Sunak said on Friday that the data showed how COVID-19 continued to affect the economy.

“Today’s figures highlight the impact the pandemic continued to have on our economy at the start of the year as we tackled the new variant of the virus – and I know this is a cause of concern for many," Sunak said in a statement.

He added that the vaccine rollout and his budget announced last week were reasons to be hopeful.

Britain’s economy is likely to shrink by 4% in the first quarter of 2021, due mostly to the latest lockdown but also because of disruption caused by new, post-Brexit rules for trade with the European Union, the Bank of England (BoE) said last month.

Samuel Tombs, an economist with Pantheon Macroeconomics, said Friday’s data and other more recent indicators suggested the economy might now be on course to fall by a less severe 2% in the first quarter.

The BoE is expected to keep its stimulus programs on hold at the end of its March meeting next Thursday as it predicts that Britain’s vaccination program – Europe’s fastest – will trigger a bounce-back in the economy in the coming months.

The ONS data showed exports and imports from Britain to the EU plunged by the most on record although the ONS said a difference in the way the figures were gathered was causing a delay to some data.

Exports to EU down over 40%

Exports of goods to the EU, excluding nonmonetary gold and other precious metals, slumped by 40.7%. Imports fell by 28.8%.

Many companies brought forward imports of goods late last year to avoid the risk of border disruption as the new U.K.-EU trading relationship began in early 2021 and global trade flows have been hit by the coronavirus pandemic.

The ONS said the overall GDP figures were hit hard by the impact of social distancing rules on Britain’s huge services sector.

“The economy took a notable hit in January, albeit smaller than some expected, with retail, restaurants, schools and hairdressers all affected by the latest lockdown,” Jonathan Athow, an ONS statistician, said.

“Manufacturing also saw its first decline since April with car manufacturing falling significantly. However, increases in health services from both vaccine rollout and increased testing partially offset the declines in other industries.”

Britain’s economy shrank by 1.7% in the three months to January, a smaller fall than a median forecast of a contraction of 2.5% in the Reuters poll.

Britain’s economy is about 9% smaller than it was before the pandemic began in February 2020, the ONS said.

Prime Minister Boris Johnson plans to ease England’s coronavirus restrictions gradually before lifting most of them by late June.

Growth in the next few months is also likely to get a boost from Sunak’s announcement last week that he will pump a further 65 billion pounds into the economy, including an extension of his jobs-protecting furlough scheme.

The ONS said Britain’s dominant services sector – which has been hit hard by social-distancing rules – shrank by 3.5% in January from December. The Reuters poll had pointed to a 5.4% contraction.

Manufacturing contracted by 2.3% but construction output rose by 0.9%.

The monthly fall of nearly 3% in GDP in January was much less severe than its plunge of 18.3% in April last year when Britain went into its first coronavirus lockdown.

Many companies have adapted to life under lockdown, including retailers who have ramped up their online shopping operations and services firms who have tried to help workers to do their jobs from home.