UK GDP shrinks by record 5.8% in March as greater virus damage to come 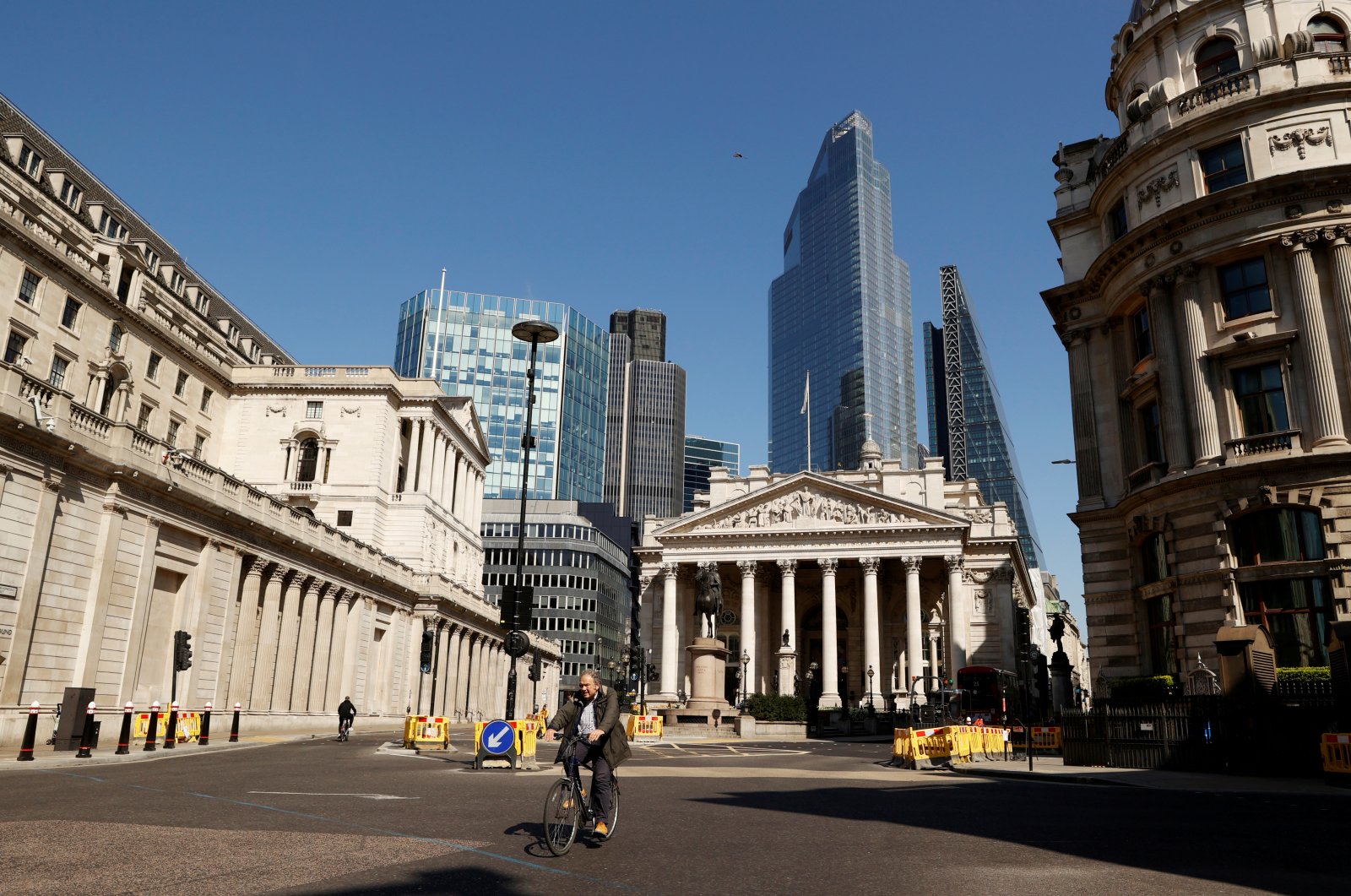 A cyclist is seen near the Bank of England as the spread of the coronavirus continues, London, Britain, April 14, 2020. (Reuters Photo)
by Compiled from Wire Services May 13, 2020 11:43 am
RECOMMENDED

The British economy shrank 2% in the first quarter of the year from the previous three-month period, the biggest quarterly decline since the global financial crisis of 2008, even though it included just one week of the coronavirus lockdown, official figures showed Wednesday.

The Office of National Statistics found that the slump was getting deeper as the quarter came to an end, with output down by 5.8% in March alone, the month when curbs on everyday life started being put in place by the British government. Prime Minister Boris Johnson put the U.K. into full lockdown on March 23, days after closing pubs, restaurants and schools.

The monthly drop in the gross domestic product (GDP) was felt in almost all sectors – from the country's shuttered restaurants and bars to its building sites and factories – and was the largest since comparable records began in 1997.

“With the arrival of the pandemic, nearly every aspect of the economy was hit in March, dragging growth to a record monthly fall,” said statistician Jonathan Athow.

British two-year government bond yields sank to a record low of minus 0.045% after the data, reinforcing expectations that the Bank of England (BoE) will ramp up its record 645 billion pounds ($791 billion) of asset purchases next month.

Finance Minister Rishi Sunak said Britain was now in the midst of a significant recession. "We have to support people's jobs, their incomes, livelihoods at this time, and support businesses so we can get through this period of severe disruption and emerge stronger on the other side," he said after the GDP data.

During March, the only sectors that did grow reflected the needs of a country dealing with a pandemic – IT support, soaps and cleaning products, and the manufacture of pharmaceuticals.

The quarterly decline is the biggest recorded since the fourth quarter of 2008. Since 1955, when equivalent records began, there have only been four quarters worse.

Like others, the British economy is set for a recession of unprecedented proportions, with many economists predicting that the second quarter could see economic output shrink by a quarter, or even more.

Last week, the BoE warned that the British economy could fall by around 30% in the first half of the year, before a strong recovery in the second half of the year, leaving it 14% smaller by the end of 2020. Still, even with that predicted second-half recovery, the annual fall would be the biggest in over 300 years.

Much of the British economy has been mothballed over the past couple of months, with many sectors unlikely to open again for months.

In addition to the 2 million estimated to be unemployed, around 7.5 million people have become economically inactive since the lockdown via the Coronavirus Job Retention Scheme, which sees the government pay up to 80% of the salaries of workers retained, up to 2,500 pounds ($3,075) a month. On Tuesday, the Treasury chief extended the scheme for a further four months until October though suggested that firms will have to start paying a share.

COVID-19 has killed more than 40,000 people in the U.K., the highest death toll reported in Europe so far. Economists said output appeared to have fallen around a fifth after the lockdown came into force.

Some of the lockdown measures are being relaxed in England on Wednesday, with those workers who are unable to work from home, such as those in construction and manufacturing, encouraged to return to work. And a number of recreational sports, such as golf and tennis clubs, can reopen. In all cases, social distancing rules have to be observed.