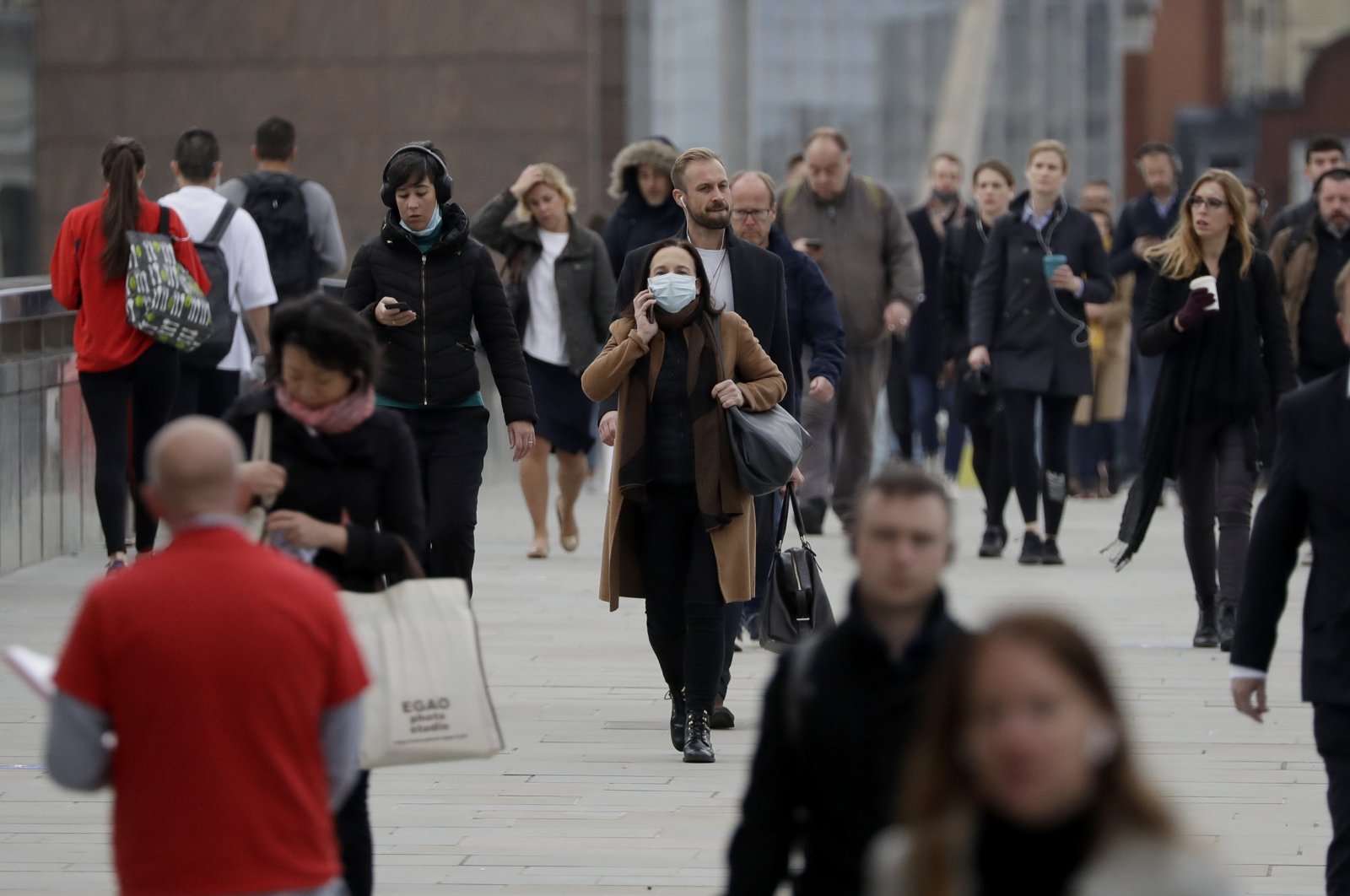 Commuters walk across London Bridge during the morning rush hour toward the offices in London's financial district, Oct. 12, 2020. (AP Photo)
by Agencies Oct 13, 2020 11:58 am
RECOMMENDED

Unemployment across the United Kingdom spiked sharply in August, a clear signal that the jobless rate is heading toward levels not seen in nearly 30 years when a British government salary-support scheme ends this month and new local restrictions are imposed to suppress a second wave of the coronavirus.

The Office for National Statistics said Tuesday that unemployment rose by 138,000 in the three months to August from the previous three-month period. The unemployment rate jumped to 4.5%, its highest rate since early 2017, from 4.1% in the previous quarter.

So far, Britain has been spared the sharp rises in unemployment seen in the United States because of the government's Coronavirus Job Retention Scheme, which has paid most of the salaries of workers who have not been fired. Some 1.2 million employers have taken advantage of the program to furlough 9.6 million people at a cost to the government of nearly 40 billion pounds ($52 billion).

At one stage, around 30% of the U.K.'s working population was on furlough. Although they weren't working over the past few months, they were not counted as unemployed.

Since the program ends at the end of October, many of those still on furlough are expected to be made redundant and unemployment to rise further.

The number of people counted as unemployed rose by the most since 2009, during the global financial crisis, the Office for National Statistics (ONS) said.

"Since the start of the pandemic there has been a sharp increase in those out of work and job hunting but more people telling us they are not actively looking for work," Jonathan Athow, the ONS' deputy national statistician, said.

"There has also been a stark rise in the number of people who have recently been made redundant."

Finance minister Rishi Sunak reiterated Tuesday that his priority remained to slow the rising job losses. However, he is replacing a 50 billion-pound wage-subsidy scheme, which expires at the end of this month, with a less generous program.

"I've been honest with people from the start that we would unfortunately not be able to save every job," he said.

And with many parts of the U.K. seeing large increases in coronavirus infections and the government imposing local restrictions, there are concerns that unemployment could soar toward 3 million, levels not seen since the early 1990s.

"A higher case rate, new restrictions and less government support are likely to push unemployment up over the winter months," said Ian Stewart, chief economist at Deloitte. "The path of the virus continues to dictate the direction of the economy."

On Monday, the government carved England into three tiers of coronavirus risk in a bid to slow a resurgent outbreak, putting the northern city of Liverpool into the highest-risk category and shutting its pubs, gyms and betting shops.

Prime Minister Boris Johnson said the three-level system was designed to "simplify and standardize" a confusing patchwork of local rules, as the country enters a "crucial phase." Johnson said hospitals are filling up with more COVID-19 patients than in March when he ordered a national lockdown.

"With economic support falling just as lockdown restrictions increase across the country, we should prepare for a major increase in unemployment over the coming months," said Nye Cominetti, an economist at the Resolution Foundation think tank.

Leaders across the north of England and unions have slammed the new package as "unacceptable" because it's not as generous as the national scheme and because it doesn't include workers in companies that would be affected indirectly.

"Wage replacement should be 80% for businesses who have to shut," said Frances O'Grady, general secretary of the umbrella Trades Union Congress.

"We need a more generous short-time working scheme for firms which aren't required to close but will be hit by stricter local restrictions, and self-employed people in local lockdown areas need help, too."

The Bank of England (BoE) has forecast that the unemployment rate will hit 7.5% by the end of the year. But BoE Governor Andrew Bailey on Monday repeated his warning that the recovery could prove weaker than the central bank's forecasts.

Britain's economy grew in August at its slowest pace since May as its recovery from the lockdown slowed.

Scores of companies have announced plans to cut jobs since the pandemic struck. Last week the owner of clothing retailers Edinburgh Woollen Mills, Peacock's and Jaeger put 24,000 jobs at risk by saying it was set for administration.