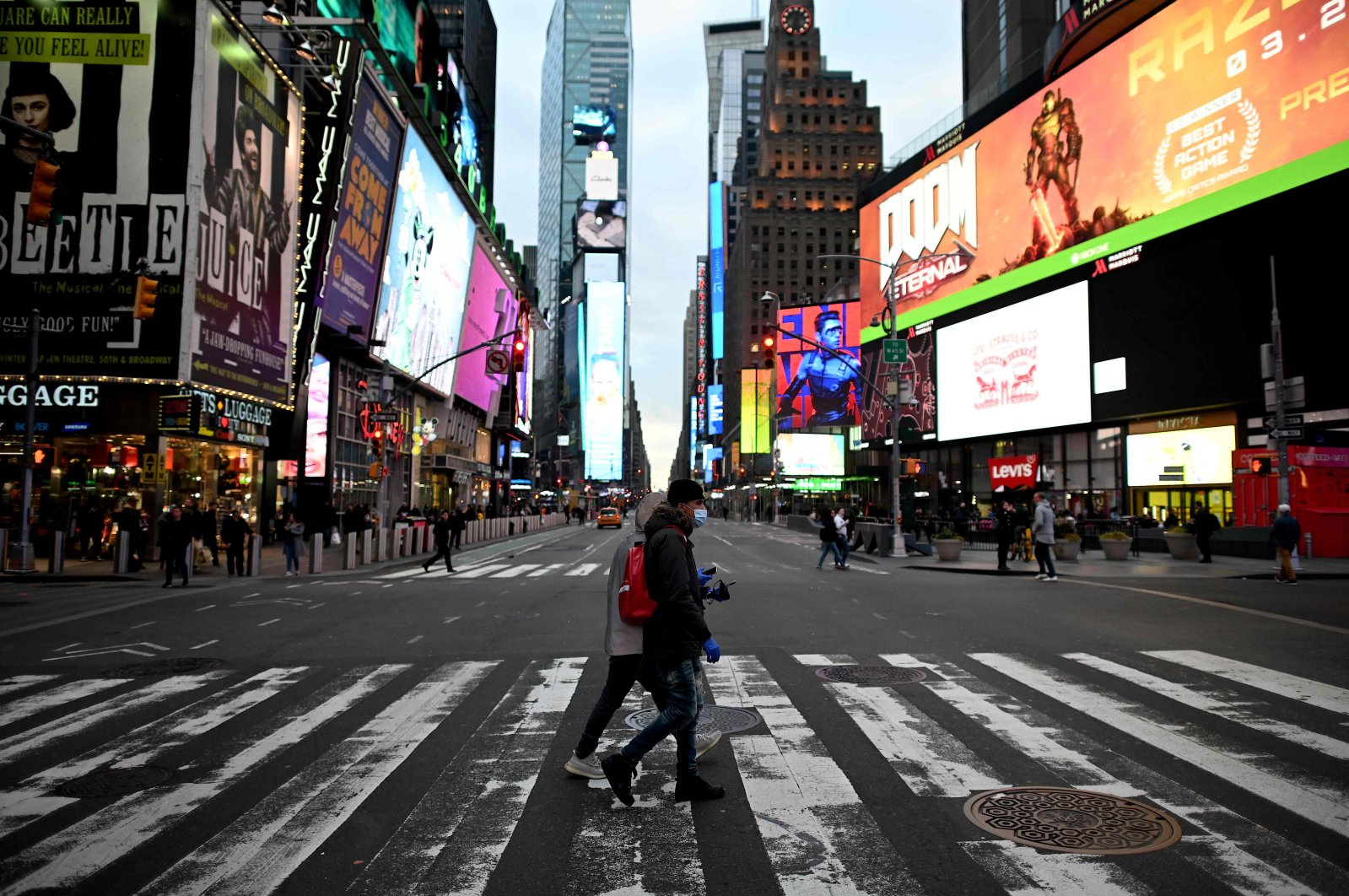 Further spread of the pandemic is severely damaging the global economy, according to Morgan Stanley analysts who expect global growth to dip close to the lows seen during the global financial crisis

Economists from one of Wall Street’s biggest banks have warned that the damage from the coronavirus outbreak will be more devastating economically than previously predicted, as they estimated the U.S. economy would plunge by as much as 30% in the second quarter and projected what is likely to be a deep global recession.

The forecast comes amid a sudden slowdown in the U.S. and European economies and as financial markets around the world continue to decline amid worldwide coronavirus lockdowns. The fast spread of the disease has overwhelmed policymakers’ frantic efforts to contain the pandemic, which is threatening to spark a worldwide economic contraction.

Lockdowns and closures intended to halt the spread of the virus expanded over the weekend to include many cities around the world. The number of people infected surged past 336,000 and the global death toll surpassed 14,000.

Further deterioration in the COVID-19 outbreak is severely damaging the global economy, Morgan Stanely analysts warned Monday. “We expect global growth to dip close to GFC (global financial crisis) lows, and U.S. growth to a 74-year low in 2020," they said.

The bank’s U.S. economists led by Ellen Zentner told clients in a report that they now see American gross domestic product (GDP) falling 30.1% in April-June, which they said will drive up unemployment to an average of 12.8% over the period, they said.

In a similar warning, Goldman Sachs said it expects global GDP to contract by around 1% in 2020, which would be a bigger decline than the one witnessed in the 2008 global financial crisis

“The coronacrisis – or more precisely, the response to that crisis – represents a physical (as opposed to financial) constraint on economic activity that is unprecedented in postwar history,” the investment bank said in a note to its clients published late Sunday.

It sees the real GDP in advanced economies contracting “very sharply” in the second quarter, including a 24% drop in the U.S. Such a drop would be two-and-a-half times as large as the previous post-war record and would contribute to a 1% contraction in global GDP in 2020, Goldman Sachs said.

On the other hand, Bank of America Corp. also expects the U.S. economy to drop by nearly 25% in the second, according to Bloomberg, while JPMorgan Chase & Co. Projects a 14% decline.

Economists have said a worldwide recession is already here, the first since the 0.8% contraction in 2009.

Social distancing measures over the last several days have shut down normal life in much of the U.S. as well as other parts of the world, and sudden surges in layoffs have been reported along with a collapse in spending.

The president of the Federal Reserve Bank of St. Louis told Bloomberg Sunday that the unemployment rate in the U.S. may hit 30% in the second quarter of this year due to the shutdowns to tackle the pandemic.

James Bullard's ballpark estimate is that unemployment could be higher than in the Great Depression and three times more than the 2007-2009 recession. He also said the GDP could plummet 50%.

With companies announcing layoffs and new problems raising debt, markets have ignored most macroeconomic figures. But U.S. weekly jobless figures, due on Thursday, are expected to show as many as 750,000 new claims.

Fears about the extent of the coronavirus-related hit to corporate America have erased more than $9 trillion from the S&P 500 since its record high last month, with U.S. stock indexes ending Friday with their worst week since the global financial crisis.

Adding to the pessimism, a $1-trillion-plus coronavirus response bill failed to get through the first procedural hurdle in the U.S. Senate on Sunday night, raising further questions about the White House's ability to effectively halt the spread of the outbreak.

Nearly one in three Americans have now been ordered to stay home, foreshadowing a further dent to economic activity. Starting Monday, the New York Stock Exchange will fully shift to electronic trading.

In a series of sweeping steps, the Fed on Monday said it will lend up to up to $300 billion to small and large businesses and local governments as well as extend its bond-buying programs amid efforts to blunt the economic damage from the coronavirus.

After already aggressively easing monetary policy this month, including sending interest rates to near zero, the central bank said it would now lend against student loans and credit card loans as well as buy bonds of larger employers.

“They are throwing everything in the kitchen sink,” Scott Brown, chief economist at Raymond James in St. Petersburg, Florida, told Reuters.

“These efforts alone are not going to do anything against the virus – that’s the big problem. It will help but we still need fiscal stimulus and we need a lot of it. We need it geared toward the people who are going to be really suffering," he said.

The statement said the effort was taken because "it has become clear that our economy will face severe disruptions."

The Fed said it will set up three new lending facilities that will provide up to $300 billion by purchasing corporate bonds, buying a wider range of municipal bonds, and purchasing asset-backed securities.

It also said it will buy an unlimited amount of Treasury bonds and mortgage-backed securities in an effort to hold down interest rates and ensure those markets function smoothly.

Other financial markets around the world also took another hammering on Monday. European stocks dived 4.5% as they reopened and commodity markets also saw more heavy selling.

London's FTSE 100 dropped 4.2% as a raft of U.K.-based companies laid out expected hits to profit, cuts in spending and the potential for trouble with rising debt.

The blue-chip index sank back into the red after a two-day bounce due to the extraordinary stimulus unveiled by governments and central banks in the U.K. and beyond last week.

The index was down 35% from its peak in January and on course for its worst monthly performance since 1987, while the FTSE MID 250 index of midcap stocks were down over 40% from its all-time high.

Investors tried to take cover in ultra-safe government bonds and in the Japanese yen in currency markets but with so much uncertainty about when any semblance of normality might return there were few places to really hide.

UBS Australian head of equities distribution George Kanaan said global financial markets were gripped by fear, which seemed unlikely to ease any time soon, despite the coordinated efforts of governments and central banks around the world.

“I have been in the financial markets for 27 years and I have never seen anything like this,” he told Reuters by telephone from Sydney. “This is unprecedented in terms of fears, and there are two elements driving that."

In Asian trade, MSCI’s broadest index of Asia-Pacific shares outside Japan lost 5.4%, with New Zealand’s market shedding a record 10% at one point as the government closed all non-essential businesses.

Shanghai blue chips dropped 3.3%, though Japan’s Nikkei rose 2% aided by expectations of more aggressive asset-buying by the Bank of Japan. In Australia, the S&P/ASX200 dropped 5.62% to take the index to a seven-year low.

In currency markets, the first instinct on Monday was to dump those leveraged to global growth and commodity prices, sending the Australian dollar down 0.8% to $0.57.

The U.S. dollar started firm but took a step back after partisan battles in the U.S. Senate stopped a coronavirus response bill from advancing.

The dollar had been a major gainer last week as investors fled to the liquidity of the world's reserve currency, while some funds, companies and countries desperately sought more cash to cover their dollar borrowings.