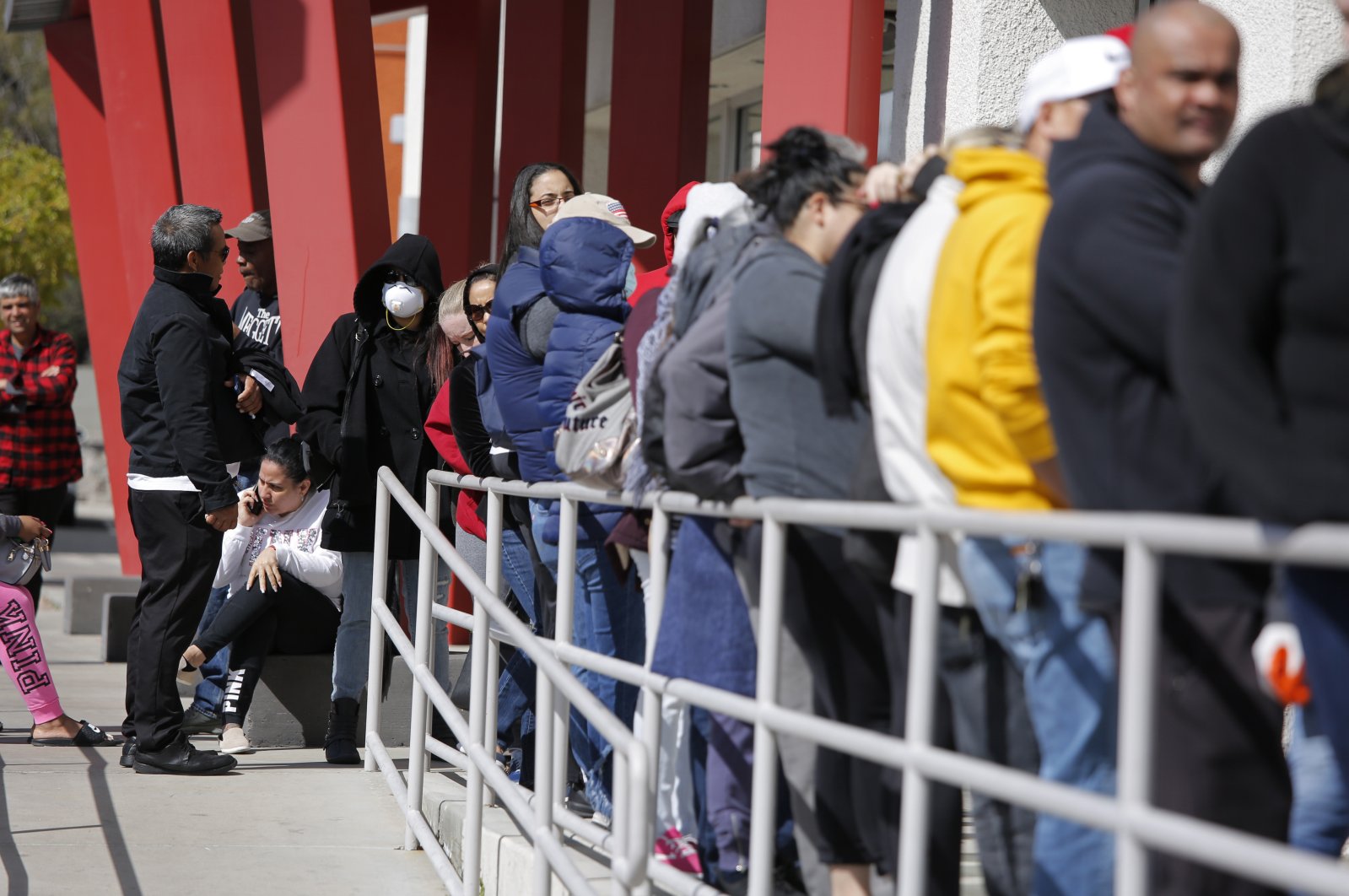 The figures come one day before the government’s jobs report for May is expected to show that employers slashed 8 million jobs last month and that the unemployment rate jumped from 14.7% to 19.8%, the highest figure since the Great Depression

Nearly 1.9 million people applied for U.S. unemployment benefits last week, the ninth-straight decline since applications spiked in mid-March, a sign that the gradual reopening of businesses has slowed the loss of jobs.

New claims for state unemployment benefits totaled a seasonally adjusted 1.87 million for the week ended May 30, down from 2.13 million the prior week, bringing the running total to over 42 million since coronavirus shutdowns took hold in mid-March, the Labor Department reported Thursday. Economists had forecast 1.8 million initial claims in the latest week.

New jobless claims have declined since hitting a record of 6.87 million in late March.

The diminishing pace suggests that the job market meltdown that was triggered by the coronavirus may have bottomed out as more companies call at least some of their former employees back to work.

The total number of people who are now receiving jobless aid rose only slightly to 21.5 million, suggesting that rehiring is offsetting some of the ongoing layoffs.

Though applications for benefits are slowing, the latest weekly number is still more than double the record high that prevailed before the viral outbreak. It shows that there are limits to how much a partial reopening of the economy can restore a depressed job market mired in a recession.

With all states in the process of gradually reopening for business, more consumers are starting to return to restaurants, stores and hair salons. That trend has boosted consumer spending from exceedingly low levels and has likely encouraged some companies to hire again.

In addition to the laid-off employees who applied for benefits last week, 623,000 others sought jobless aid under a new program for self-employed and gig workers, who now qualify for unemployment benefits for the first time. These figures aren’t adjusted for seasonal variations, so the government doesn’t include them in the overall data.

The figures come one day before the government’s jobs report for May is expected to show that employers slashed 8 million jobs last month and that the unemployment rate jumped from 14.7% to 19.8%. If those forecasts prove accurate, it would mean that nearly 30 million people have lost jobs since the viral outbreak intensified in March and that joblessness has reached its highest point since the Great Depression.

Since mid-March, 42.7 million people have applied for unemployment benefits. Not all of these are still unemployed, though, with a number having been rehired. Meanwhile some, it turns out, filed duplicate applications for benefits as they struggled with the unresponsive state unemployment systems.

Thursday’s report wasn’t affected by the protests over the killing of George Floyd, which in recent days has forced some major retailers and small businesses to close, because it covers claims filed only through May 30. But some economists warn that applications for unemployment aid could rise in next week’s report, reflecting business closures amid the protests and scattered vandalism.

The depth of the job cuts since the virus forced the widespread shutdown of businesses reflects an economy gripped by the worst downturn since the Great Depression. The economy is thought to be shrinking in the April-June quarter at an annual rate approaching 40%. That would be, by far, the worst quarterly contraction on record.

Still, real-time private data on consumer behavior is showing signs that the economy is gradually reviving. Credit and debit card spending tracked by Chase Bank shows that consumer spending, though roughly flat last week, rebounded from its low point in mid-April when it was 40% below year-ago levels. Now, it is down 20% from a year ago.

Surveys have also shown manufacturing and services industries stabilizing albeit at low levels in May, indicating the downturn triggered by the shutdown was bottoming. Many businesses had reopened by mid-May.

Economists said the stubbornly high number of unemployment claims comes from a second wave of layoffs, as businesses navigate weak demand, as well as some lingering backlogs at state unemployment offices overwhelmed by the flood of applications early in the shutdown.

"Many of the new claims reflect current layoffs, as the corporate sector more broadly begins to adjust to the altered outlook for the year ahead," said Lou Crandall, chief economist of Wrightson ICAP LLC in Jersey City, New Jersey. "Even as the economy begins to reopen, new job losses continue to pile up."

Economists caution that most Americans will need to feel more confident about returning to their former habits of shopping, traveling and eating out before the economy can sustain any meaningful recovery. That will likely require the availability of a vaccine or a significant increase in testing.

“What’s really going to move the needle economically is when consumers and businesses feel comfortable re-engaging with the economy the way they did before COVID-19,” said Adam Kamins, a senior regional economist at Moody’s Analytics.

Some businesses that have reopened have seen only a limited number of customers so far.

In Chattanooga, Tennessee, Nneka Ijeoma lost her job as a bartender at a whiskey bar when it closed in March. Though the bar has reopened, it has rehired only two of its 17 employees. In the meantime, Ijeoma is receiving $275 in state unemployment benefits each week, plus $600 a week in federal benefits.

“We were honestly so blessed by that,” she said of the federal aid, which will expire at the end of July. “I wouldn’t have been able to get by on $275.”

Still, she is eager to return to work and to go back to school in the fall to finish her college degree. Yet she always regarded bartending as a long-term opportunity.

“I always thought I could work in hospitality forever,” she said. “I thought it was recession-proof.”