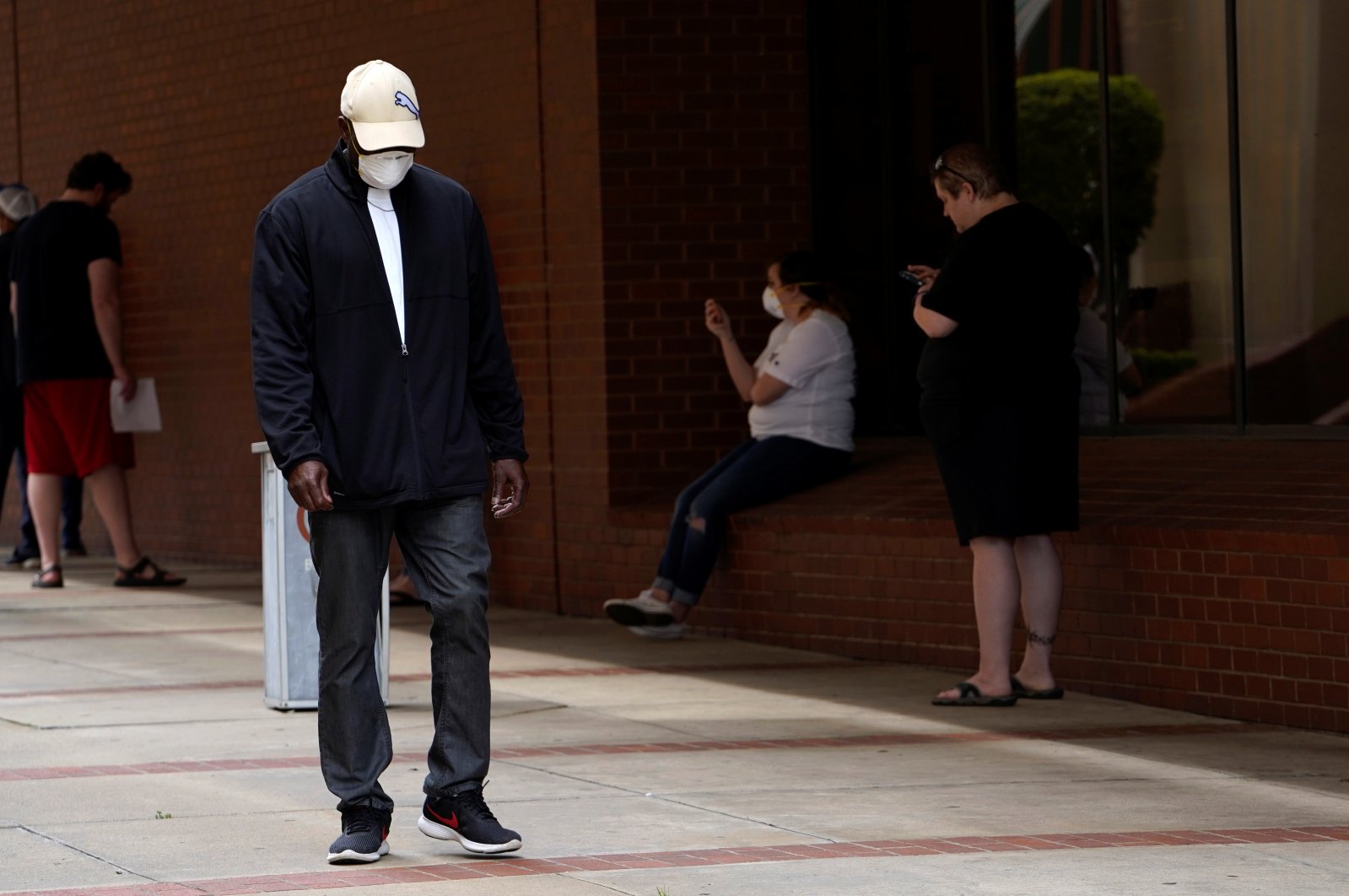 A man who lost his job walks past others as they wait in line to file for unemployment during the coronavirus pandemic, at an Arkansas Workforce Center in Fort Smith, Arkansas, U.S., April 6, 2020. (Reuters Photo)
by Compiled from Wire Services May 08, 2020 12:39 pm

The collapse of the U.S. job market reflects what has become a severe recession with nearly all the job growth achieved during the 11-year recovery from the Great Recession being lost in one month

The U.S. unemployment rate hit 14.7% in April, the highest rate since the Great Depression, as 20.5 million jobs vanished in the worst monthly loss on record. The figures are stark evidence of the damage the coronavirus has done to a now-shattered economy.

The losses reflect what has become a severe recession caused by sudden business shutdowns in nearly every industry. Nearly all the job growth achieved during the 11-year recovery from the Great Recession has now been lost in one month.

The government’s report Friday noted that many people who lost jobs in April but didn’t look for another one weren’t even counted in the unemployment rate. The impact of those losses was reflected in the drop in the proportion of working-age Americans who have jobs: Just 51.3%, the lowest on record.

In addition to the millions of newly unemployed, 5.1 million others had their hours reduced in April. That trend, too, means less income and less spending, perpetuating the economic downturn. A measure of what’s called underemployment – which counts the unemployed plus full-time workers who were reduced to part-time work – reached 22.8%, a record high.

Though some businesses are beginning to reopen in certain states, factories, hotels, restaurants, resorts, sporting venues, movie theaters and many small businesses are still largely shuttered. As companies have laid off tens of millions, lives have been upended across the country.

The numbers strengthen analysts' expectations of a slow recovery from the recession caused by the pandemic, adding to a pile of bleak data on consumer spending, business investment, trade, productivity and the housing market in underscoring the devastation unleashed by lockdowns imposed by states and local governments in mid-March to slow the spread of COVID-19, the respiratory illness caused by the virus.

Economists polled by Reuters had forecast nonfarm payrolls diving by 22 million. Data for March was revised to show 870,000 jobs lost instead of 701,000 as previously reported. A record streak of job growth dating to October 2010 ended in March. The unemployment rate was forecast rising to 16% from 4.4% in April.

Though millions of Americans continue to file claims for unemployment benefits, April could mark the trough in job losses. More small businesses are accessing their portion of an almost $3 trillion fiscal package, which made provisions for them to get loans that could be partially forgiven if they were used for employee salaries.

The Federal Reserve has also thrown businesses credit lifelines and many states are also partially reopening.

Job losses and pay cuts are ranging across the world. Unemployment in the 19-country eurozone is expected to surpass 10% in coming months as more people are laid off. That figure is expected to remain lower than the U.S. unemployment rate. But it doesn't count many people who either are furloughed or whose hours are cut but who receive most of their wages from government assistance.

In France, about half the private-sector workforce is on a government paid-leave program whereby they receive up to 84% of their net salary. In Germany, 3 million workers are supported in a similar system, with the government paying up to 60% of their net pay.

In the five weeks covered by the U.S. jobs report for April, a total of 26.5 million people applied for unemployment benefits and 16.2 million were on unemployment rolls through the week of April 12, when the government canvassed establishments and households for payrolls and the unemployment rate.

The job loss reported Friday was a smaller figure because the two are measured differently: The government calculates job losses by surveying businesses and households. It’s a net figure that also counts the hiring that some companies, like Amazon and many grocery stores, have done. By contrast, total jobless claims are a measure of just the layoff side of the equation.

For the United States, a key question is where the job market goes from here. Applications for unemployment aid, while high, have declined for five straight weeks, a sign that the worst of the layoffs has passed. Still, few economists expect a rapid turnaround.

"Given the expected shift in consumer behavior reflecting insecurities regarding health, wealth, income, and employment, many of these firms will not reopen or, if they do reopen, hire fewer people," said Steve Blitz, chief economist at TS Lombard in New York. "This is one reason why we see the underlying recession extending through the third quarter."

The Congressional Budget Office has forecast that the unemployment rate will still be 9.5% by the end of next year. A paper by economists at the San Francisco Federal Reserve estimates that under an optimistic scenario that assumes shutdowns are lifted quickly, the unemployment rate could fall back to about 4% by mid-2021.

But if shutdowns recur and hiring revives more slowly, the jobless rate could remain in double-digits until the end of 2021, the San Francisco Fed economists predict.

Raj Chetty, a Harvard economist, is tracking real-time data on the economy, including consumer spending, small business hiring and job postings. Chetty noted the economy’s health will hinge on when the viral outbreak has subsided enough that most Americans will feel comfortable returning to restaurants, bars, movie theaters and shops.

The data suggests that many small businesses are holding on in hopes that spending and the economy will rebound soon, he said. Small business payrolls have fallen sharply but have leveled off in recent weeks. And job postings haven’t dropped nearly as much as total jobs have. But it’s unclear how much longer those trends will persist.

“There’s only so long you can hold out,” Chetty said.