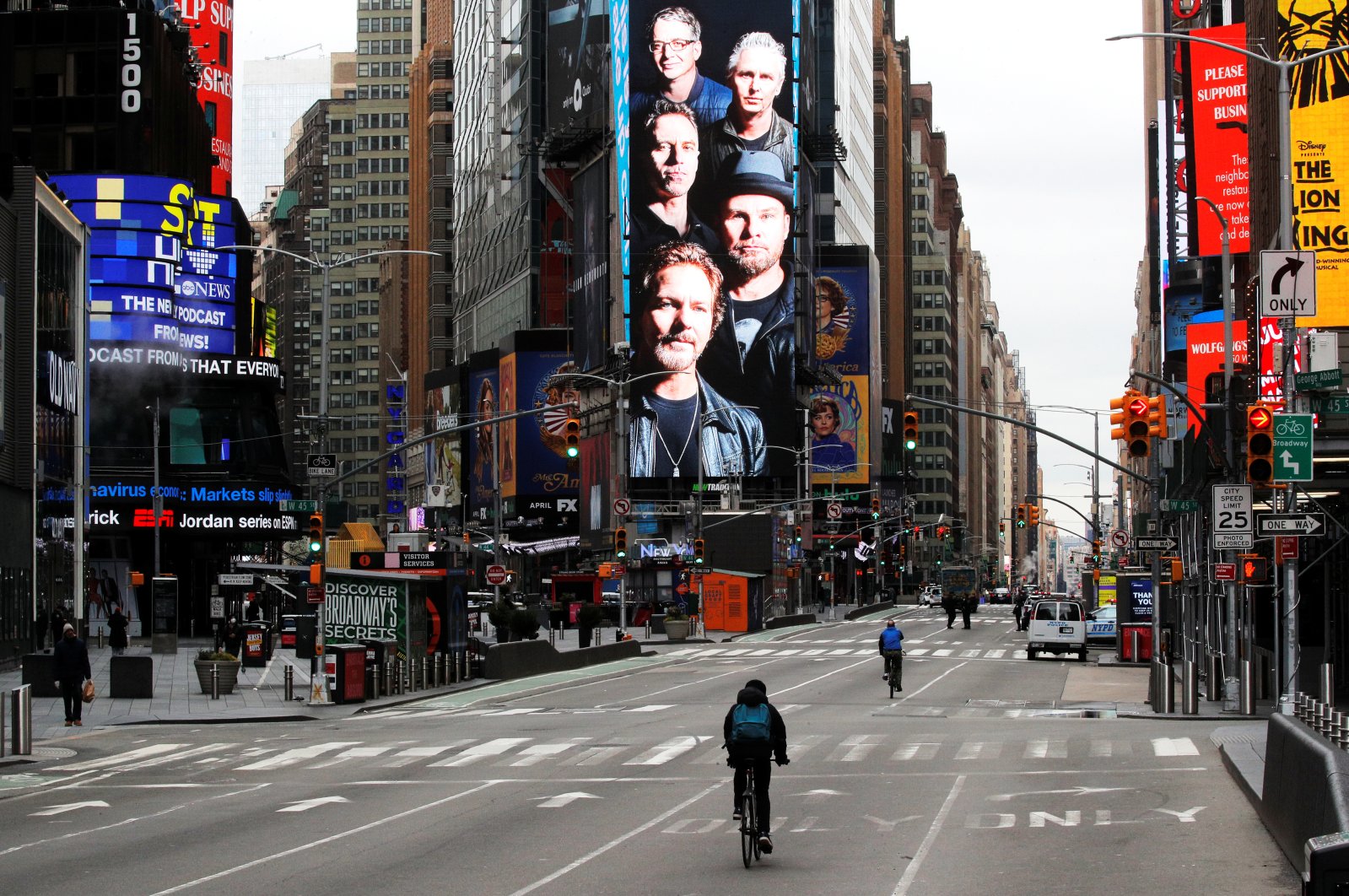 The U.S. economy has now suffered nearly 10 million layoffs in just the past several weeks as the devastation the pandemic is wreaking on the global economy worsens

The number of Americans filing claims for unemployment benefits last week shot to a record high of more than 6 million, doubling a record high set just one week earlier, a sign that layoffs are accelerating in the midst of the coronavirus pandemic, which economists say has pushed the global economy into a severe recession.

The stunning report Thursday from the U.S. Labor Department, the most timely data on the economy’s health, showed that job cuts are mounting against the backdrop of economies in the U.S. and abroad that have almost certainly sunk into a severe recession as businesses close across the world.

Initial claims for state unemployment benefits surged by 3.34 million to a seasonally adjusted 6.65 million for the week ending March 28, the government said. Data for the prior week was revised to show 24,000 more applications received than previously reported, lifting the number to 3.31 million.

Combined with last week's report, the U.S. economy has now suffered nearly 10 million layoffs in just the past several weeks – far exceeding the figure for any corresponding period on record.

Some of last week's jobless claims are likely delayed filings from the previous week when state offices that handle unemployment benefits were overwhelmed by a surge of online and telephone claims.

The accelerating layoffs have led many economists to envision as many as 20 million lost jobs by the end of April. That would be more than double the 8.7 million jobs lost during the Great Recession. The unemployment rate could spike to as high as 15% this month, above the previous record of 10.8% set during a deep recession in 1982.

Initial jobless claims rocketed as stay-at-home orders to stop the spread of the pandemic – now affecting more than 80% of Americans in 39 states – have forced large and small businesses to curtail output or shut altogether.

Florida, Georgia, Mississippi and Nevada told residents to stay home Wednesday, when the death toll soared by 925 to more than 4,800 nationwide. Confirmed U.S. cases climbed to 214,000, nearly double that of Italy, with the second most.

Many employers are slashing their payrolls to try to stay afloat because their revenue has collapsed, especially at restaurants, hotels, gyms, movie theaters and other venues that depend on face-to-face interaction. Auto sales have sunk, and factories have closed.

The White House and Congress expanded the unemployment benefits system in last week's $2.2 trillion economic rescue package. That legislation added $600 a week in jobless aid, on top of what recipients get from their states. This will enable many lower-income workers to manage their expenses and even increase their purchasing power and support the economy.

Globally, the number of confirmed infections approached 1 million with nearly 47,000 fatalities, led by Italy with over 13,000 dead.

U.S. stock indexes fell at the open on Thursday following the data.

The dollar did not change much against a basket of currencies. U.S Treasury prices were trading higher.

Applications for unemployment benefits peaked at 665,000 during the 2007-2009 recession when 8.7 million jobs were lost. Economists say the country should brace for jobless claims to continue escalating, partly citing generous provisions of a historic $2.2 trillion fiscal package signed by President Donald Trump last Friday and the federal government's easing of requirements for workers to seek benefits.

As a result, self-employed and gig workers who previously were unable to claim unemployment benefits are now eligible. In addition, the unemployed will get up to $600 per week for up to four months, which is equivalent to $15 per hour for a 40-hour workweek. By comparison, the government-mandated minimum wage is about $7.25 per hour and the average jobless benefits payment was roughly $385 per person per month at the start of this year.

"Why work when one is better off not working financially and healthwise?" said Sung Won Sohn, a business economics professor at Loyola Marymount University in Los Angeles.

Last week's claims data has no bearing on the closely watched employment report for March, which is scheduled for release on Friday. For the latter, the government surveyed businesses and households in the middle of the month, when just a handful of states were enforcing "stay-at-home" or "shelter-in-place" orders.

It is, however, a preview of the carnage that awaits. Retailers, including Macy's, Kohl's Corp. and Gap Inc., said Monday that they would furlough tens of thousands of employees, as they prepare to keep stores shut for longer.

According to a Reuters survey of economists, the government report Friday is likely to show nonfarm payrolls dropped by 100,000 jobs last month after a robust increase of 273,000 in February. The unemployment rate is forecast to rise three-tenths of a percentage point to 3.8% in March.

"A rough look at the most affected industries suggests a potential payroll job loss of over 16 million jobs," said David Kelly, chief global strategist at JPMorgan Asset Management in New York. "The loss would be enough to boost the unemployment rate from roughly 3.5% to 12.5%, which would be its highest rate since the Great Depression."

Thursday's claims report also showed the number of people receiving benefits after an initial week of aid jumped 1.25 million to 3.03 million for the week ended March 21, the highest since July 6, 2013.

Kathryn Lickteig, a cook in Kansas City, signed up for unemployment compensation last week after the city shut down dine-in restaurants. She is hopeful that the extra $600 will help her ride out the shutdown instead of having to look for an interim job.

“It has eased my mind so much," she said. “I do not have to actively go out and expose myself to the public and possibly get sick. I can stay home now and do my part in social distancing.”

The legislation will also help fund unemployment benefits for workers whose hours have been cut. That would enable these people to replace some of their lost income with unemployment aid even as they keep their jobs.

Typically, people who receive jobless aid are required to actively look for a new job and to document their searches. But Congress has passed other legislation that encourages states to drop that requirement, given that so many businesses are closed, and most Americans have been ordered to stay mostly at home.

Mark Zandi, chief economist at Moody's Analytics, said this week that just 6% of companies surveyed by Moody's say they’re hiring – down dramatically from 40% in the weeks preceding the coronavirus outbreak. The plunge in hiring underscores the difficulty that anyone out of work would have in finding a new job.

Numerous state unemployment agencies have struggled to keep up with the flood of applications for jobless benefits. New York's Labor Department asks people to file on different days depending on their last names. Monday, for example, is reserved for those last names that start with A through F.