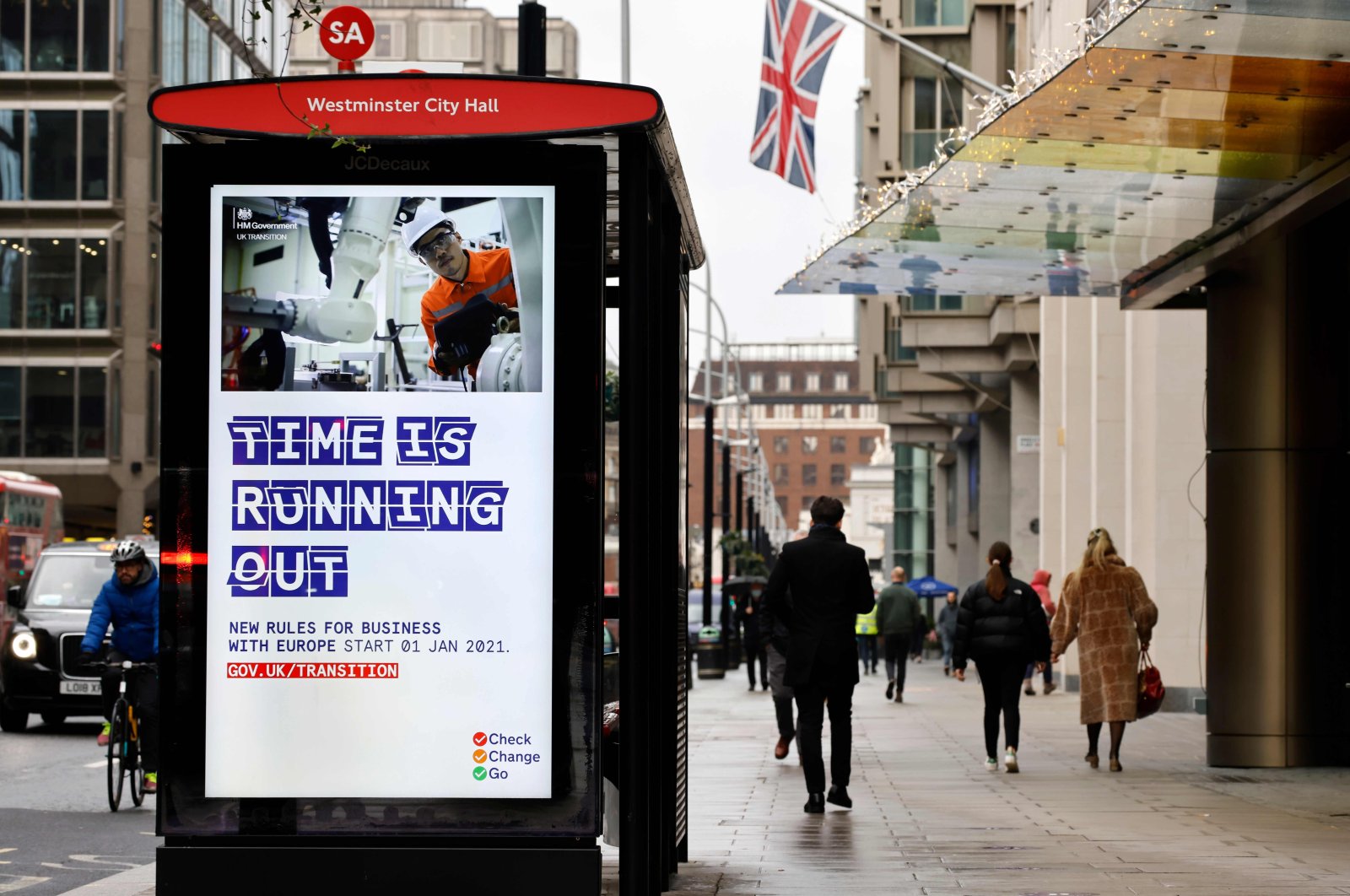 Pedestrians walk past an BTier 2 Coronavirus information displayed on an electronic advertising board at a bus stop in central London, U.K., Dec. 14, 2020. (AFP Photo)
by Agencies Dec 14, 2020 4:40 pm
RECOMMENDED

European Union chief negotiator Michel Barnier said Monday he still firmly believes that a post-Brexit trade agreement is possible and whittled down the major outstanding disputes to be settled ahead of the new year to just two.

Britain, meanwhile, said the negotiations now taking place in Brussels could continue for some time yet and indicated it was not planning to pull the plug on the talks as long as progress was possible.

The EU and British negotiators are on the “very last mile” in negotiations for a trade accord, and the architecture in place is “fine” but details remain, European Commission President Ursula von der Leyen said Monday.

“We are on the very last mile,” she was cited by Reuters as telling an Organisation for Economic Co-operation and Development (OECD) event via video link.

“We want a level playing field, not only at the start but also over time ... this is the architecture that we are building,” she said. “We're fine about the architecture itself but the details, do they really fit?”

A senior EU diplomat who attended a closed-door briefing by Barnier on the state of play in Brussels said the tortuous trade talks could collapse, but for now “the patient is still alive.”

“There might now be a narrow path to an agreement visible – if negotiators can clear the remaining hurdles in the next few days,” another EU diplomat said, adding that success depends on London accepting “inherent trade-offs” for a fair deal.

Barnier said the nine-month negotiations had come down to finding some agreements on fair-competition rules and fishing rights, no longer mentioning the issue of legal mechanisms for resolving future disputes.

“Two conditions are not met yet,” he said as he entered a meeting to brief the EU’s 27 nations on progress in the talks.

He is expected to continue negotiations with his U.K. counterpart, David Frost, later on Monday.

“This deal, it is still possible,” he added.

In Britain, Business Secretary Alok Sharma said, “the fact that we’re continuing to have this discussion shows that there is an opportunity to try and make some progress."

“Our intention is not to walk away. We will continue to talk as long as there is the possibility of reaching a deal,” he was cited as saying by The Associated Press (AP).

French Finance Minister Bruno Le Maire said Monday Britain has the most to lose from Brexit.

“The British people will be the biggest losers from Brexit,” he said, calling Brexit “a political, economic and historical folly.”

“Negotiations continue although all deadlines have been broken, and we think this is the right thing to do,” Maas said.

“At the same time, we are stepping up preparations for a no-deal scenario,” he added.

Both sides are teetering on the brink of a no-deal Brexit departure but have committed to a final push ahead of Jan. 1, when a transitional period following Britain's Jan. 31 departure from the bloc is to end.

On Sunday, British Prime Minister Boris Johnson and von der Leyen ditched a self-imposed deadline and promised to “go the extra mile” to clinch a post-Brexit trade agreement that would avert New Year’s chaos and costs for cross-border commerce.

Senior EU diplomats, who spoke on condition of anonymity after taking part in Barnier’s closed-door briefing, said the negotiator relayed some limited progress on how to settle any future trade disputes but was “guarded” on prospects for a deal.

The sides remained at odds over state aid provisions and have moved further apart again on fisheries, with the EU rejecting the U.K.’s proposal for a three-year transition period from 2021 on access to British waters, they said.

“Patient still alive ... but keep the undertaker on speed dial,” said one diplomat on how the talks were going.

With traffic jams already hampering access to cross-channel ports like Dover in England and Calais in northern France, the time pressure should start to have an impact, specifically on London, said Fabian Zuleeg, head of the EPC think tank.

“We are seeing the lorries queuing. We are seeing that there are difficulties with some of supply chains. We’re seeing also that business is extremely unhappy about still being in a high degree of uncertainty with only a few days to go,” Zuleeg told AP.

Barnier is willing to accept British trade with no tariffs or quotas but only if the U.K respects the rules and regulations that have made the EU's single market of 450 million consumers so successful.

“Free and fair competition, fair and free, equitable and open, the two go together," Barnier said.

Johnson, however, says he does not want British business to be hemmed in by EU restrictions, especially if those restrictions would have to be progressively adapted to higher mainland standards in the future.

On fisheries, Barnier demanded “an agreement that guarantees a reciprocal, I insist, reciprocal access to markets and waters."

EU fishermen are keen to keep working in British waters, and the U.K. seafood industry is extremely dependent on exports into the 27-nation bloc.

Johnson has made fisheries and U.K. control over its waters a key demand in the long saga of Britain's departure from the EU. It has been 4 1/2 years since Britons voted narrowly to leave the EU and – in the words of the Brexiteers’ slogan – “take back control” of the U.K.’s borders and laws.

Johnson said over the weekend the “most likely” outcome was that the two sides wouldn’t reach a deal and would trade on World Trade Organization (WTO) terms, with the tariffs and barriers that would bring.