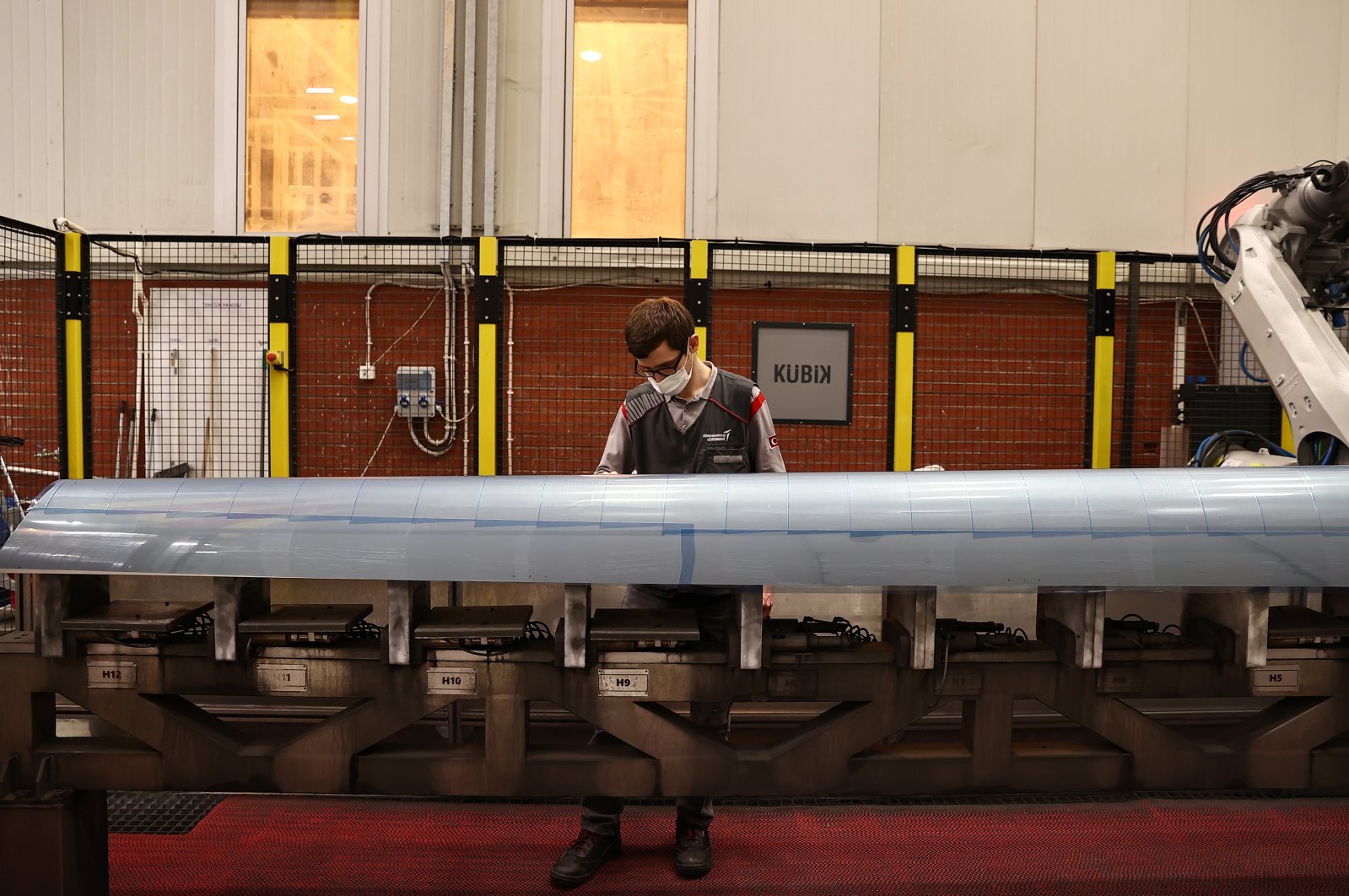 A worker is seen at the Turkish Aerospace Industries’ composite factory in the capital Ankara, Turkey, Jan. 13, 2021. (AA Photo)
by DAILY SABAH WITH AGENCIES Jan 13, 2021 10:21 am
RECOMMENDED

Analysts say the data indicated a strong rebound in the last quarter of 2020.

In a Reuters poll, the annual growth in output was forecast to be 9.55%. A survey by a group of economists from Anadolu Agency (AA) projected an 8.3% year-on-year increase.

The first COVID-19 infection was recorded in Turkey in March, and many factories halted operations soon after, leading to production falls of 31.4% in April and 19.9% in May, before a period of recovery started in June.

Elaborating on the data, Industry and Technology Minister Mustafa Varank said the unexpected increase came despite “all the difficulties.”

“In November, we became one of the countries that increased industrial production the most. Our goal is to continue this course in production in 2021 as well,” Varank said on Twitter.

Turkish stocks increased by another 1% to a record high after the data. The Turkish lira also outpaced its peers, adding as much as 0.6%.

The manufacturing index posted the best performance among industrial subsectors in November 2020, shooting up 11.6% from the same month in the previous year, TurkStat said in a statement.

The electricity, gas, steam and air conditioning supply index rose 7.5%, while the mining and quarrying index went up slightly, by 4.6%, during the same period.

On a monthly basis, the manufacturing index again posted the largest rise with 1.5%, followed by the mining and quarrying as well as electricity, gas, steam and air conditioning supply indices, by 0.3% and 0.1%, respectively.

Industrial output is deemed a vital indicator for the economy in order to preliminarily gauge gross domestic product (GDP) growth.

Turkey’s economy roared to a more-than-expected 6.7% growth rate in the third quarter, after contracting by 9.9% in the previous three months when lockdowns were imposed to curb the initial COVID-19 wave.

“With the reforms in the fields of judiciary and economy that we are preparing to implement, and the positive developments in vaccination studies, 2021 will hopefully be a leap year for Turkey,” Varank said.

Enver Erkan, an economist at Istanbul-based private investment firm Tera Yatırım, said the rapid recovery that started in the third quarter following a lockdown period was reflected in the October and November figures.

The positive outlook that extended to the fourth quarter will positively affect the overall economic growth of the last quarter and will enable Turkey to close the year with positive growth, Erkan said in a note.

“We estimate a growth close to 1% throughout the year,” he noted.

“Keeping production channels open will make the (manufacturing) sector appear more positive at a time when the effects of virus-related restrictions are seen,” Erkan added.

Government steps such as keeping credit channels loose accompanied by sound industrial production figures will help the country see a positive growth rate for 2020, he stressed.

“The slowdown in global economies due to the quarantine measures, monetary tightening and the rise in interest rates may cause a stagnation effect as of the first quarter of 2021,” he cautioned.

Tuvey said the figures indicated that the rapid recovery in the July-September period continued into the first two months of the last quarter.

Just like Tuvey, AA financial analyst and economist Haluk Bürümcekçi stressed that the momentum of the third quarter, as well as rapid credit growth and the lifting of quarantines, was maintained in the middle of the last quarter.

Output in eurozone better than expected

Elsewhere, eurozone industrial production was much higher than expected in November, data showed Wednesday, thanks to a rebound in the output of intermediate and capital goods that bode well for investment later in 2021.

The European Union’s statistics office, Eurostat, said industrial output in the 19 countries sharing the euro rose 2.5% in November against October with a 0.6% year-on-year decline.

Economists polled by Reuters had expected a modest 0.2% monthly rise and a 3.3% annual fall, as the eurozone economy grapples with the second wave of the COVID-19 pandemic.

“Industry continues to recover from the first wave, despite all of the second-wave problems that the economy is currently facing. At the moment, production is less than 1% below pre-coronavirus levels, which is a remarkable feat in and of itself,” said Bert Colijn, a eurozone economist at ING Bank.

“For now ... industry has turned out to be the euro zone’s dark horse, cushioning the fourth-quarter blow from the second wave (of the COVID-19 pandemic) substantially,” Colijn said in a note.

Ireland was the clear outlier, with a 52.8% surge in industrial output in the month, which the Irish statistics office said was caused by revisions of seasonal adjustment models because of the COVID pandemic. Production also rose in Germany but was down in France, Italy, Spain and the Netherlands.

The better-than-anticipated result was mainly due to a 7.0% monthly increase in the output of capital goods and a 1.5% monthly rise in intermediate goods, which helped offset falls in the production of energy and durable and non-durable consumer goods.

Also year-on-year, capital goods production rose 0.1% in November after an 8% year-on-year slump in October. Intermediate goods output was up 1.1% after a 0.9% fall in October.

“Especially encouraging was the strong surge in capital goods production ... While investment has been very weak over the course of 2020, this is an encouraging sign for the end-of-year performance,” Colijn said.