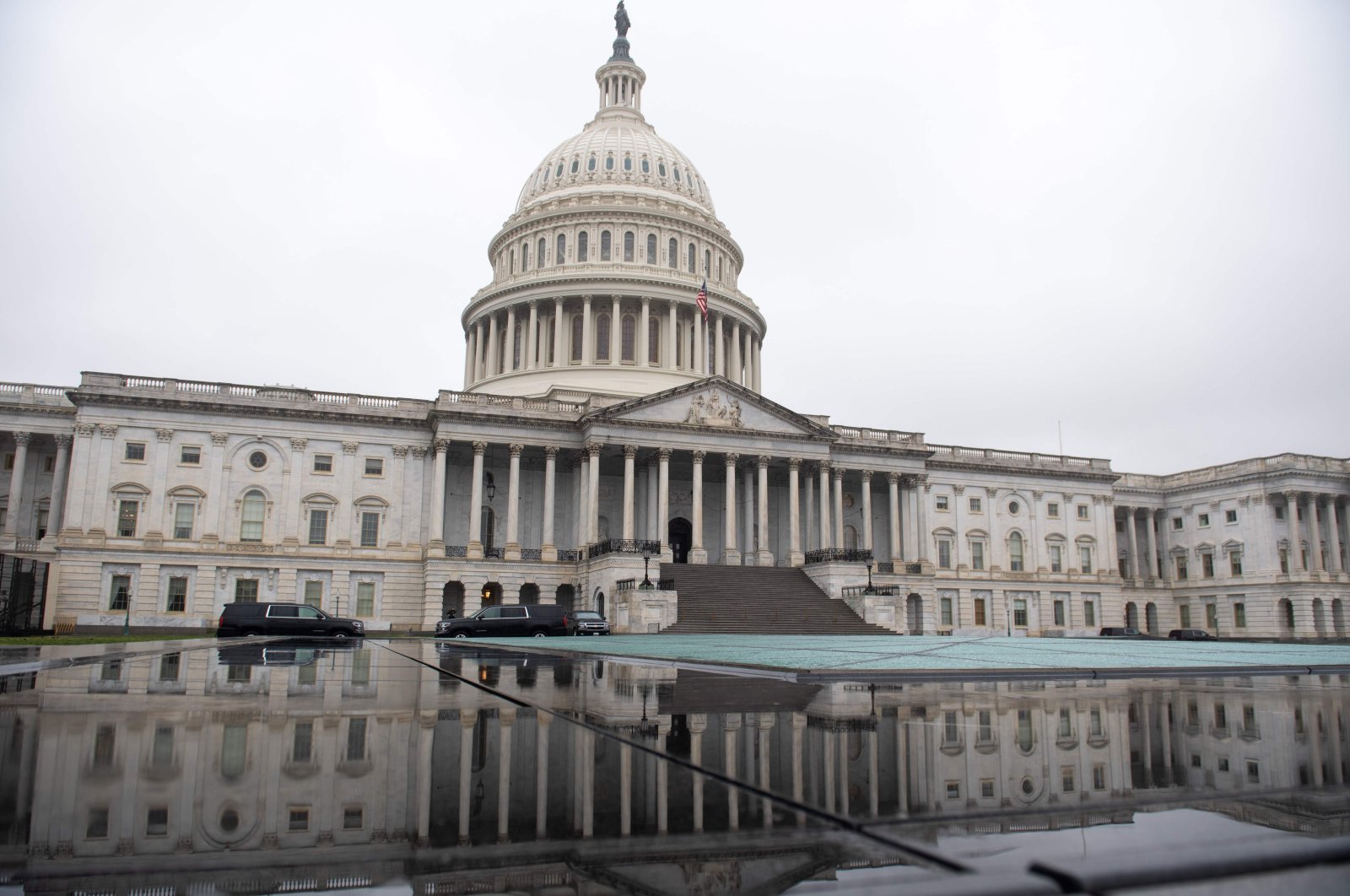 U.S. Capitol seen as the Senate continues negotiations on a relief package in response to the outbreak of COVID-19, in Washington, March 23, 2020. (AFP Photo)
by Daily Sabah with Wires Mar 25, 2020 9:13 am
RECOMMENDED

After days of arguing, the White House and Senate leaders announced early Wednesday they have reached an agreement on a massive economic stimulus bill that will unleash more than $2 trillion in spending and tax breaks to alleviate the impact of the coronavirus outbreak.

“At last, we have a deal,” said Senate Majority Leader Mitch McConnell, a key negotiator, from the floor of the Senate. “After days of intense discussions, the Senate has reached a bipartisan agreement on a historic relief package for this pandemic. It will rush new resources onto the front lines of our nation's health care fight. And it will inject trillions of dollars of cash into the economy as fast as possible to help American workers, families, small businesses and industries make it through this disruption and emerge on the other side ready to soar."

The agreement comes after days of mounting pressure and often intense haggling between Republican and Democratic lawmakers, Treasury Secretary Steven Mnuchin and other top aides to U.S. President Donald Trump.

The measure is “the largest rescue package in American history,” said Senate Democratic Leader Chuck Schumer, describing it as a “Marshall Plan” for hospitals and medical needs, referring to the U.S.-funded program that helped rebuild Europe after World War II. “Help is on the way, big help and quick help,” Schumer said.

McConnell was cited as saying that the package would rush checks to help Americans pay bills during job layoffs related to the outbreak, expand unemployment insurance and deliver emergency loans to small businesses. It would also “stabilize key national industries” and provide financial help for hospitals and health care providers struggling to get equipment for sick patients, he added.

The Senate was yet to release the final terms of the deal later Wednesday. Billed as a $2 trillion package, the rescue package was expected to include $500 billion in direct payments to people and $500 billion in liquidity assistance.

According to Reuters, other provisions were expected to include $350 billion for small-business loans and $250 billion for expanded unemployment aid.

Schumer said it also included $100 billion for hospitals and health systems, along with additional money for other health care needs. Another $150 billion would go to help state and local governments fight the outbreak.

Schumer told CNN Wednesday morning that he expected approval by the Republican-led Senate later in the day. That would leave final congressional approval up to the Democratic-controlled House, where the timetable for votes is unclear and whose members are mostly scattered around the country.

The global pandemic has killed more than 660 people in the United States and infected more than 50,000, shuttered thousands of businesses, thrown millions out of work and led states to order 100 million people – nearly a third of the population – to stay at home.

Even as the public health crisis deepened, Trump on Tuesday at the White House expressed eagerness to nudge many people back to work in the coming weeks and held out a prospect, based more on hope than science, that the country could be returning to normal in less than a month.

“We have to go back to work, much sooner than people thought,” Trump told a Fox News town hall. He said he'd like to have the country “opened up and just raring to go” by Easter, April 12. But in a White House briefing later, Trump said, "Our decision will be based on hard facts and data.”

Even before the deal was reached, news of the likely but elusive agreement had sent the stock market rocketing on Tuesday. The rescue package would be larger than the 2008 bank bailout and 2009 recovery act combined.

Stocks bounced back on Tuesday from three-year lows. The Dow Jones Industrial Average had burst 11.4% higher – its biggest one-day percentage gain since 1933 – and the S&P 500 scored a 9.4% jump – its 10th-best day on record out of 24,067 trading sessions since daily data started in 1927 – as a wave of buying around the world interrupted what has been a brutal month of nearly nonstop selling. Investors released some frustration that had pent up over days of watching the Senate stalemate over the crucial rescue package.

In the U.S., the benchmark S&P 500 is still nearly $8 trillion below its mid-February high, and investors expect more sharp swings.

Wall Street on Wednesday extended its massive bounce from the previous session.

Hopes that an incoming $2 trillion U.S. fiscal stimulus will ease the economic devastation caused by virus lockdowns gave world equity indexes their first back-to-back gains in a month, though it wasn’t plain sailing.

Europe’s main markets in London, Frankfurt and Paris were struggling to stay positive after tearing 4%-5% higher, and oil prices swung from 3% up to 3% down.

In the currency markets, the dollar slipped for a third straight session as the scramble for liquidity was soothed by the super-sized U.S. stimulus plan, though it was starting to look a little stronger again.