Why Turkey has most Starbucks branches of any European country, except UK 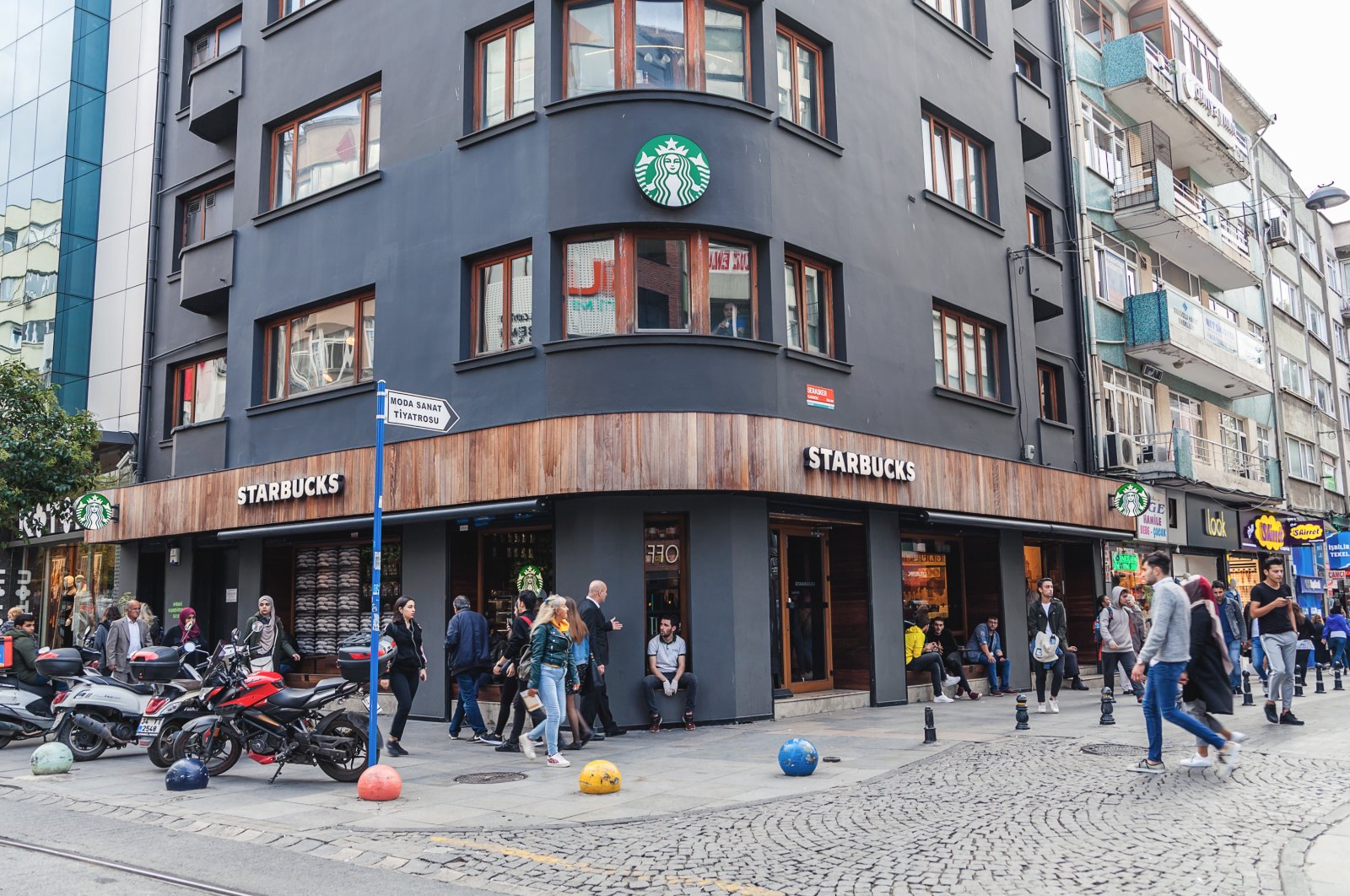 People are seen in front of a Starbucks coffee shop on the tourist street Bahariye in Kadiköy district on the Asian side of Istanbul, Oct. 4, 2018. (Shutterstock Photo)
by Ayşe Betül Bal
Oct 25, 2020 2:17 pm

When scrolling through Turkish social media you will inevitably come across the long-discussed debate over why there are so many Starbucks in Turkey. Why are the coffee chain's stores so popular in a country that has its own rich, unique, world-renowned local coffee culture?

The topic has been agonized over by social media users, dividing them into two camps: those critical of paying such high prices, comparing it to the same coffee one can drink elsewhere at more affordable prices and accusing the brand of being a tool for capitalism, and those who would fight tooth and nail for it, of which one can be sure Howard Schultz is unaware.

So, what is all the fuss about and what strategies did the world-famous coffee chain employ to conquer Turkish customers' hearts?

Most recently, the topic fueled conversation again when a 2020 graphic emerged showing the number of Starbucks branches per European country: Turkey ranked second after the U.K., outpacing countries like France, Spain, Germany and Greece. Although the size of the population should be taken into consideration, Italy still secured its position with nearly the lowest number of branches, only nine, which does not come as a surprise.

Certain local news sites even brought the subject up referencing a Turkish economist's 2019 comments discussing established terms such as conspicuous consumption as well as new ones such as the snob effect, without mentioning any brand name.

In a developing country like Turkey, conspicuous consumption can be observed in many segments of life and is not limited to the high schoolers hanging out in a Starbucks. It is a phenomenon prevalent throughout society, like when relatively lower-income citizens purchase the latest mobile phones, weighing themselves down with monthly payments.

This might be the case with Starbucks, although there are now many other coffee shops, particularly "third-generation” cafes that sell a cup of coffee at double the price of the chain brands.

When it comes to conspicuous consumption, professor Murat Çokgezen of Marmara University’s Economics Department argues that Starbucks is no longer on the table. He said that going to Starbucks has almost become a routine event for young people from many different neighborhoods and socioeconomic backgrounds.

Çokgezen emphasized that quite to the contrary, the brand presents equal service to all customers regardless of which neighborhood they live and that the easy accessibility to the same coffee at the same price, diminishes the opportunity for people to show off with it.

“It's not something that makes a difference to show off,” he said.

There is another, arguably more interesting, aspect from a marketing point of view that has made Turkey a great market for the brand and helped in securing its place.

First and foremost, when Starbucks Coffee International, a wholly-owned subsidiary of Starbucks Coffee Company, and its Turkish licensee, Kuwaiti-owned Shaya Kahve Sanayi and Ticaret A.Ş., began its partnership with its first Istanbul store in 2003 and its first two Ankara locations the following year, there weren't many local coffee chains in the country – something it still lacks.

According to several statistics, there are currently more than 31,000 Starbucks branches worldwide that the company operates or licensed, and over 500 of them are in Turkey. Starbucks ranks second worldwide in brand value after McDonald’s, valued at approximately $47.8 billion. The net revenue of the company has been maintaining its upward course between 2003 and 2019, except 2009 when it dropped year-on-year for the first time.

Çokgezen stressed: “It is true that there were not much chain stores in the country, however, the point is not chains at all. The point is the types of coffee that the brand presents and how they are presented. The coffee that Starbucks makes was not a familiar one in the country before. There was Turkish coffee and Turkish coffee alone. They have come up with an innovation, in terms of both taste and the way of consuming.”

The people’s preferences have changed, Çokgezen said, and “there were gaps in the market regarding the changing preferences of the consumers, the brand has filled the gap and people have adopted it.”

It offers a different kind of coffee Turkey previously didn't have, both in the quality of the product and the services, he said, noting that, “Italy, for example, may not need the brand or any other chains since even the smaller and local cafes are enabling consumers to achieve similar types of coffee at a relatively standard and predictable price, which is not the case in Turkey.”

Unlike the takeaway coffee concept brands like Starbucks, Turkey's coffee culture is rooted in tradition and requires a certain presentation, not quite addressing the needs of today's fast-living, fast-consuming civilization. A small cup of Turkish coffee is best enjoyed with a side treat of Turkish delight while catching up with friends, after a busy day at work or while gazing at the Bosporus – not necessarily meeting the needs of so-called modern people. It does not fit the concept of grabbing a hot cup on your way to work or suit online delivery, not to mention chain stores such as Starbucks now offer their own Turkish coffee, thanks to their customized business plans for the country, leaving little room for competition. Most local coffee stores do not provide take-away, which was considered unnecessary for a long time.

It would be unfair to say that the Seattle-based brand faced an uphill battle as it would encounter elsewhere in Europe, like Greece or Sweden that has already been saturated by local chain stores. In the U.K., which is the only country that outpaces Turkey on the European scale, the market is more open to competition with its local chain Costa established by Italian brothers Bruno and Sergio in 1971 that was recently acquired by Coca-Cola in 2018.

"The early and rapid acceptance of the Starbucks brand in Istanbul has greatly inspired us," Schultz said previously when discussing the opening of the first Ankara location.

"Building on the momentum we have achieved in Istanbul, we are very optimistic that our acceptance in Ankara will be no different. We look forward to bringing Starbucks not only to the current base of loyal customers in Istanbul and Ankara but also to other cities in Turkey where there is a growing demand for the Starbucks Experience,” he said at the time, signaling the then-unpredictable growth of the brand in the untapped Turkish market.

The course of growth in Turkey is not consistent with the fact that more coffee-consuming or coffee culture-producing nations are not generally big business for the chain, but, it is consistent when considering that the culture it created is very different from the existing one. There is one coffee culture, and there is another and imported one which secured an expansion with the right strategies. However, those alone are not enough to explain the occupation of the franchise in the local market. There is more to it than that.

A chain store like Starbucks offers sustainability and predictability among other things. One can be almost sure that the coffee they purchase at one franchise it will taste the same across the world, whether it's in Turkey's southeastern Şanlıurfa province or a store in Argentina. The standard maintained allows for customer trust and what earns the brand the loyalty of millions across the world.

“We already have an opinion about the coffee we would get at a certain price and among others, the quality of the services we would receive, in any of the chain brands’ stores,” Çokgezen went on to say, emphasizing that there is almost zero ambiguity for a person who steps into the store.

“This standardization is key since one can then decide whether they like or dislike the product, services or the prices,” he said.

While the core product at all chains or cafes is technically coffee, Çokgezen highlighted that additional factors come with a single cup of coffee can also be very much determinant when a customer chose the place. Internet access, a comfortable chair and a waiter-free time, during when a customer wouldn’t be bothered to order anything now and then, though spending as much time as he or she desires, can again be a quite leverage for the brand against more traditional cafes.

Today, how much the brand was accused of being culture-spoiling or how it tackled local cafes’ businesses are not the main debates anymore. The gaps Turkey’s market has lack back then gave the franchise to freely occupy those gaps with timely strategies that were developed to meet the ever-changing needs. Those also strengthen its presence in the market that challenges newly growing local chains. The challenge is real, yet not unachievable, and that the brand may see the upcoming period would be more competitive for it with new or growing players in the market.