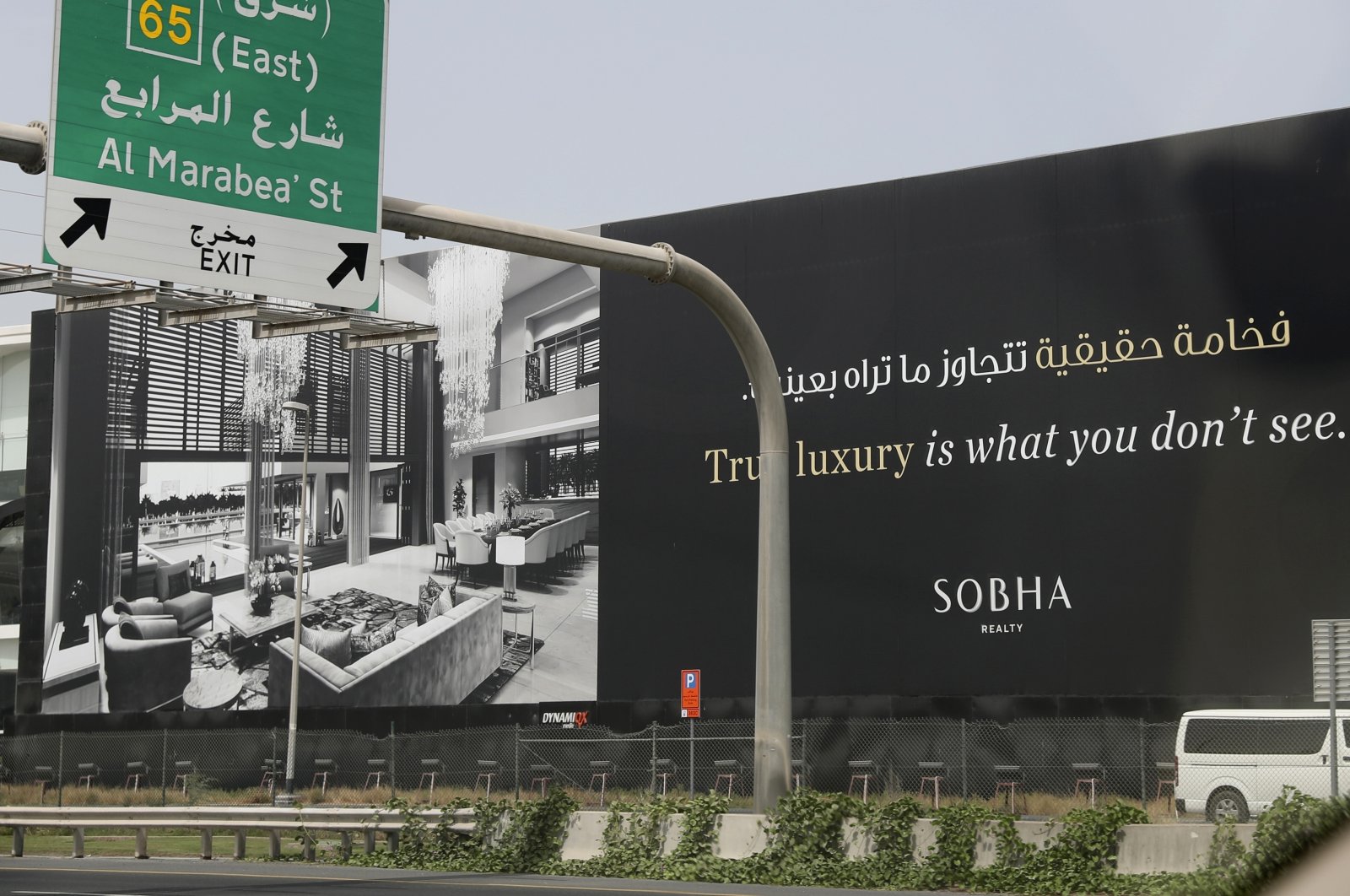 A billboard advertises a luxury residential project along a highway in Dubai, United Arab Emirates, May 5, 2021. (AP Photo)
by ASSOCIATED PRESS May 06, 2021 1:59 pm
RECOMMENDED

The world’s rich have apparently found a way to escape the COVID-19 pandemic lockdowns which have been imposed in many places around the globe.

Christophe Reech was fed up with London's pandemic lockdowns after living in the city for nearly three decades. This spring, he sold his luxury townhouse and jetted off to the desert sheikhdom of Dubai to start a new life with his family.

There was no turning back, he said. The French business magnate’s super-wealthy foreign friends were doing the same, driving an unprecedented surge in sales of Dubai's most-exclusive properties.

“Here in Dubai, there’s only one strategy: Business as usual,” said Reech, the chairperson of an eponymous group that owns real estate and financial technology companies. The philosophy is simple: “Let's make sure everyone's vaccinated and keep everything open."

“Of course that attracts people like me," he said.

As vaccines roll out unevenly worldwide and waves of infections force countries to extend restrictions, foreign buyers flush with cash have flooded Dubai's high-end property market, one of the few places in the world where they can dine, shop and do business in person. They're snapping up record numbers of luxury villas and penthouses, sending prices rocketing in this boom-and-bust market.

Sales of Dubai’s upscale properties, once slow, soared 230% in the first quarter of 2021, compared to the same period last year. Prices in some top-end areas rose as much as 40%, according to Property Finder, the country’s largest real-estate website.

A record-breaking 90 properties worth 10 million dirhams each ($2.7 million) changed hands last month, on top of 84 in March, surpassing heights hit eight years ago, according to real estate consultancy Property Monitor. For comparison, there were 54 such transactions in all of 2020.

"Tons of people are coming in and buying multimillion dollar properties on the spot, with no due diligence time whatsoever,” said Matthew Cooke, a partner at consultancy Knight Frank, who manages penthouse sales on Dubai’s Palm Jumeirah artificial archipelago.

As with previous cycles, cash buyers started snatching up homes at bargain prices and flipping them for profits. Analysts say this will continue until prices rise too high and returns diminish.

How long the craze lasts and what awaits the skyscraper-studded city then remains unclear. Home prices are still falling in the middle tiers of the city’s saturated property market, which has seen values drop sharply since peaks reached seven years ago due to overbuilding. Average residence sale prices in the Burj Khalifa, the world’s tallest building, collapsed to $400 per square foot this month from $1,300 in 2013.

“The market is going through a boom time ... but people are very aware that Dubai can run too quickly and it all falls apart," said Jackie Johns, partner at Premier Estates, an affiliate of Christie’s International Real Estate, referring to the debt-driven crisis that brought the city to its knees in 2008.

The hot streak in the luxury market isn't unique to Dubai, as ultra-low interest rates and families’ desire for more space has seen the wealthy in cities like New York and Paris decamp to suburban mansions. But there are other factors at play in the glitzy emirate, home to the long-haul carrier Emirates and the tallest tower on Earth.

Since first reopening to tourists last summer, Dubai has pitched itself as the world’s pandemic-friendly vacation spot. With no mandatory dayslong quarantines, foreign visitors now party in Dubai’s bustling bars and on its beaches, their selfies at hotel resorts and helicopter pads stirring resentment back home.

The tourist influx helped drive the country’s dramatic surge in coronavirus cases in January, prompting the United Kingdom to suspend flights. But the United Arab Emirates, with its young population and low mortality rates, has fared relatively well during the pandemic. The country of over 9 million, which relied heavily on the Chinese state-backed Sinopharm vaccine for its inoculation campaign, has administered 10.6 million vaccine doses.

A global financial center known as an oasis in the volatile Middle East, Dubai long has benefitted from capital flight. Homeowners on the Palm Jumeirah — which saw 43% of all April transactions — include Afghan warlords and the political elite from countries like Nigeria, Syria and Lebanon, all searching for a safe place to park their savings.

Now, a big share of wealthy buyers on this human-made archipelago, popularly known as the Palm, and in other exclusive villa communities in Dubai come from Europe, India, China and Russia, seeking a better quality of life as the pandemic rages. In March, the Palm logged its second-highest residential sale ever when a Swiss family bought a waterfront mansion for $30.2 million. Last month, an unidentified European family bought the city's third-most expensive home ever for $28.6 million.

Plentiful vaccines underpin that demand. Although questions surround the efficacy of the Sinopharm shot, Dubai offers other options, including Pfizer-BioNtech and Oxford-Astrazeneca. To get a jab, all one needs is a residence visa — which the city already extends to high-end property buyers and investors.

Reech, who plans to buy land in Dubai to build his dream home, booked a Pfizer appointment immediately after he received his residency. In the U.K., he said, he’d have to wait another four months.

New initiatives to lure affluent foreigners include remote work visas, retirement visas and long-term, renewable “golden” visas. In an unprecedented move, authorities are even offering Emirati citizenship to a select group of foreigners. To boost its brand as a cosmopolitan city, the UAE also has altered its strict Islamic legal code, allowing unmarried couples to live together and noncitizens to follow foreign laws for divorce and inheritance.

Dubai's vision for the post-pandemic high life has gained traction as foreign investors seek to "play a favorable role in the economic recovery,” said Robert Mogielnicki, a resident scholar at the Arab Gulf States Institute in Washington.

And even if the market's meteoric rise comes crashing down, the wealthy are unlikely to bear the brunt of the fallout, analysts say. If anything, the pandemic has shown the world's high flyers thrive in a crisis.

“The people who lose out are on the lower end,” Mogielnicki said.