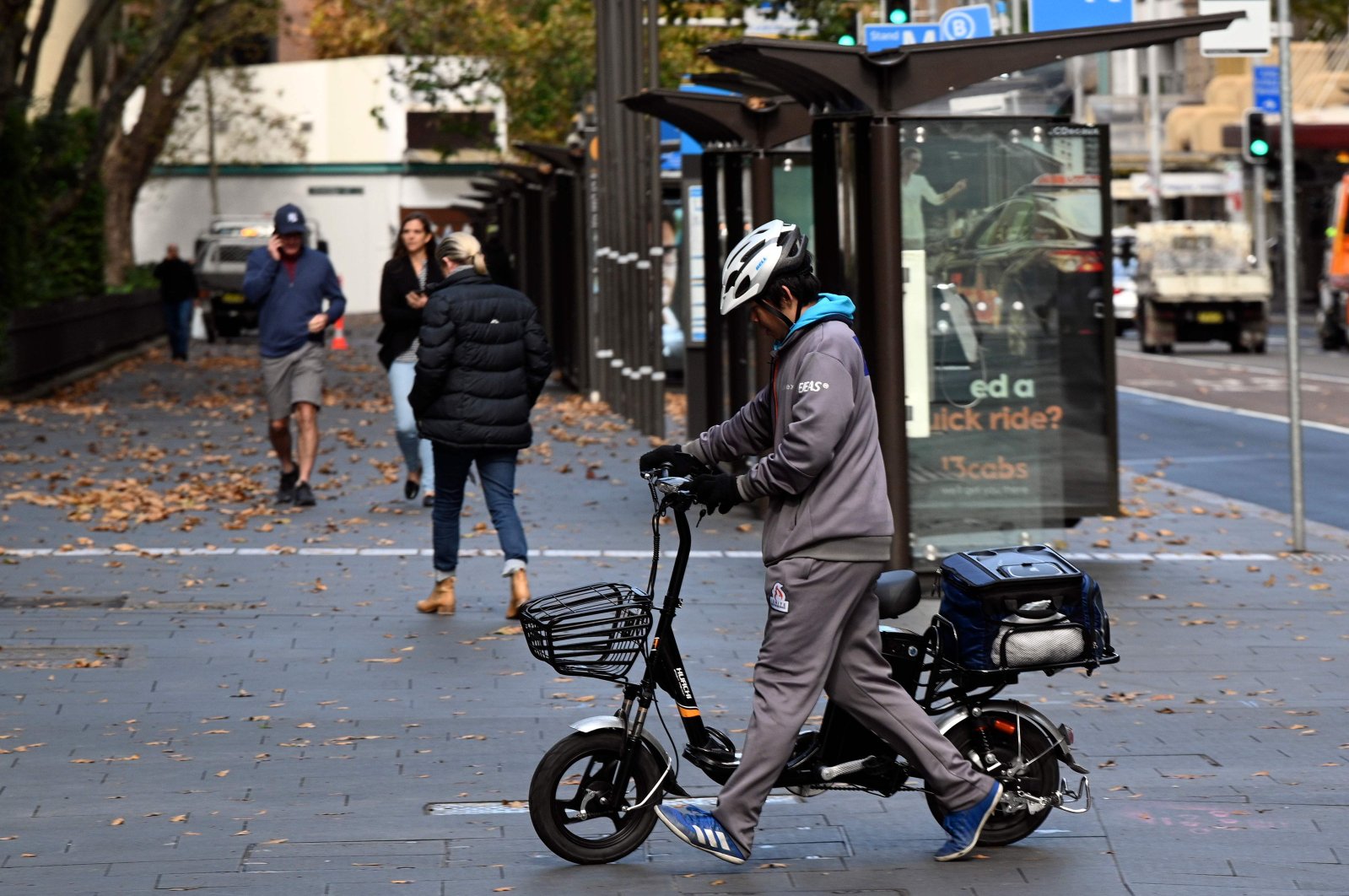 A courier crosses the road to deliver food in the central business district in Sydney, Australia, May 14, 2020. (AFP Photo)
by Compiled from Wire Services May 14, 2020 3:17 pm
RECOMMENDED

The unprecedented employment data provided a stark illustration of the pandemic's effect on the national economy, which had experienced an unbroken run of growth for more than two decades.

Compounding concerns about the economic hit is a diplomatic spat with China, Australia's largest trading partner, sparked by Morrison's call for an international inquiry into the origins of the new coronavirus.

"This is a tough day for Australia. A very tough day," Morrison told reporters in Canberra on Thursday. "Almost 600,000 jobs have been lost. Every one of them devastating for those Australians, for their families, for their communities."

His comments come as the Australian Bureau of Statistics (ABS) released monthly data that showed 594,300 jobs were lost in April, the largest fall on record, underscoring Morrison's decision to slowly begin reopening the country.

That was lower than the 8.3% forecast by economists in a Reuters poll, largely due to a significant decline in the number of people looking for work, including some people who are receiving an emergency "jobseeker" payment from the government.

If those people were included, the statistics office said, the unemployment rate would spike to 9.6%, the highest since 1997.

"The terms ‘unprecedented’ and ‘extraordinary’ are used regularly to describe the effects of COVID-19 on the economy but when discussing the impact on the job market, the terms are appropriate," said Craig James, chief economist at the Commonwealth Bank of Australia.

Australia imposed strict social distancing measures in March to tackle the pandemic, closing its borders to all noncitizens and ordering people to stay home unless on essential business. Pubs, sports centers, libraries and other public buildings were closed while cafes and restaurants were restricted to takeaway services.

Many shops and other businesses not explicitly ordered to close did so anyway in response to a drop in demand as people stayed home.

Officials have credited the lockdown measures with constraining the spread of the virus. Australia has recorded about 7,000 COVID-19 cases, including 98 deaths, significantly below the levels reported in North America and Europe.

New South Wales and Victoria, Australia's two most populous states, on Thursday reported just 13 new cases between them, including infections linked to an outbreak at a meat factory and a McDonald's Corp restaurant.

Morrison on Thursday stressed the need to move ahead with his government's three-step plan to remove all social distancing restrictions by July, a program that Treasurer Josh Frydenberg has said would increase gross domestic product by 9.4 billion Australian dollars each month.

Reopening the economy has been partly overshadowed, however, by a row with China, which took around 38% of all Australia's exports last year, over Australia's push for the coronavirus inquiry.

China earlier this week suspended the export licenses of several of Australia's largest beef processors and proposed tariffs of 80% on Australian barley shipments, actions viewed as retaliatory following a warning by the Chinese ambassador to Australia Cheng Jingye that Chinese consumers could boycott Australian products.

Australian Trade Minister Simon Birmingham has tried to smooth the waters, saying the beef ban was linked to labeling issues while the barley tariffs were related to an anti-dumping case, but acknowledged on Thursday that his Chinese counterpart had not responded to requests for a meeting.