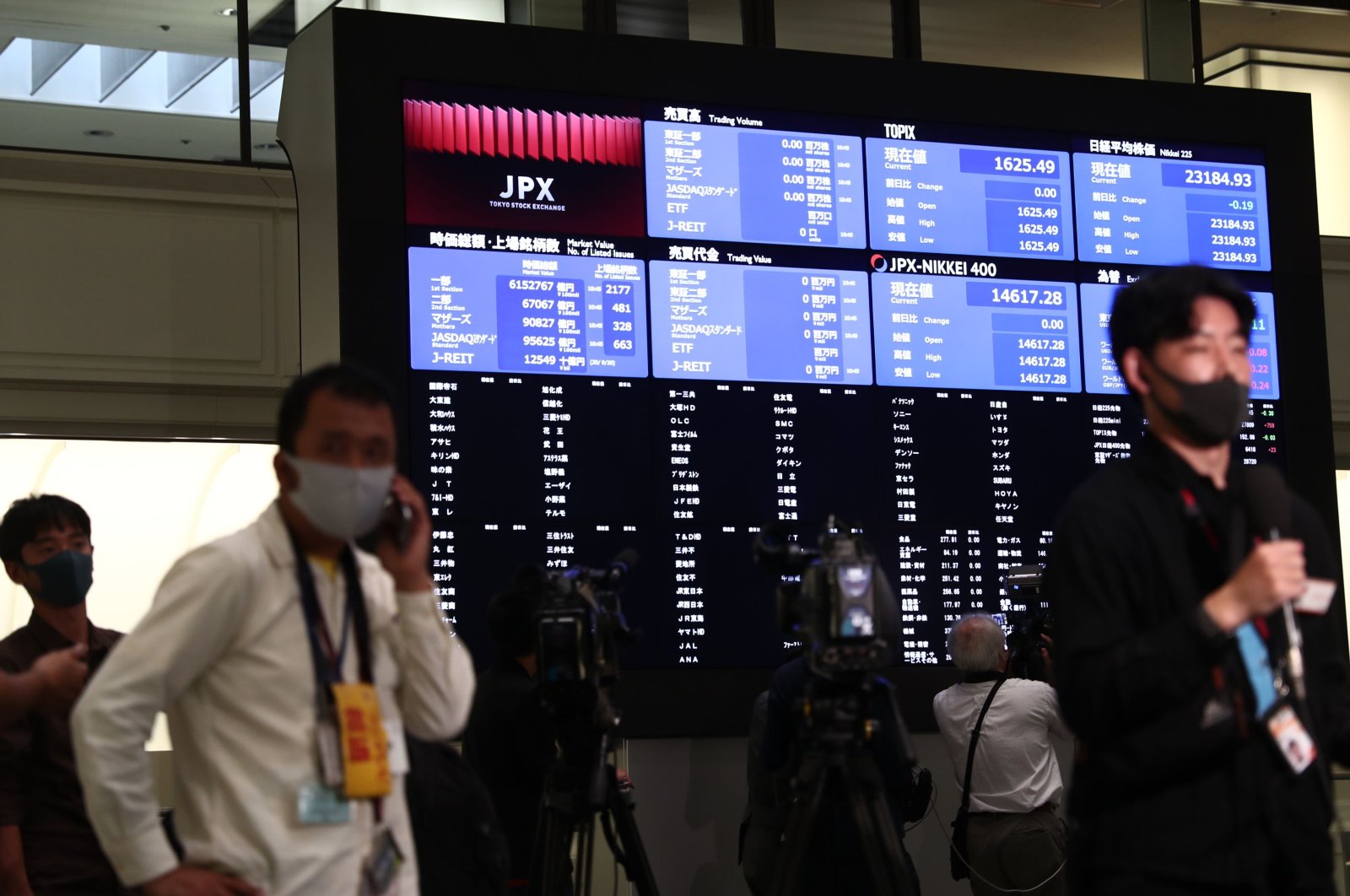 Journalists gather next to an information board inside the Tokyo Stock Exchange where trading was halted due to a glitch on the market in Tokyo, Oct. 1, 2020. (AFP Photo)
by Agencies
Oct 01, 2020 12:42 pm

Tokyo Stock Exchange (TSE) officials said they were working to get trading back to normal by Friday after a hardware failure shut down trading in the worst outage ever suffered by the world’s third-largest stock market.

There was no indication that the outage at the world's third-largest exchange resulted from hacking or other cybersecurity breaches.

“We are extremely sorry for the troubles we have caused,” exchange President and Chief Executive Koichiro Miyahara told reporters.

Miyahara and other exchange officials said a computer hardware device they called “machine one” failed and the backup “machine two” didn’t kick in, so stock price information was not being relayed properly.

The officials characterized the problem as a memory malfunction.

They said that rebooting the system during a trading session would have caused confusion for investors and other market participants.

The Japan Exchange Group is the world’s third largest bourse after the New York Stock Exchange and Nasdaq, with market capitalization of nearly $6 trillion.

The malfunction of basic hardware drew attention to vulnerabilities in the country's digital systems. Newly appointed Prime Minister Yoshihide Suga has made upgrading such infrastructure a priority, viewing it as critical to Japan's competitiveness.

Previous outages occurred when the huge “arrowhead” system created by Fujitsu to handle its electronic trading, which officials said involves some 350 servers, became overwhelmed with too many orders at one time.

That’s what happened on Oct. 9, 2018, according to a release on the TSE’s website. But during that disruption, some backup systems for trading continued to function as was the case in earlier outages.

The exchange promised to investigate, conduct malfunction tests and change the system to ensure that a flood of orders would not cause the entire system to stop working. Several top executives of the exchange were penalized.

Despite such occasional disruptions, Miyahara said the motto of the exchange was “never stop."

Foreigners account for about 70% of all brokerage trading in the Tokyo exchange, both in terms of value and volume, so news of the outage left investors both in Japan and overseas wondering what happened.

“I think it is very regrettable that investors are limited in their trading opportunities because they cannot trade on the exchanges," said Katsunobu Kato, the chief Cabinet secretary.

He said the Financial Services Agency had instructed the Japan Exchange Group and Tokyo Stock Exchange to investigate the cause of the outage and fix it.

Smaller regional bourses in Nagoya, Fukuoka and Sapporo were also forced to suspend trade because they use the TSE system, leaving the derivatives-focused Osaka Exchange as the only equity market still running in Japan on Thursday

“There will be a huge surge in trading volumes around the U.S. presidential election, and this does raise some concerns about the TSE’s ability to process a large increase in orders,” Hideyuki Ishiguro, senior strategist at Daiwa Securities, said.

Nikkei futures, which trade in Osaka, rose 0.56% Thursday, in line with a rise in U.S. stocks.

“We have to make sure this kind of situation is never repeated,” Japan’s top government spokesperson, Katsunobu Kato, told a news briefing, calling it “extremely regrettable."

While Tokyo has been eclipsed by Shanghai’s market in recent years, it is still a global hub for foreign investors. The volume of shares traded on the TSE’s main board was an average of 1.13 billion in the past 30 days.

The Nikkei fell 1.5% Wednesday, its biggest drop in two months, as an acrimonious debate between U.S. President Donald Trump and Democrat Joe Biden highlighted the risk of an inconclusive outcome to the presidential election.