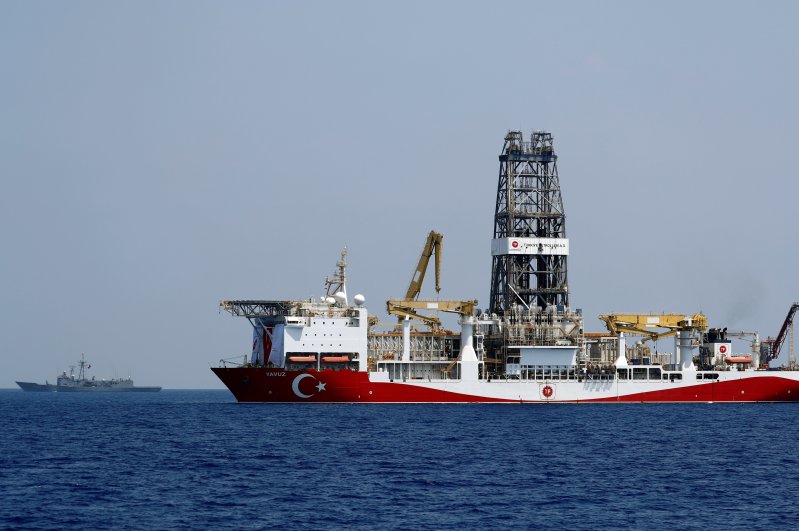 As part of the annual presidential program, Ankara aims to conduct five offshore drillings in the Eastern Mediterranean this year, while its newcomer is set to operate either in that region or the Black Sea

Turkey’s third drilling ship will be delivered from the U.K. within weeks, Energy Minister Fatih Dönmez announced Monday and said the country may soon allocate one of its drilling ships for operations in the Black Sea.

Speaking at the 3rd Turkey Energy and Natural Resources Summit, an event organized by Turkuvaz Media Group’s Para Magazine, Dönmez said the third drilling ship will begin its journey within days and is expected to arrive in Turkey in the coming weeks.

He added that the new ship is likely to operate either in the Eastern Mediterranean or the Black Sea, where drilling work has been suspended for a long time.

Turkey was reported to have bought the drillship on Feb. 9 for nearly $40 million. "Sertao" is worth much more, but Port Talbot officials reportedly were in a hurry to sell it. The drillship, which has been docked idle and unsold for nearly two years at the port of the Welsh town, has an estimated market value of $120 million. The drillship was produced by Samsung in South Korea. It was used by Brazil's Petrobras between 2012 and 2015.

The Marshall Island-flagged drillship has a length of 227 meters, a width of 42 meters and a draft of 12 meters. It can reach as much as 11,400 meters below sea level and drill to a depth of 3,000 meters below the sea bed.

Also addressing the meeting, Energy Deputy Minister Alparslan Bayraktar said the ministry is planning to start hydrocarbon exploration operations in the Black Sea in the second half of the 2020 and considering to allocate the first drillship Fatih for the task.

He added that the new drilling ship will also start operations in the second half of this year.

“We have prepared a medium-term exploration program that has planned our oil and gas exploration operations until 2023 and placed a special focus on explorations in the sea,” Bayraktar said.

In 1974, following a coup aimed at Cyprus' annexation by Greece, Ankara had to intervene as a guarantor power. The TRNC was founded in 1983.

The decades since have seen several attempts to resolve the Cyprus dispute, all ending in failure. The latest one, held with the participation of the guarantor countries – Turkey, Greece and the U.K. – came to an end without any progress in 2017 in Switzerland.

As a guarantor nation for the TRNC, Ankara is currently carrying out hydrocarbon exploration activities in the Eastern Mediterranean with two drilling vessels Fatih and Yavuz, along with the Oruç Reis and Barbaros Hayrettin Paşa seismic vessels in the same region.

As part of Turkey's Annual Presidential Program for 2020 announced on Nov. 4 last year, Turkey plans to conduct five offshore drillings in the Eastern Mediterranean this year, which Dönmez said will continue at pace.

The country’s exploration and drilling activities in the region expanded to a great extent in 2019 as Fatih and Yavuz completed five drillings.

Dönmez also said with the signing of the pact with Libya's U.N.-recognized Government of National Accord (GNA) on Nov. 27 last year, the Eastern Mediterranean’s maritime jurisdiction zones have become clearer to enable further exploration in the region.

The maritime delimitation agreement, which secured both countries' western border in the sea, was a response to the attempt to sideline Turkey and the TRNC in the Eastern Mediterranean.

In reference to the EastMed pipeline project, whose agreement was signed between Greece, Israel and the Greek Cypriot administration on Jan. 1 to bring gas to Europe, he declared “the realization of the project is just a dream."

The project to build a 1,900-kilometer (1,180-mile) natural gas pipeline to run from Israel through Southern Cyprus, Crete, Greece and ultimately to Italy has no economic viability and lacks any legal justification, he explained.

The minister added that Turkey is set to become a key player in the regional energy supply through the Trans-Anatolian Natural Gas Pipeline (TANAP), which delivers natural gas from Azerbaijan through Turkey and on to Europe, and TurkStream, which transmits Russian natural gas to Turkey and Europe under the Black Sea.

"These two projects will contribute to our national energy supply security,” Dönmez said.

Dönmez also said Turkey is planning to build a pilot production facility in Turkey to recycle lithium from boron production waste in the last quarter of this year.

The minister said the rapidly developing battery technologies for electric vehicles has thrown the development of lithium batteries into the spotlight and it could mean new opportunities for Turkey.

“China is leading development in this area, but Turkey also wants to avail of the positive preliminary findings in lithium, which can be found in boron – an abundant resource in the country.”

Through the boron production process, purified lithium in boron will be extracted for use as a raw material in the industrial sector, he elaborated.